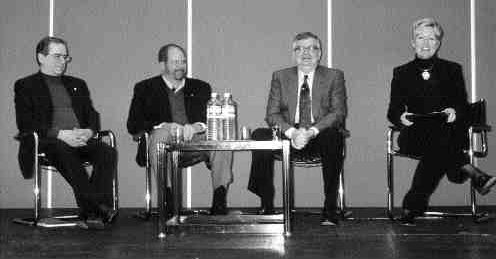 Although the pulp and paper industry has progressed a lot in terms of environmental excellence, it should not rest on its laurels. Instead, it should take this opportunity to be a leader among all oth…

Although the pulp and paper industry has progressed a lot in terms of environmental excellence, it should not rest on its laurels. Instead, it should take this opportunity to be a leader among all other industries.

“The improvement in attitude, I think, is the most significant progress that this industry is making,” said Frank Dottori, Tembec President and CEO.

Dottori stressed that it is not enough for the industry to jump into the bandwagon with other industries. Rather, the industry should take charge.

“We’ve been persecuted for 20 years, and this is the perfect opportunity for the industry to take charge, be a leader.”

At the discussion moderated by Sally Love of Paragon Management Consulting, the CEOs addressed questions pertaining to the theme of environmental excellence, mergers, partnering and globalization. Dottori was joined by John Weaver, President and CEO, Abitibi-Consolidated Inc., and Jerome Tatar, President, CEO and Chairman of the Board, Mead Corporation, at the Environmental Conference’s CEO Panel, organized by TAPPI and co-sponsored by PAPTAC, NCASI and USDA Forest Service, on April 8, 2002.

When asked to define what environmental excellence means, Weaver said it is the attitude in the organization that the industry needs to have. And the only way in achieving this attitude is synergy.

“We’ve left environmental compliance to environmental guys, but now it should be every person in every mill — it has become everybody’s job.”

For Tatar, the environmental community is not anymore one side of the business.

“You can’t grow a business without thinking of environmental excellence,” he said. “You can not separate the two anymore — we have an obligation.”

Tatar explained that the CEOs are not demanding perfection, but they have a vision of how good the industry can be, and everything should be done to achieve that vision. Weaver supported this claim, and further suggested that there should be a forum to discuss ideas on achieving excellence.

“We want to steal everybody else’s ideas and come up with the best approaches,” Weaver said. “So it is important to have a meeting place of sorts.”

Dottori, for his part, has come up with policies to achieve environmental excellence at his company. For one, he implemented zero-tolerance policy at Tembec.

“The government has public relations people to make us look bad sometimes,” he said. “That is why we have zero-tolerance, because one mistake can haunt you for years.” He also suggested that companies must be certified by a third party in order to avoid controversies.

When asked by the audience why the CEOs are concerned about environmental excellence on a personal level, Tatar explained that he does not want to work for a company that does not care about the environment. “I want to be proud of my business,” he said.

He stressed unity once again, and appealed to the audience to work together to achieve environmental excellence.

“It’s not which company is the greenest or the most environmental of all, because at the end of the day, it all reflects on the whole industry.”