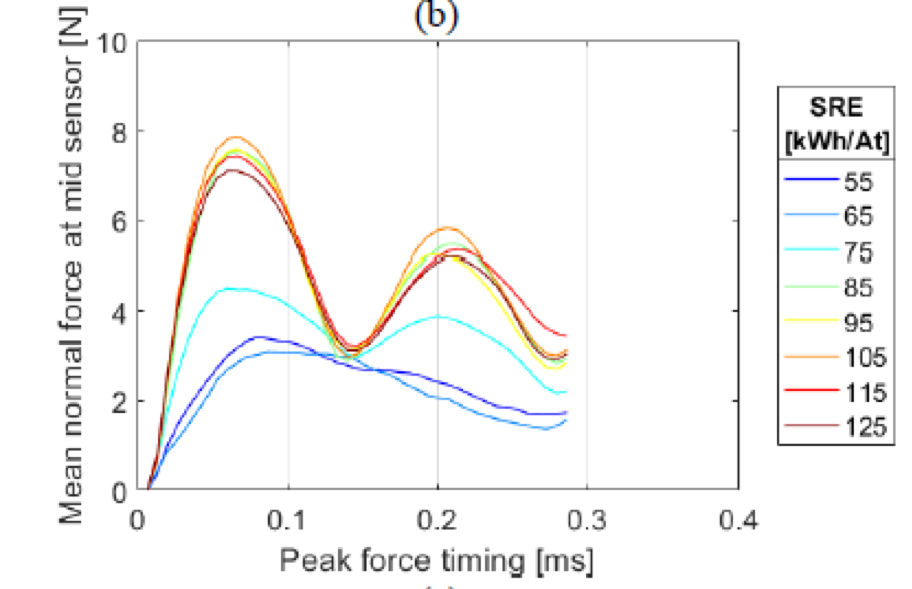 Figure 1. Measurements of the force profile at the mid-radial position in mill-scale, low consistency refiner as a function of specific refining energy (SRE). As SRE is increased, there is a transition from a single peak to two peaks in the force profile. (Image: University of Victoria)

The 32nd International Mechanical Pulping Conference (IMPC) was held at the University of British Columbia in Vancouver from June 5 to 8, 2022. The conference was in person but offered the possibility of attending virtually. This was fortunate because a number of participants, including the author of this report, came down with Covid and were only able to attend while isolating in their hotel rooms.

Jan Hill, of QualTech AB, in his closing summary of the proceedings, made some comparisons to previous conferences.  In 1977, when refining was gaining ground on groundwood, the IMPC attracted over 700 attendees. This year 106 in-person and 13 virtually attended from 46 organizations representing 10 countries.  Although part of this change can be attributed to the effect of the pandemic on travel and discretionary time, it is also an indication that mechanical pulping is a mature technology and improvement and optimization is expected to be incremental in the future.

Since 1987, when the conference was in Vancouver, the topics of interest have shifted from process to product, printing to packaging, brightness to darker products and opacity to bulk.  This is primarily driven by the decline in newsprint and the need to reposition mechanical pulp as a raw material for packaging, board, and tissue grades.

Hill admonished the practice of some authors, which has become common in many conferences, of not supplying pre-prints of their papers. He stated that there is a need to share in order to make progress. He also noted that many papers focused on strong and long fibres. But what about bond strength? Isn’t this more important?

Two-thirds of the contributions came from universities. Research institutes, which occupied the vital position between fundamental science and commercial application, have all but abandoned mechanical pulping research. In-company research has also diminished, which has further impeded progress.  He gave the example of Noske Skog’s Boyer mill in Australia which established in the 1970’s that only a primary refiner is necessary. The original pulping line is still intact and he attributes the mills foresight to having their own R&D group and pilot facilities.  Worldwide, there are now gaps at the industry, supplier and institute level that will make further development of mechanical pulping difficult. In this environment, he said it is better to invest in staff than steel.

Quo Vadimus? (Where do we go?) was the title of the opening keynote presentation given by industry veteran Mike Jackson of MJ Consultants Inc.  At the 1977 IMPC, Jaakko Pöyry said that the Achilles heel of mechanical pulping was the high energy requirement. Mike then proceeded to list all the energy-saving technologies that have been implemented in the intervening years. These technologies include steam recovery, higher rotational speeds, interstage screening, chemical impregnation, low consistency refining, pulp quality monitoring, and plate design.  Increasing the rotational speed of refiners often results in higher production rates, probably by reducing reverse flows, which lowers the required energy.  Interstage screening can reduce the energy required in the primary refiners by 10 to 15 percent.  When combined with interstage bleaching, the energy savings can be even greater. Low consistency refining following a high consistency primary TMP refiner can lower energy consumption in printing and writing grades by three to 10 percent. It can do so by 10 to 15 percent following a BCTMP primary refiner for softwood or hardwood board grades. Yet another means to reduce energy consumption by up to 20 percent is the use of turbine segments that have optimized pumping angles.

But the true Achilles heel for mechanical pulp has been the demise of newsprint. According to Mike’s numbers, global demand for newsprint has shrunk from 28,000 to 11,800 tonnes in the years 2013 to 2022. However, the consumption of high-yield market pulp has remained stable during this period. But there could be turmoil in this market as 6 Mt per year of new production has been announced to come onstream in the next few years. The future of mechanical pulp depends on finding new product applications.

The conference also had some research contributions. Matthias Aigner of the University of Victoria in his paper “Bar force profiles in LC refining”, described measurements using piezo electric force sensors in a 16-inch laboratory-scale and a 52-inch mill-scale, low consistency refiner.  Each sensor replaces a short length of a stator bar and measures normal and shear forces applied during the passage of each rotor bar. A single force sensor was used in the laboratory refiner experiments whereas three forces sensors were placed at different radial positions in the mill-scale refiner.

In the pilot refiner experiments, at low Specific Refining Energy (SRE), there is a single peak in the force profile near where the bars pass. This peak is thought to be a compressive force which leads to fibre development. At higher SRE, a second peak appears in the force profile where the bars begin to cross. This peak is associated with an increase in the corner force which leads to fibre cutting. In the mill-scale, LC refiner measurements, the force sensors at the inner and outer radial positions are measured at single peak at all values of SRE. However, the sensor located at the mid-radial position measured the transition from a single to a double peak in the force profile as the SRE was increased (Figure 1). This behaviour is similar to that observed in laboratory refiner experiments.

This work provides insight into the mechanics of LC refining and the potential for these sensors to be used to evaluate plate design and perhaps act as a tool for refiner control.

In a thought-provoking paper entitled “Opportunities and challenges in describing the heterogeneity of fibres”, Olof Ferritsius of Mid Sweden University FSCN Research Centre demonstrated that using average values for properties such as curl, degree of fibrillation and fibre length might not only be misleading, but in some cases erroneous. Fibre properties have non-Gaussian distributions. This means that a simple average of fibre lengths will over-emphasize the lengths of the more numerous short fibres and fines. The average from length-weighted fibre length partially corrects for this by putting more importance on the long fibres, but ignores the observation that fibre coarseness is proportional to fibre length. The author gives an example for change in fibre length after CTMP pulping. The arithmetic mean would give a higher average fibre length with roundwood as opposed to sawmill chips. In contrast, the length-length average would give the opposite (and more correct) answer. The length-weighted average shows no difference between roundwood and sawmill chips. 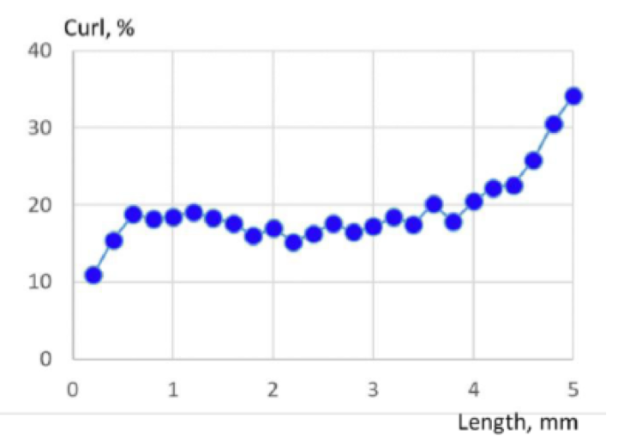 The other properties studied were the curl and fibrillation of TMP fibres. One typically expects that the longest fibres have a dominant role in determining the strength of paper. Length is important but even more significant is the degree of fibre development which is related to fibre-to-fibre bonding. Fibre curl is one measure of development. Plotting the arithmetic average values of curl versus average fibre length in 0.2 mm increments seems to indicate that the long fibres are curlier (Figure 2).

However, a different trend is evident when plotting the number of fibres with a specific curl and fibre length (Fig. 3). The degree of fibrillation of these fibres ranges from low (blue) to high (orange) as indicated by the legend in Figure 3. The long fibres have low levels of curl and fibrillation and are therefore poorly developed.  The average curl and degree of fibrillation is dominated by fibres of medium length ranging from 0.6 to 1.2 mm. Although this range contains 90 percent of the fibres with curl over 90 percent, it also has a high number of fibres with low curl. The higher average curl of the longest fibres was caused by the lack of really low curl values, rather than the presence of high curl values. Fibre development probably leads to some breakage at these refining conditions. 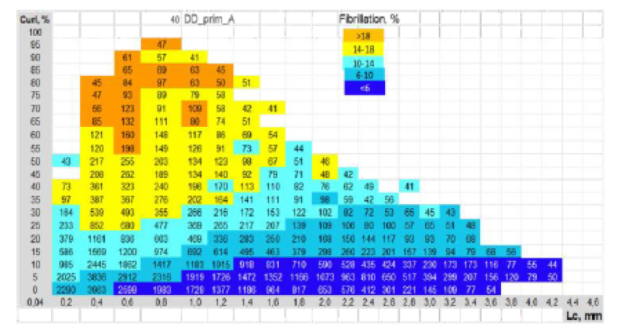 Figure 3. Curl of TMP fibres plotted against fibre length at 0.2 mm intervals. The number of fibres with a given curl of at a given length are shown in the figure. The colours represent the degree of fibrillation as shown in the legend. (Image: Mid-Sweden University)

Christer Sandberg of Mid Sweden University, FSCN and Holmen Paper AB presented the paper “New centre-plate design improves DD refiner performance”. This plate design by Valmet reduces the free volume in the centre of the plate thereby forcing chips to flow towards the breaker bars (figure 4). This diminishes steam backflow, gives better refiner stability and fewer production swings which permits increased production. The first installation of these plates was at the Holmen’s Braviken mill. The plates produced longer fibre at the same tensile index and required less dilution water and steam demand. The power and gap variation were decreased by 70 percent which has allowed higher production rates. These results have been confirmed by trials at the Stora Enso Kvarnsveden mill. 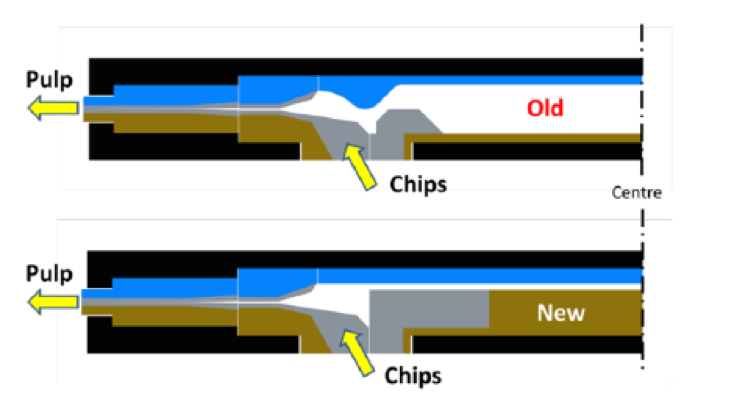 Figure 4a (l) Comparison of traditional and centre plate designs for 4b (r) double disk refiners. 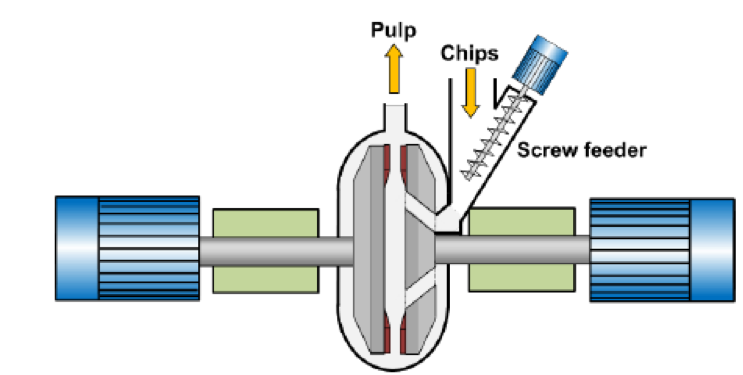 The conference ended with an announcement that the next International Mechanical Pulping Conference will be held in Sundsval, Sweden in 2024.