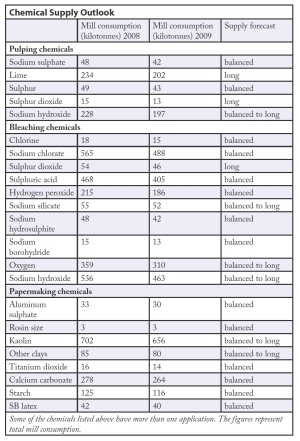 There’s no light at the end of the tunnel, but Canadian pulp and paper producers must be thinking there’s an oncoming train anyway. Papermakers were already suffering when most resource industries wer…

There’s no light at the end of the tunnel, but Canadian pulp and paper producers must be thinking there’s an oncoming train anyway. Papermakers were already suffering when most resource industries were riding high. Now that the rest of the economy has tumbled, the paper sector is bleeding to death.

In its fall 2009 outlook, the Conference Board of Canada said it expected the country’s paper products industry to lose more than $1 billion in 2009. This would be the seventh consecutive year of losses for the industry and the largest on record.

“The recession brought on such a rapid decline in demand that paper producers were unable to cut production quickly enough, leading to rising inventories and falling prices,” said Michael Burt, associate director, Canadian industrial outlook. “What’s more, the industry will be permanently smaller because of lower demand for paper products going forward.”

The board estimated that annual production of paper products would fall by 14% in 2009. It expects even lower output this year, marking six consecutive years of decline.

According to Statistics Canada, capacity utilization in the paper industry stood at 81.2% during the fourth quarter of 2008. By the third quarter of 2009, it had fallen to 74.3%.

The chemical industry also had a tough year, as demand for basic chemicals and resins fell across the supply chain. Total Canadian chemical shipments fell by 35% to $16.6 billion in 2009 and producers of most chemicals had to scramble to reduce output and hold the inventory buildup to manageable levels. The drop in demand for chemicals was mainly attributed to declines in the automotive, housing, and pulp and paper industries. It is now believed that Canadian industrial production bottomed out in the second quarter of 2009. A tentative recovery appears to be underway in most sectors and chemical sales are expected to recover modestly this year.

According to a year-end survey of the Chemical Industry Association of Canada, chemical prices declined by about 12% last year, as customers demanded and won price concessions. But the price decline was not immediate or uniform.

Caustic soda prices had climbed steadily through 2008 to reach record levels of nearly US$1100/tonne by the end of the year. Demand fell off as industrial activity slowed, but the chloralkali industry was able to prop up high caustic prices by throttling back production: the operating rate in the first quarter was estimated at 70%, down from 91% in the corresponding period of 2008. Even at the end of April, caustic prices were over US$800/tonne. This level proved unsustainable. Caustic prices plummeted for five months, eventually falling below US$200/tonne in November.

The chloralkali industry expects ECU pricing (combined chlorine and caustic soda) in North America to trend upward this year after bottoming in the past third quarter. Prices won’t approach the record levels of early 2009, but sales volumes should improve. The supply in western Canada will grow in the second half when Canexus completes the technology conversion project at its North Vancouver plant. The project was 70% complete by December. The company expects a 22% volume increase in 2010 as it ramps production up to the design level of 210 kt/yr of chlorine and 230 kt/yr of caustic, which represents a total capacity boost of 35%. Canexus also expects to complete a hydrochloric acid expansion at North Vancouver in June. That project will improve operating flexibility, as Canexus will have the option of diverting more chlorine to the acid plant during periods of strong caustic demand.

As long as high caustic prices continued to provide strong ECU returns, chloralkali producers were content to let chlorine prices slide to the $170/tonne range. Once caustic prices fell and production was cut back, chlorine supply tightened noticeably. By the end of 2009, producers had been able to push chlorine prices back over the US$300/tonne level. This is consistent with 2004-2007 pricing levels.

Canadian lime production was consistently running 25-30% below 2008 levels through the first ten months of 2009. Lime is used in the kraft pulping process to reconvert sodium carbonate into caustic soda. The byproduct, calcium carbonate, is recalcined in a kiln to recover lime for reuse. Most pulp mills operate their own kilns, so merchant producers typically only supply makeup lime to the industry. The cost of lime -either purchased or produced onsite -is closely related to the cost of energy.

The price of elemental sulphur went through the roof in 2008, approaching US$700/tonne in late summer. Then it crashed through the floor in 2009: by August, producers were barely able to get US$25/tonne. The overriding factor in these price swings was strong demand for fertilizer production in India and China, which tailed off as the global economic outlook soured in the second half of 2008. During the period of high prices, some Canadian sulfur stockpiles at sour gas and oil sands plants were remelted to meet increased demand for overseas trade until the market collapsed.

Capacity rationalization carried out by sodium chlorate producers in the middle of the decade made for a tight market in 2007 and 2008. This eased considerably with reduced pulp production levels during 2009, but chlorate selling prices were reported to be up by about 10% for much of the year. As in 2005 and 2006, chlorate producers were quick to adjust production levels to match market conditions. Erco Worldwide idled its plant in Valdosta, Ga., for a period in the second quarter, while Eka Chemicals permanently closed a facility in Norway.

In Canada, Canexus permanently ceased operations at its plant at Bruderheim, Alta., in April. The closure of the 72-kt/yr plant was largely unexpected, but Canexus has gone on record as being committed to reviewing its sodium chlorate capacity on a location-by-location basis in light of the prevailing market conditions. The Bruderheim plant was commissioned in 1992 and had undergone at least two capacity expansions. Output from the plant served the pulp industry in the area and product was also bagged for export to the U.S. The company said the Bruderheim site -located northeast of Edmonton -would continue to be used as a terminal operation to support regional chloralkali sales.

In its outlook for 2010, Canexus said sodium chlorate sales volumes in North America should be about 9% higher than in 2009, but this gain will be more than offset by lower realized prices. The company also noted that a period of relatively lower prices in the latter part of 2009 and into 2010 could result in the closure of higher-cost sodium chlorate production capacity on the continent, supporting supply/demand balance.

There was considerable upheaval in sulphuric acid markets during 2009. Demand was strong entering the year, but fell sharply as the global recession took hold. By early March, Noranda’s sulphuric acid storage capacity was nearly full and its sales agent, Xstrata Canada, was unable to arrange for sales and/or temporary storage in quantities equal to t
he current rate of production. Consequently, production of sulphuric acid and zinc were reduced by approximately 20%. The curtailment continued until October. Another event that reduced the sulphuric acid inventory overhang was a strike at the Vale Inco operations in Sudbury, Ont.

Of more lasting effect was the decision by Xstrata to shutter its Kidd metallurgical site near Timmins, Ont. This permanently eliminated two sulphuric acid plants with total capacity of 560 kt/yr, though these units had been running at reduced rates since 2008.

Also eliminated at Kidd was the sulphur dioxide plant, which was capable of producing 30 kt/yr but had only been producing half that amount in recent years. Chemtrade Logistics markets the sulphur dioxide from Kidd. The company said production has been sporadic, as the chemical is in a real oversupply situation, and the plant closure will go unnoticed. Output from the plant primarily went to eastern Canadian paper mills, but some product was being shipped to the U.S. for other applications. Chemtrade described the sulphur dioxide market as mature. The chemical is being substituted in pulp bleaching and water treatment applications with sodium hydrosulfite and sodium bisulfite. Users have been switching to avoid the some of the dangerous handling conditions with liquid sulphur dioxide.

After a 5% increase in 2008, Canadian production of hydrogen peroxide was down by nearly 20% in the first half of 2009. Pulp and paper is by far the dominant market for peroxide in Canada. The chemical is used to bleach chemithermomechanical pulps and mechanical pulps for groundwood specialties. Recent demand growth has been driven by its use in deinking newsprint.

Industrial gas producers (Air Liquide, Praxair, Air Products) raised merchant prices for oxygen by 10% during the fourth quarter of 2009. It is interesting to note that one of the reasons given for the increase was production and distribution inefficiencies resulting from variations in customer requirements. Some mills are supplied by onsite oxygen plants operated by the supplier: the profitability of such operations would likely be compromised by fluctuating demand.

Prices rising for pigments and fillers

The leading suppliers of paper fillers, Imerys and KaMin, raised prices at the end of 2009 to cover rising costs in logistics, mining, chemicals, fuel, and power. On average, prices went up by 5-7% for kaolin (including calcined products) and by 2-3% for ground calcium carbonate. Surcharges linked to natural gas and/or crude oil prices remained in effect.

A gradual improvement in demand encouraged Kronos Worldwide, DuPont Titanium Technologies, Tronox, Huntsman, and Cristal Global to resume their efforts to raise prices during the summer. Nevertheless, indications are that prices remained fairly flat at US$1.04/lb through the second half of 2009.

A significant reduction in demand from the paper industry more than offset growth in other water treatment applications, so aluminum sulphate production in Canada was down by nearly 10% in the first half of 2009. Alum production had been on an upward trend, climbing by more than 20% in 2007 and a further 12% in 2008.

Sales of specialty chemicals used in pulp and paper were down in line with reduced mill production. There were no significant price increases for such products as sizing agents, wet strength additives and retention/drainage aids during the year, but BASF and Dow Chemical raised prices for emulsion polymers – including styrene-butadiene latex products -by 5-10 cents/pound during the summer.

Bob Douglas is publisher of Camford Chemical Report, a weekly newsletter on Canada’s chemical processing industries, and CPI Product Profiles, a series of 200 data sheets on markets for individual chemical products. Bob has more than 25 years of experience tracking developments in pulp and paper technologies and analyzing trends in chemical and energy supply, demand and prices.