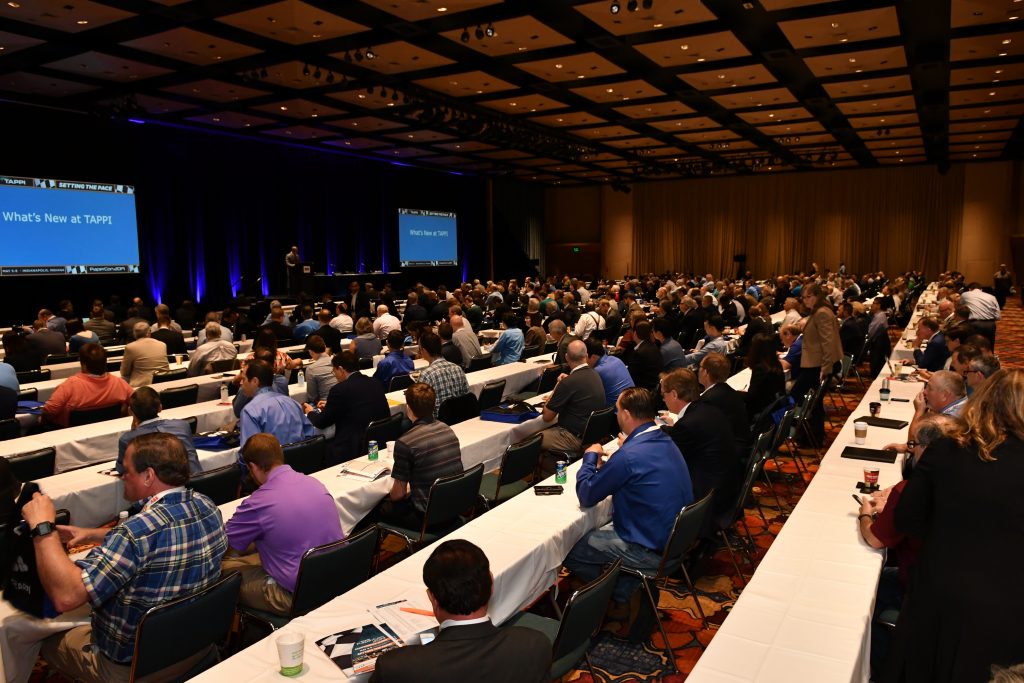 The opening keynote at TAPPI’s PaperCon 2019 conference, which was co-located with the 2019 International Paper Physics Conference. Photo courtesy TAPPI

The International Paper Physics Conference was held in Indianapolis, Indiana on May 5-8 in conjunction with TAPPI’s PaperCon. There were 31 papers in nine sessions covering the following topics: mechanical response of fibres, paper and board, moisture transport in tissue and paper, paper chemistry, water removal, converting and formability and the role of fines and nanocellulose in paper.

The conference opened with a tribute to the late Derek Page, a founding member of the Paper Physics Committee and formidable presence at Paper Physics Conferences and Fundamental Research Symposia. Paper copies of the J-FOR issue honouring Dr. Page, who spent much of his career as a researcher at Paprican (now FPInnovations) in Montreal, were reprinted by PAPTAC for those in attendance. The issue includes reviews of Page’s seminal work on paper strength and fibre properties as well as the latest research that builds on his ideas.

Here are some highlights from current research shared at the Paper Physics Conference.

Hygiene products are a growing segment of the paper industry and appropriately, a growing amount of open research is being devoted to this sector. Absorption of water is a key characteristic for towel and tissue. In most cases, this should be as quick as possible. The mechanism seems obvious – water flows into the voids between the fibres. Where else would water go? Surprisingly, water flows along the fibres, not as a uniform front, but in a very chaotic manner.

Two papers described these flows in detail: “Measurement of the dynamics of fluid sorption of tissue papers,” by Konrad Olejnik of Lodz University of Technology, and “Mesoscale liquid absorption properties of towel papers,” by Steven Keller of Miami University. Both papers used image analysis to analyze the advancing liquid in towelling or tissue. The heterogeneity of the towel structure caused by creping, fibre alignment and z-direction uniformity all affect wetting behaviour. The resulting water absorption causes structural changes such as fibre deformation and loss of bonds.

A lengthy discussion followed about using the Lucas-Washburn equation to model water absorption. This equation was derived for a porous media consisting of parallel cylindrical tubes for which there is an exact analytical solution. Although absorption measurements often follow the square-root of time dependence expected from the L-W equation, clearly the fibre matrix has a more complex structure than cylindrical tubes. The real mechanism depends on the solid elements rather than the voids. A new approach is required, either based on thermodynamics to account for the change in entropy as the fibre surfaces are wetted or a non-linear approach to recognize the chaotic nature of the advancing liquid front.

Dimensional stability of paper – in particular curl – is a key property in many paper products. This out-of-plane deformation of paper is caused by hygroexpansion and requires 3D models to identify key features. The challenge for 3D models is to have sufficient complexity to represent real effects but not exceed realistic computing times.

In his paper, “The role of the fibre and bond in hygroexpansion and curl of paper,” Artem Kulachenko of KTH Royal Institute of Technology described a non-linear, finite-element model using beam elements for fibres and beam-to-beam contact for fibre bonds. The results confirmed that the transverse expansion of fibres when exposed to water is a key factor in producing curl. However, the effect of longitudinal expansion is also significant and can account for up to 40 per cent of the deformation.

Surface roughness on the fibre level

Some of the most elegant work in paper physics has been the application of statistical geometry for well-defined random networks to describe paper properties from the characteristics of individual fibres. Almost every paper property including pore size, density and network uniformity has been previously modeled in terms of fibre morphology.

One of the remaining properties, surface roughness, was addressed by William Sampson from the University of Manchester in his paper “Fibre-level model of paper roughness.” He showed that the arithmetical average roughness (Ra) and the root-mean squared roughness (Rq) can be expressed as simple functions of paper porosity and fibre thickness.

A new standard for compression strength

Packaging is a large sector of the paper industry and some key aspects of paperboard were covered in this meeting. Compressive strength of corrugating medium is typically determined by the Concora Medium Test (CMT – ISO 7263), which is the compressive force at failure of a strip of flutes held in place by adhesive tape.

This test has several shortcomings, which include dependence on the properties of the adhesive tape, handling and preparation by the operator, and the fact that the failure mechanism can vary between buckling or delamination. To overcome these problems, Heinz-Joachim Schaffrath of the Technical University of Darmstadt described a new test in his paper “Compressive strength of an in S-shape fixed sample.”

The test is derived from the short-span compression test using jaws that are displaced in parallel planes such that the paper takes a S-shape before it compresses. In effect, this measurement is on one-half of a flute and eliminates the problems with adhesive tape and sample preparation. The S-value depends on stiffness and buckling behaviour of the board and correlates well with CMT and FCT measurements.

The precision is lower than the CMT, probably because the CMT test measures several flutes simultaneously whereas the S-test only measures one. This method is about to become a German DIN standard and has been proposed as an international standard.

In order to make a box, the material must be creased and folded. During this process, the board may crack, causing a defect that could lead to a failure of the box. An important endeavour is to develop tests that can measure the “right” properties of the boxboard and the forces exerted by creasing tools to anticipate folder-cracking problems and make corrections.

Tuomas Turpeinen of VTT Technical Research Centre of Finland demonstrated that a picture is worth a thousand words by using high-speed CCD imaging to determine the local strain rates when a board is deformed in his paper “Deformation dynamics in creasing and folding of board.” The images confirmed earlier model predictions of local shear strains for double-coated boards. They were also able to distinguish two qualitatively different delamination modes. In one of the modes, which appeared when relatively thick board was forced into a narrow groove, there was an unexpected expansion in the thickness direction, which has not been predicted by existing models.

Another paper on boxboard creasing entitled “On characterizing creasing severity that affects reverse-side cracking” was presented by Joel Panek of WestRock. Criteria for onset of creasing can be determined by means of equations that account for the geometry of the creasing equipment and the mechanical properties of the board.

This work derived an expression for crease draw, the deformation along the crease, which can be computed for much deeper draws than the previously developed expression. The severity of creasing can be characterized by crease draw and crease shear angle. Draw length was correlated with reverse-side cracking after a 180-degree angle reverse fold of a creased sample. Plotting penetration depth versus nominal clearance (distance between the board and side wall of creasing groove) is a practical way to identify the critical creasing threshold.

The process of papermaking is also traditionally included in this conference. A new approach to papermaking called “foam forming” was described. In contrast to traditional papermaking where most of the machine is devoted to water removal by pressure and heat, foam forming offers the promise of making paper with significantly less water and higher solids entering the dryer section. In addition, it offers the ability to tailor paper properties.

In his paper “Unique compression behaviour of foam-formed sheets in wet pressing and calendering,” Jukka Ketoja of VTT Technical Research Centre of Finland showed that even after pressing and calendering, foam-formed paper grades are bulkier than conventionally made paper. Foam forming adds a gaussian component to the conventional log-normal pore size distribution that can be controlled with bubble size. This feature means paper porosity and bulk can be tuned to desired values.

The discussion on these and other topics will continue at the Paper Physics Seminar in Jyväskylä, Finland (June 1-5, 2020).

J. David McDonald is president of JDMcD Consulting Inc., an adjunct professor at McMaster University and a PAPTAC Fellow who has worked in the pulp and paper industry for over 40 years.

This article originally appeared in the Fall 2019 edition of Pulp & Paper Canada.