When new owners restarted the paper mill in Port Hawkesbury, N.S., in October 2012, they recognized that the mill needed better economics in order to be competitive. One cost-improvement initiative was to work with Evonik Canada to decrease the cost of pulp brightening. 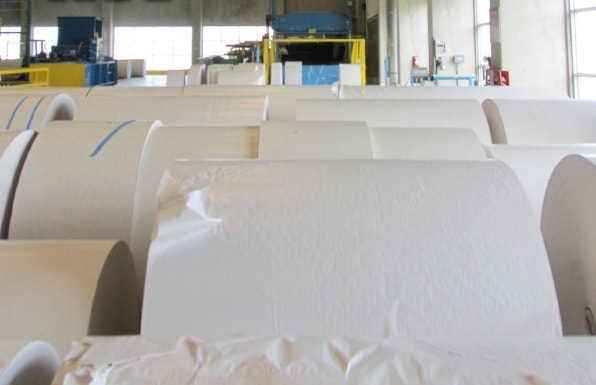 What could improve the bleaching process at Port Hawkesbury Paper without upsetting the other processes at the mill or paper qualities?

Bleaching became a target for cost reductions because it is “a huge cost to Port Hawkesbury Paper and [improvements] could be implemented at very low cost,” explains Les Urquhart, TMP day supervisor, Port Hawkesbury.

Evonik explored with the mill various alternatives for either decreasing cost or improving brightening efficiency.

Examine the possibilities
In a technical paper presented at PaperWeek Canada 2016, “Peroxide optimisation program: Port Hawkesbury Paper mill,” the authors describe the lab studies, mill trials and implementation of a solution which resulted in an average savings of about 3 kg of hydrogen peroxide per ADMT of thermomechanical pulp.

Evonik undertook a lab study to evaluate the conditions used in the H2O2 stage. Multiple factors were examined, including conditions, chemical dosages and additives.

So many options
The study examined the optimum dosages of NaOH and silicate, temperature, chelation treatment, MgSO4 addition, retention time and use of an additive. Although the lab work indicates that many aspects of the brightening process could be tweaked, they have to be considered in context of the complex, inter-related processes of the mill.

“The lab study provided several promising avenues to pursue, but it is a long step from the lab to the mill,” the authors state. “So there was careful consideration for which variations should be tried, considering other effects in the mill.”

For example: “It would be possible to decrease the dosage of NaOH, while maintaining the brightness. However, this would represent a minor savings and could negatively influence other pulp properties,” the authors say.

Another example: Increasing the silicate dosage had a positive effect on both brightness and residual H2O2, which demonstrates potential savings for H2O2, but there were concerns with other factors, the authors note.

The option considered to be most beneficial for Port Hawkesbury Paper was to move the addition point for the DTPA, instead of increasing the dosage. DTPA is normally added to the fibre line in advance of the cleaners and disc filters. In this case, it was felt that an addition point further downstream, closer to the bleach tower, might have some advantages.

From the lab to the mill
So a trial was undertaken in which DTPA was added at the MC#1 pump, immediately prior to the TMP unbleached tower. The advantages of this addition point are that the pulp consistency is higher, allowing for more effective chelation; there is less opportunity for the re-addition of metals; and there is an effective water removal step at the twin wire presses that will allow the removal of the chelated metals.

The effect of changing the DTPA addition point was immediate; the brightness and residual H2O2 both improved.

Based on the positive results of this trial, the mill has moved the addition point permanently. On-line and lab results have demonstrated an average savings of about 3 kg of hydrogen peroxide per tonne of TMP.

Other options for optimization are “not being followed up at this time,” says Dan Davies, Evonik. Davies explains that within the complex process reactions of a pulp mill, it is very difficult to change “just one thing.” There are generally unanticipated and unintended consequences.

Davies says Evonik will undertake an optimization project of this scale only every few years. The results generated by the lab work and mill trials will take years to investigate and implement at customer sites, he notes.

“We partner with our customers,” says Davies. “We want them to be the most efficient they possibly can be.”

The Port Hawkesbury optimization project took place over a span of about 12 months, Davies recalls. There were several months of data analysis and discussions with mill personnel, followed by a week of lab work, followed by 8-9 months of mill trials.

The change to the DTPA addition point was implemented permanently at the end of March 2014.

“We are constantly looking at trials, whether it’s chemicals or mechanical, working with our suppliers and our own team, being careful not to upset runnability but to actually improve and save costs at the same time in this challenging industry,” adds Les Urquhart.

This article was originally published in the March/April 2016 issue of Pulp & Paper Canada.