The Finnish research institute VTT has demonstrated that lignocellulosic biomass can be successfully converted into industrial biochemicals, in this case, pure BTX chemicals (benzene, toluene and xylene). The aim of this research, reports VTT,... 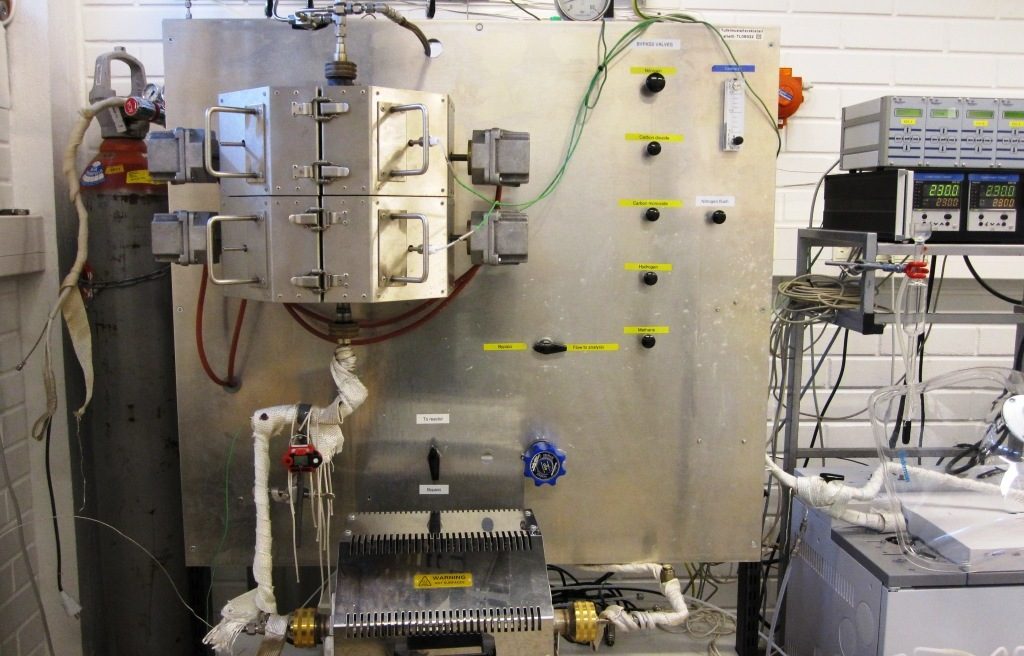 This is some of the equipment used in VTT's gasification/synthesis process to derive industrial chemicals from lignocellulosic biomass. Courtesy of VTT.

The Finnish research institute VTT has demonstrated that lignocellulosic biomass can be successfully converted into industrial biochemicals, in this case, pure BTX chemicals (benzene, toluene and xylene). The aim of this research, reports VTT, is to enable the use of wood-based chemicals to replace crude oil in, for example, plastics, fuels, medicine and paints.

Demand has grown rapidly for chemicals generated from renewable sources, and particularly sought-after chemicals include pure aromatics, such as the BTX chemicals benzene, toluene and xylene, according to VTT.

VTT has developed a method of manufacturing BTX chemicals by combining the gasification of lignocellulosic biomass, the Fischer-Tropsch synthesis and aromatisation. Over 85% of the separated benzene exceeded 90% purity and around 50% of the separated toluene was over 70% purity, the institute reports.

The process can be applied to the production of bio-based chemicals. However, both benzene and toluene can also be used in the manufacture of more sophisticated compounds, such as paracetamol (called acetaminophen in North America), a painkiller that VTT used as an example compound in its tests. Since the compound’s synthetic route requires pure source materials, VTT’s research proves the high quality of aromatics produced through gasification.

VTT has calculated that the estimated price of pure BTX fractions derived by gasification is EUR 1.40 per litre. This price is higher than the current price of raw material derived from crude oil, but significantly more competitive than the price of other bio-based routes.

VTT is continuing larger-scale development work in its Bioruukki piloting centre in Espoo, Finland. The aim is to demonstrate the industrial viability of the entire process – from biomass to aromatics to end products – by producing several kilos of material. VTT will further develop the synthetic route in order to improve the technical and economic feasibility of the process as a step towards commercial viability.