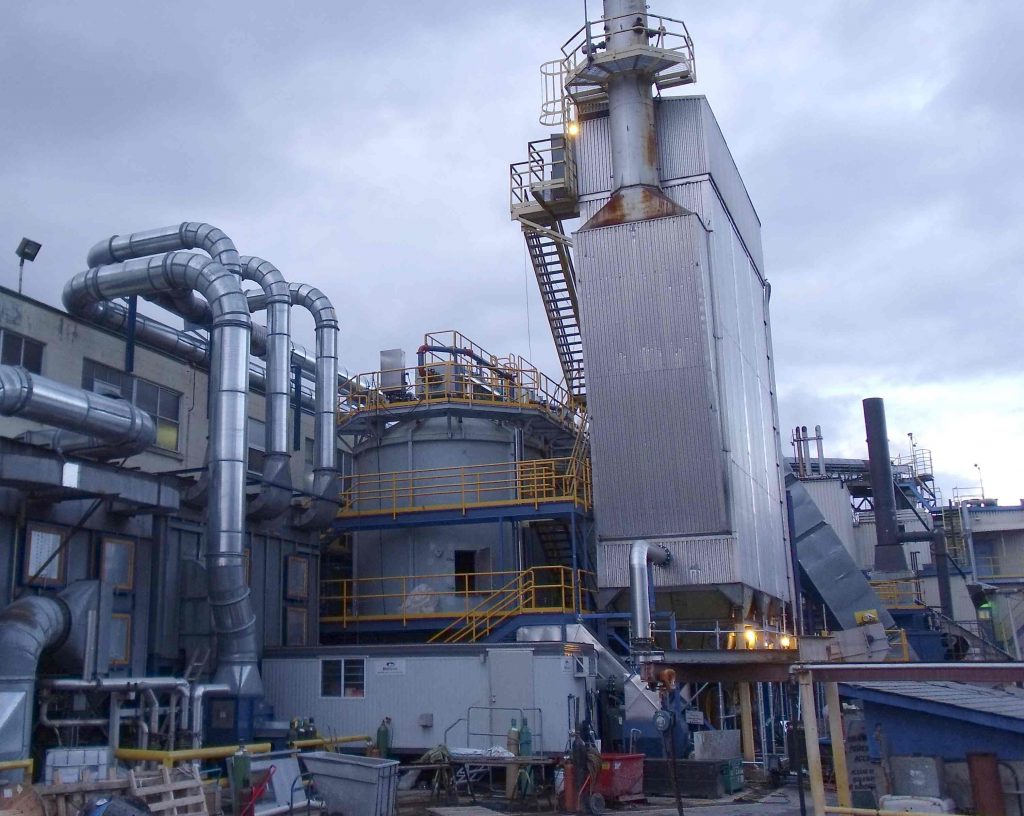 Kruger Products new gasifiers are located between the existing precipitator and the building.

Construction is finished, and operational trials of Kruger Products’ biomass gasification system have begun. The technology developed by Nexterra is expected to be a cleaner, cheaper method of firing steam boilers at pulp and paper facilities.

Individuals will have the opportunity to see for themselves how a biomass gasification system works in an industrial setting at the Kruger Products Limited tissue mill in New Westminster, B.C. The system in question was developed by Nexterra Energy Systems Corp. It started up in late 2009 and is expected to be ready for an open house in June 2010.

Kruger engineering manager Charles Leclerc anticipates significant benefits from the company’s investment in the new technology. For example, a reduction of provincial carbon emission taxes of $380,000 in 2010 alone, increasing annually to $580,000 by 2012. Greenhouse gas emissions will drop by 22,000 tonnes CO2 equivalent annually. Particulate emissions should be “virtually zero.”

The heat efficiency of the new system is expected to be double that of the mill’s old hog-fueled boiler, which was decommissioned in 2007 and replaced with a temporary natural gas boiler. Also, the Nexterra gasification system will cost $300,000 less per year to maintain and operate than the hog fuel boiler.

Compared to a natural gas boiler of equivalent capacity, the biomass gasification system will reduce fuel costs by well over $1 million a year.

Not bad for a major mill that needs every edge it can get to remain competitive in a volatile global economy and, equally important, meet the environmental expectations of its customers and its neighbours in the community.

“In an urban area, and in challenging economic times, we needed the cleanest and the most cost-competitive technology available,” says Frank van Biesen, Kruger Products’ vice-president, technology.

Biomass to syngas to steam: The direct-fired gasification system was developed by Nexterra Energy Systems, which has been making steady inroads into clean renewable energy systems for the wood products industry in recent years. The custom-designed installation for the Kruger project is described as the first of its kind to demonstrate the direct-firing of an industrial process boiler with a synthetic gas, or “syngas,” produced from gasification of wood residues.

Two gasifiers will convert biomass into clean-burning syngas, which is then transferred to an ignition chamber coupled directly to a watertube boiler. Capacity of the system will be 40,000 pounds/hour of medium pressure process steam, destined for a variety of uses on the site.

Kruger is part of a project consortium that includes national research organization FPInnovations and Nexterra Energy Systems Corp., with funding partners including Natural Resources Canada, Western Economic Development, and the province of British Columbia. The objective is to demonstrate commercial gasification technology at the mill scale, and for FPInnovations to conduct tests to verify and optimize performance.

“The intent of the government partners is to see if this is a system that could and should be adopted in other pulp and paper mills across Western Canada -potentially 10 of them,” says Jim Dangerfield, executive vice-president, FPInnovations.

“For us, this is part of our mandate -to develop and demonstrate technology that will help the industry reduce the cost of energy, which is a significant cost of production in the pulp and paper sector.”

“The project will allow us to gather real-world numbers on the economics of substituting biomass for fossil fuels and, more importantly, gather life-cycle carbon emission reduction data,” Dangerfield explains. “The Nexterra system selected for this project is a platform technology that can be used in numerous applications. Replicating this technology at some key industrial sites in British Columbia alone could reduce greenhouse gas emissions by 200,000 tonnes annually.”

In addition to the 2010 open house and tours, industry members will be able to assess the new system through an ongoing knowledge transfer program managed by FPInnovations.

To be notified of open house details, contact: stephanie.troughton@fpinnovations.ca.

Related
The paper office
PAPRICAN’S RESEARCH OPENS THE DOOR to opportunities and growth for its Member Companies and Industry Partners
To Build or not to Build
People (May 01, 2002)