As demand for pulp and paper continues to slide, mill operators and their investors might consider breathing new life into the industry by transforming mills into biorefineries that use a fuels-from-t... 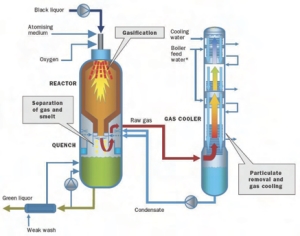 As demand for pulp and paper continues to slide, mill operators and their investors might consider breathing new life into the industry by transforming mills into biorefineries that use a fuels-from-the-forest black liquor gasification process.

“Mills that make this investment are strongly positioning themselves as more competitive by adding 30% to 50% of revenue from the production of renewable motor fuels, for which the market is growing steadily, while replacing or adding recovery capacity facilitating profitable pulp production,” explains Richard J. LeBlanc, CEO of Chemrec SE and its U. S. subsidiary, Chemrec USA, which owns a patented fuels-from-the-forest biorefinery technology.

A fuels-from-the-forest biorefinery, an investment that can reach well above US$200 million, consists of several components well-proven in petrochemical applications or long-term industrial-scale operations. The components of Chemrec’s system are: an oxygen plant, a black liquor gasifier and gas cooler/steam generator (illustration), a plant for removing carbon dioxide and hydrogen sulfide from the raw syngas that is produced, a fuel synthesis plant where liquid fuel is synthesized from the syngas, and a distillation plant where the fuel produced is purified to meet product specifications, i. e. methanol, dimethyl ether or other green fuel.

According to Chemrec, mills producing as little as 500 tons of black liquor solids per day are proving to be commercially viable as fuels-from-the-forest biorefineries using this method. At the minimum capacity size, such a biorefinery mill would produce upwards of 32 million litres a year of green motor fuels.

Adding biofuels capacity can also generate additional employment, primarily for the extraction of biomass from the forest and operation of the biofuels plant.