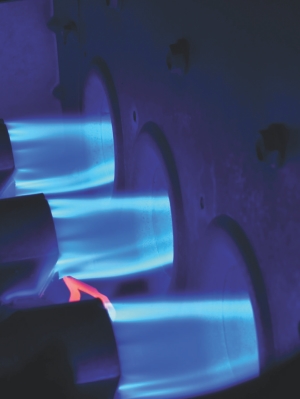 It’s a simple formula: A reduction of the amount of natural gas you burn plus an increase in the amount of biomass you burn equals a reduction in greenhouse gas emissions (GHG). Studies undertaken by FPInnovations researchers confirm a mill can slash its fuel costs by $1.25-$8 million per year, depending on the size of its boiler and the cost of natural gas or oil, simply by optimizing biomass combustion in its wood/natural gas fueled boiler.

This is exactly what AbitibiBowater in Thunder Bay did with a recent rebuild of a power boiler. The company enlisted the help of EKT General Contractors, Alstom Power Canada, Cook Engineering, and Automation Applications for the project.

When AbitibiBowater undertook to upgrade its No. 6 power boiler, three goals were set: to improve the boiler’s ability to burn biomass and process sludge; to increase MCR steam production on biomass; and to introduce the capability of swinging boiler steam production while on biomass only, in order to meet the demands of the mill’s 850 lb. steam header.

“The design-build team assessed the capability of the boiler furnace, combustion air and induced draft fans, fuel feed system and the ash system, with regards to the increased biomass firing to determine whether the performance criteria could be met and what would have to be modified to meet the performance targets,” explains Dave Knutson, president of Cook Engineering. Alstom Canada designed the mechanical modifications to the boiler and upgrade of the air system and fuel delivery, as well as the upgraded burner management system. Cook Engineering provided design for the new biomass delivery system, back-end dry ash systems, and integration of the boiler automation work.

The process involved a combination of both new and existing technologies. “To reduce cost and provide some redundancy, the existing conveyor and in-feed system were incorporated into the new system to minimize the impact on fuel firing during the construction period,” Knutson outlined. The biomass fuel feeders were custom-designed to provide control of fuel metering, which is critical to being able to control the mill’s process steam header pressure on the biomass fuel.

The power boiler was originally built as a fixed-bottom boiler and required daily ash raking, and the biomass handling and delivery system was not constructed to provide typical steam requirements on a continuous basis. The mill’s normal operational procedure was to burn bio-fuel with natural gas as the responsive auxiliary fuel, with a bio-fuel burning capability of roughly 240,000 lb. of steam per hour.

The furnace bottom was replaced with a modern, dry mechanical conveying design, while the bio-fuel delivery system was upgraded with an apron feeder, reclaim drag chain conveyor, a vibrating taper slot screen and hog. Tapered volume fuel metering screw feeders were also installed at the boiler, allowing for final element control of fuel feed to the boiler. Bio-fuel was transferred to the distribution conveyor, which supplies three of the four bins in consecutive order, and finally discharges into the last bin. Belt weightometers were installed on the No. 1 bark supply belt and on the sludge feed conveyor to determine the ratio of sludge to hog fuel in the fuel mixture feed to the boiler, and upgrades to the air system were made to ensure properly distributed air was supplied to the furnace and to the undergrate for proper combustion.

Conditioning the ash was a challenge

As Knutson notes, operational challenges are inherent to any capital improvement of this magnitude. However, several glitches particular to this project led the design team back to the drawing board on occasion.

“We needed to install piling and the foundation for the new grate underneath the boiler. This was difficult and only possible because of the style of grate originally installed,” Knutson says.

“The second issue was how to condition the dry ash. This is historically difficult to do on a consistent basis.” The project team borrowed technology from another industry to install a precise conditioning device that measured the weight of ash, added the correct proportion of water, and then mixed the material to create a consistency of damp earth. This quenched the ash and reduced dusting during handling, but required the design, fabrication, and installation of a custom metering bin.

Several objectives were achieved with this project. Most notably, the mill minimized fossil fuel purchases and associated costs by displacing it with wood fuel -a material that has a much lower GHG emission rate. Upon completion of the project, the boiler was able to meet its steam demand on biomass alone. Savings from this ability, resulting from the reduction in natural gas consumption, paid for the capital costs of the project in one year. Further, in the first year of operation, CO2 emissions were reduced by close to 20%.

Federal funding programs such as the Short Term Competitiveness program, and the Pulp and Paper Green Transformation Program are helping to make capital improvement projects with an environmental edge a worthwhile undertaking for many Canadian operations. As Vic Uloth, principal research engineer and leader of boiler optimization and emissions control for FPInnovations, points out, many mills could easily benefit from having their power boiler operations similarly evaluated.

“FPInnovations member company mills can get this done for free under the Short Term Competitiveness program funded by NRCan,” he says. Uloth’s estimate, based on the research institute’s experience of looking at more than 40 power boilers, is that only one third of them run well.

“You can get minor increases in the thermal efficiency and hog steaming rates but these boilers are generally operating close to their limits. Another third runs poorly due to control problems, poor hog distribution on the boiler grate, or poor combustion air distribution. You can get significant increases in boiler steam production, with little or no capital expenditure, by identifying these operating problems and remedying them.”

The final third run poorly due to design problems, Uloth confirms. “Significant capital expenditures are required to upgrade their air, hog delivery systems, or emission control systems. While the upgrade on the power boiler at the Thunder Bay mill included significant capital expenditures for rebuilding the lower furnace, the combustion air system, the hog feed system, and the ash handling system, the payback was less than one year due to the very significant increases in biomass-generated steam.”

As Knutson of Cook Engineering highlights, any mill currently firing biomass fuels conventionally (on a grate-fired unit with a combustion air system using technology from the 1970s or earlier) is likely considering an upgrade similar to that in Thunder Bay. “Many mills may have some components in place already so that each location would have to assess their needs on a case-by-case basis. If a mill has the potential for biomass-fired power generation and available wood fuel, these modifications would allow for increased green power generation.”

Related
Smithsonian scientists compare environmental impacts of biofuels
BRIEFLY (May 01, 2001)
ARE YOU FED UP WITH THE Y2K BUG?
CEO SERIES: Meeting the Leaders