Tips on optimization and cost control from PaperWeek Canada

May 13, 2019 – Bleaching of chemical pulps has evolved a lot over the last few decades.

As well as the evolution of chlorine dioxide bleaching, steps such as chelation, oxygen delignification, ozone, and addition of oxygen and/or hydrogen peroxide to the extraction stage have been added to the portfolio of bleaching technologies available – and bleaching can be done in three to six stages.

This means there are a lot of variables to keep track of in the overall bleaching process. Good operating practice requires a good understanding of the fundamental reactions occurring, as well as sensors and control loops to make effective control possible.

Improving bleaching performance
Mona Henderson, who works for Valmet as a business manager, talked about the challenges of running sub-optimized bleach plants with many constraints, old and overloaded equipment, or insufficient data on process parameters. She laid out a general approach to troubleshooting and optimization.

The first step is to map the existing operation, including cooking, washing and any oxygen delignification. The second step is to define the problems, including equipment problems, process limitations, high chemical dosages, missing or broken analyzers, and variations in production rate or unbleached pulp quality. The key to a successful solution is to identify and address the root cause and not just the symptoms. She demonstrated this approach using three case studies, showing how problems often begin upstream. She emphasized how important it is to understand the fundamental chemistry of the process in order to develop effective solutions.

Guy Normandeau, process solutions manager at Capstone Technology, presented a paper on behalf of his Swedish colleagues at sister corporation BTG and Karlstad University on the impact of dissolved organic matter in an EP stage. Carryover of dissolved organic matter from one bleaching stage to the next has a significant impact, and in this case the authors looked specifically at the effect on the EP stage. Carryover of dissolved lignin from a chlorine dioxide stage has a significant negative impact on the following EP stage, resulting in less delignification and less brightening of the pulp. The results indicated that this dissolved lignin can result in too low a pH for effective EP bleaching. While this can be compensated for by a higher sodium hydroxide charge in the EP stage, it is not as effective as having a well-washed pulp.

Scott Carmichael of Nouryon Pulp and Performance Chemicals presented another approach to improving bleaching performance, using a scorecard to evaluate overall efficiency and then identify areas for improvement. Industry benchmarks are derived from three sources: Nouryon’s database, lab studies and a bleach plant model. The database was first developed in 1996 and contains data from approximately 75 per cent of all North American bleach lines, classified by species, the presence of oxygen delignification and the number of stages. The majority of the data are from actual mill studies.

The scorecard provides values for comparison so that problem areas can be identified and improved. Some commonly occurring bleach plant problems are off-target D-stage pH values, non-optimized chlorine dioxide split between D stages, and feedstock variability.

A reliable measure of bleach plant performance is the oxidative equivalent Kappa factor (OKF), calculated by formula shown in Figure 1.

Figure 2 shows an example of OKF values for a three-stage softwood bleach plant. The OKF value of a client mill was 0.65, which is in the top 20 percentile for three-stage softwood bleach plants. Although this value could be affected by a higher brightness target, it could also indicate problems such as high brown stock carryover (>10 kg/t of COD) or high feedstock variability.

The OKF is just one factor that Nouryon uses to evaluate bleach plant performance. Others include the E-stage caustic to active chlorine ratio (a high ratio indicates problems), the per cent delignification from brown stock to the first E stage, and the D1 multiple, defined as %ClO2 divided by the extraction stage Kappa number.

A common problem is that too much of the total ClO2 is applied to the D0-stage. Depending on the number of stages, the optimum distribution of chlorine dioxide is somewhere between 50-65 per cent in the D0, and the rest in the latter stages. When the distribution of chlorine dioxide is loaded too heavily in the front end, chemical is wasted. Carmichael concluded that when these factors deviate from the normal process range, individual stage parameters should be explored to determine the root cause. 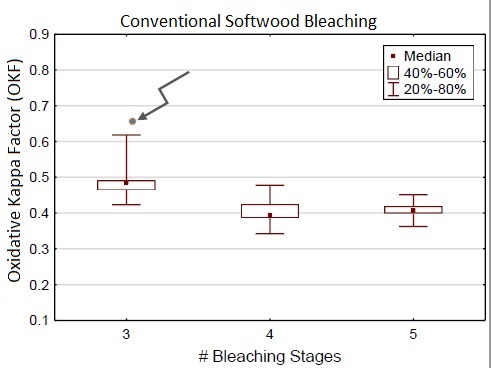 Reducing bleaching costs
Researcher Xuejun Zou gave a presentation on various strategies for reducing the cost of bleaching developed by FPInnovations. A specific approach that applies to chlorine dioxide use is Near-Neutral Brightening, which has been patented and implemented in several mills. This technology focuses on controlling the pH of a D stage to a pH near seven. This can reduce ClO2 demand as well as prevent brightness reversion of the final pulp.

FPInnovations’ general approach to bleach plant optimization is based on understanding the underlying behaviour of a mill’s specific pulp furnish and bleaching sequence. By running a series of lab experiments, they discover the sweet spots for optimum bleaching performance, based on chemical dosage, pH and/or caustic charge, temperature and retention time. They can then recommend implementation of a mill-specific optimization strategy and control for each stage of bleaching.

The Irving Pulp and Paper mill in Saint John, New Brunswick, chose to implement a model predictive control (MPC) strategy to keep its bleaching costs in line. John Gillespie, bleach plant superintendent at the mill, gave a presentation on the project, done in partnership with Capstone and BTG.

The mill has a DEDED bleach sequence (Figure 3), and several sensors are located at critical positions in the bleach plant, including BLT-5500 (bleach load transmitters) and pH and brightness sensors. The BLT measures the lignin (or Kappa) content of both the fibre and filtrate by use of an optical measurement technique. MPC is an advanced control technique used in many processes, which involves building a model of the entire process based on signals from the sensors, “bump” tests in the process to measure the response of the system to changes in each variable, and set points such as final brightness and pH. The model is then used to deliver the desired results by constantly manipulating the variables in order to meet the set points.

The key advantage of a model-based control system is that brightness variability can be reduced significantly when compared to a manually controlled system, enabling bleach chemical savings. The mill experienced a few challenges in implementing the MPC system. Changes in production rate alter bleach tower retention times and can skew the model. Sensor fouling can lead to false readings that result in incorrect chemical dosages, but the team was able to develop a strategy to deal with this, which included building a “soft sensor,” or model-predicted brightness value, to indicate when fouling was occurring. When a sensor value differs significantly from the predicted value, the sensor can be taken offline and cleaned (Figure 4). 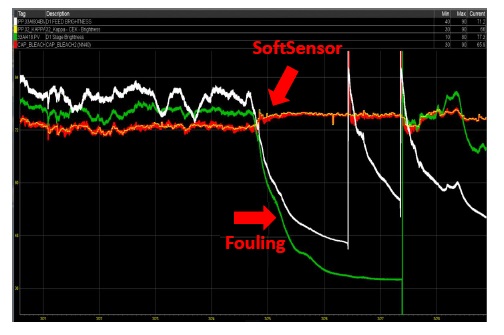 Figure 4: Signals from two brightness sensors (white and green) and soft sensors (red and yellow) during a fouling event

The final challenge was the training of operators to understand and work with the new control concept. There was a classroom component as well as coaching by Capstone on how to deal with deviations and events as they occurred.

The results speak for themselves. Over a nine-month period under MPC control, Irving achieved an average reduction of 20 per cent in total ClO2 and 26 per cent in total NaOH usage for hardwood pulp, and eight per cent and 19 per cent, respectively, for softwood pulp.

All the presenters agreed that while pulp bleach plants are complex systems, they can be kept running efficiently if enough measurements are in place to develop an understanding of the root cause of process upsets, backed up by a good fundamental understanding of the chemistry involved and an active optimization process.

Martin Fairbank has worked in the pulp and paper industry for over 30 years and is currently a consultant and technical writer.

This article originally appeared in the Spring 2019 issue of Pulp & Paper Canada.