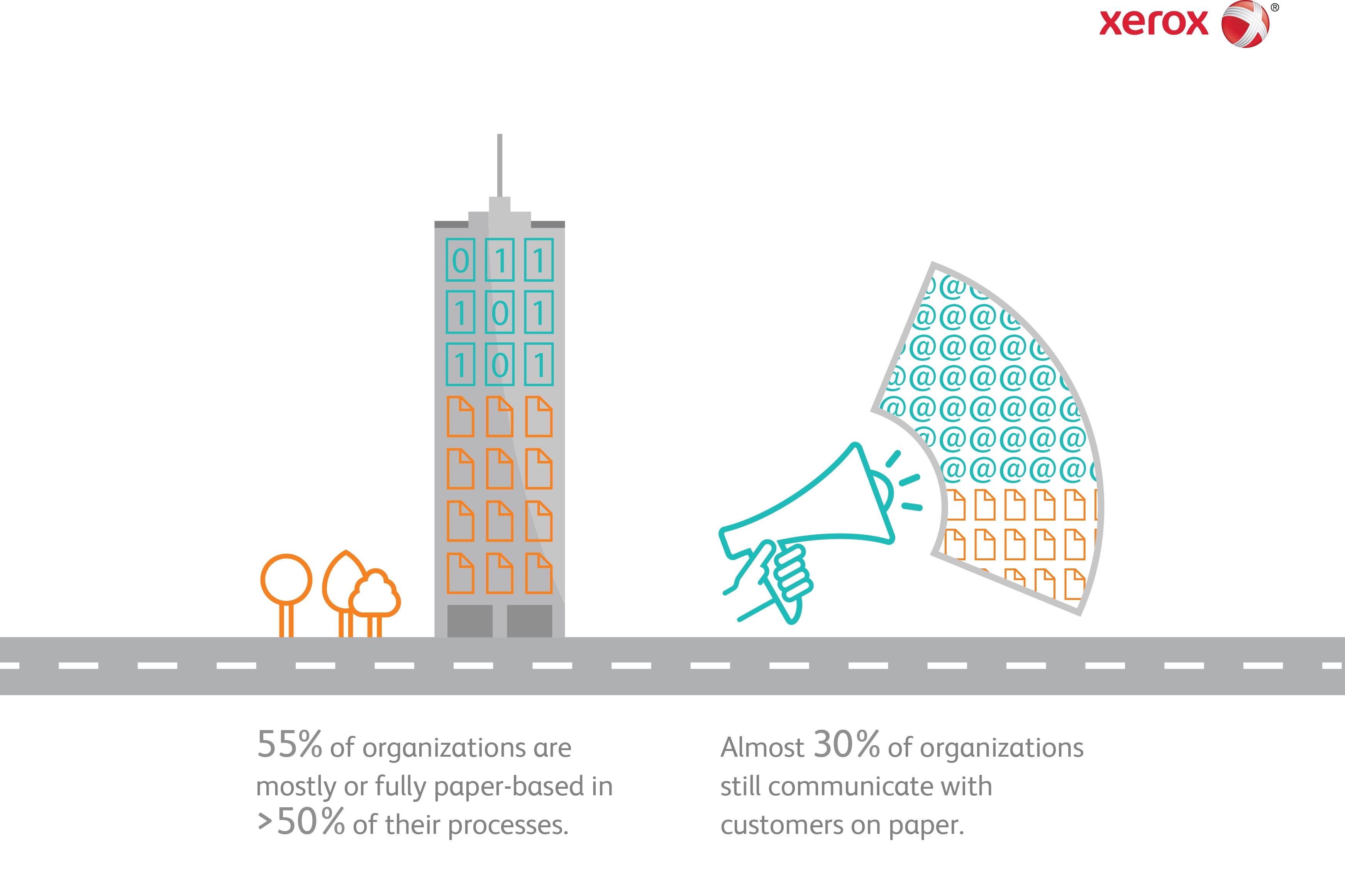 Data is the lifeblood of business today, and it’s not easy digging through it to uncover insightful, actionable intelligence. That’s one takeaway from a survey of 600 IT decision-makers in large U.S., Canadian and Western European organizations. The “Digitization at Work” report from Xerox shows the move from paper to digital processes is nearly upon us, however, many survey respondents admit they may not be ready for it.

The report found broad concern over paper-based processes, with cost (42 per cent) and security (42 per cent) cited as primary issues. Forty per cent of Canadian respondents said cost reduction was the prime reason for digitization followed by improved data collection at 33 per cent. Survey respondents predicted an average of only nine per cent of key business operation processes will run on paper in the next two years.

But more than half (55 per cent) of the respondents admit their organizations’ processes are still largely or entirely paper-based, and about one third (29 per cent) are still communicating with end customers via paper, rather than email or social channels.

“Organizations foresee a lean and agile digital future, but current business processes are still weighed down by paper,” said Andy Jones, vice-president, workflow automation, large enterprise operations, Xerox. “The disconnect between an organization’s vision and the steps required to achieve successful digital transformation has stalled the promise of digitization.”

The survey also found that 41 per cent of respondents agree that moving to digital workflows will cut organizational costs, and 87 per cent appear to have the skill sets available to make this happen.

The survey showed that Canadian companies are generally ahead of their global counterparts in digitizing processes in the areas of invoicing, contracts, customer engagement, HR on-boarding, new product development, and vertical and operational processes. Forty-four per cent of Canadian respondents said they will have all seven digitized in two years – the highest across all countries surveyed.

In many cases, digitizing or re-engineering paper-based processes before they are automated will lead to better results. Analyzing employee print habits, for example, provides an insight into hidden opportunities for digitization where paper use is high. The report found that 90 per cent of respondents said they have good tools to analyze employee print habits, but only half of them (45 per cent) are using those tools to their full extent. Comparatively, 86 per cent of the Canadian executives surveyed said they have these analysis tools but one third do not use them fully.

The key reasons Canadian executives said they are still printing documents was for hard copy reference (69 per cent), signatures (65 per cent) and sharing (48 per cent).

When it comes to automating processes, almost three quarters of respondents said they already have identified areas for automation. More specifically, they cite accounting (38 per cent), expense reporting (37 per cent), accounts payable (36 per cent) and customer care (35 per cent) as the most likely functions to become fully automated within the enterprise.

For the Digitization at Work study, Coleman Parkes Research surveyed 600 IT decision-makers and influencers from organizations in the United States and Canada, as well as Western Europe (Benelux, France, Germany, UK). This research activity was designed to understand their attitudes, challenges and initiatives in relations to digital transformation and paper-intensive processes.

The full Xerox report on the study can be downloaded here.