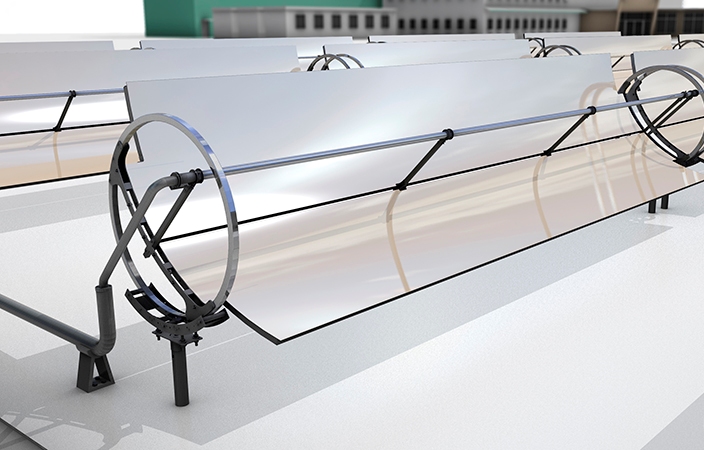 The solar heat facility provided by Rackham will heat pressurized water for use in the Cascades Kingsey Falls complex. Photo courtesy of Rackam.

The solar heat facility that Cascades began building in June was inaugurated on Oct. 20 by Pierre Arcand, Quebec’s Minister of Energy and Natural Resources and Minister responsible for the Northern Plan; Mario Plourde, president and…

The solar heat facility that Cascades began building in June was inaugurated on Oct. 20 by Pierre Arcand, Quebec’s Minister of Energy and Natural Resources and Minister responsible for the Northern Plan; Mario Plourde, president and CEO of Cascades; and Mathieu Chagnon, president of Rackam. The Alain-Lemaire Solar Park will supply more than 1 MWh per year of energy to Cascades’ units in Kingsey Falls, Que.

Cascades and Rackam started work on the ground-level facility in June, installing a powerful concentrated solar power (CSP) system with a surface area of 1490 m2 on a 4000 m2 lot, with the aim of reducing the consumption of natural gas used to produce the hot water required for operations at the industrial complex. The project is a first in the pulp and paper industry.

Financing for the $1-million project came in part from a $463,500 grant from the Ministère de l’Énergie et des Ressources naturelles du Québec. The funding came from the former Energy Innovation Assistance Program (PAIE), now part of the Technoclimat Program. Gaz Métro was also involved in the project, contributing $76,000 through its Innovation Program.

“With the commissioning of the Alain-Lemaire Solar Park, Cascades is once again at the forefront of sustainable development, reaffirming its position as a leader in energy efficiency,” said Mario Plourde. “This project, built on the values instilled in the company by the Lemaire brothers for half a century, will also encourage the new generation of entrepreneurs and the continued development of green technologies.”

“The solar park in Kingsey Falls is the only facility of its kind in Canada, which is proof of Cascades’ leadership and innovative spirit,” said Mathieu Chagnon.

This reduction in the consumption of natural gas will also allow Cascades plants to reduce greenhouse gas (GHG) emissions by more than 265 equivalent tonnes of CO2 per year.