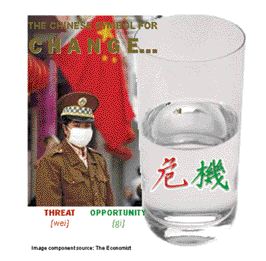 The SARS issue represents a trend break, or disruptive event, that not only affects business prospects but also exposes some of the lurking weaknesses in the “Chinese System.”The most recent fear is t…

The SARS issue represents a trend break, or disruptive event, that not only affects business prospects but also exposes some of the lurking weaknesses in the “Chinese System.”

The most recent fear is the spread of the virus through the rural popula- tion where medical services are poorly equipped to cope with an epidemic. Of particular concern is China’s large “floating population” of migrant workers. A psychological arrow has pierced business confidence over Asia and many projects are on hold.

The crisis may be short-lived, but it may also be the sign of a new braking parameter in China’s economic growth and influence. The issue is as much about the SARS event itself as it is about the secretive way the authorities have handled this crisis.

The high-growth Chinese economy has held great promise and excitement for Western business. However the “half-glass full” view should not blind us to some fundamentals that remain a weakness — at least in the medium term. There is a big shift change underway, but there are also some critical areas of uncertainty such as banking reforms, intellectual property rights, open business climate, centralized control, human rights, and others. The recent SARS crisis was unexpected and has exposed a worrying confidence problem. The economic fallout is resulting in a growth-rate downgrade from 8% to 6.5% for 2003. This represents a huge internal social problem since economic growth is needed to maintain employment growth for 150 million migrants from China’s rural areas. Compounding this situation is the severe restriction on migration because of SARS. Epidemics of this kind have frequently originated in China, but this now becomes a more serious problem with the simultaneous conditions of a very poor, densely populated and now globally connected country. If the authorities are unable to come to grips with SARS and its possible mutations, the glass may begin to look half empty.

Perhaps the greater issue is what we learn from the Chinese authorities’ handling of the crisis. The uncertainty created by failure to disclose politically sensitive information is as troubling for the business community as the fear and fallout from the disease itself. Will the secretive bureaucracy inhibit disclosure on other politically sensitive issues that are sure to emerge during China’s change journey?

There are perhaps two possibilities for the future: China’s legendary mobilization ability to meet a crisis could lead to a new era of health awareness, coupled with an understanding of what is required of a responsible member of the international community [glass half full], or the system will be unable to contain the situation and political nepotism will prevail [glass half empty]. A short list of driving factors to watch might be: investment in health care, internal migration levels, rural area growth, equity markets regulation, banking reforms, bankruptcy laws, military system spending, and any Chinese glasnost and perestroika signals. The news that Japan’s economy remains flat will bring no comfort to the hard-pressed economies of the wider south-east Asian region. The once-dynamic tigers are now struggling with SARS, terrorism and the global slowdown. Leadership from China is critical.

There is a growing reliance on China as an important Asian leader for driving the global economy over the next 20 years (Asia’s “billion boomers” effect), and for some much needed life-injection into the faltering forest products sector. A world of higher prosperity and contribution would seem to be assured — at some point in the future. However, the road traveled will present many pitfalls and surprises as the change process proceeds. With such multifaceted uncertainties impacting on this critical issue, the scenario approach to business planning would make sense. Scenarios for the China transformation process must consider everything from social, economic, government and trade issues to demographics, technology, environment and market issues. Other uncertain hot buttons to ponder: dissidents, human rights, HIV/AIDS, Three Gorges dam scenario, birth control and gender imbalance, forestry practices, Taiwan, North Korea, and now the SARS experience. Is this to be a hiccough along a business as usual landscape, a lingering predicament for business confidence, or a wake-up call for more urgent change?

Alan R. Procter is an international consultant helping organizations exploit the future in their business strategies. He can be reached through contact@alanprocter.com and his website at www.alanprocter.com#text2#