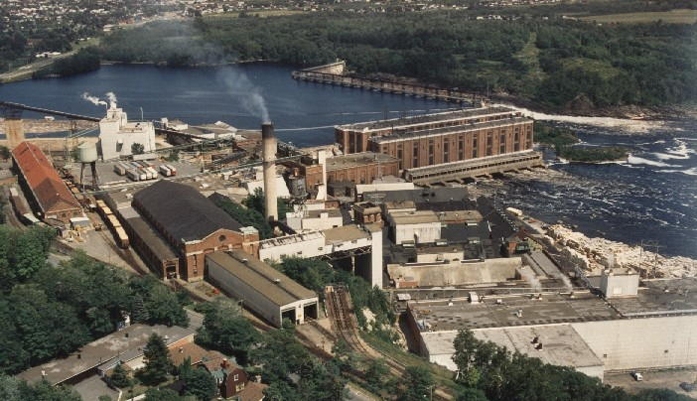 The Laurentide paper mill in Shawinigan was closed in 2014.

The town of Shawinigan, Que., is taking possession of Resolute Forest Products’ closed Laurentide paper mill to prepare the site for its new tenant, Nemaska Lithium.

The company and the town of Shawinigan have agreed on a transaction that allows the town to acquire the site, the buildings and the Harmony landfill, once Resolute finishes remediation work on the site. The town will then enter into an agreement with Nemaska Lithium to give it ownership over part of the land and infrastructure.
The Laurentide mill was closed in October of 2014, after having been in operation for more than 126 years. It had an annual production capacity of 191,000 tonnes of commercial printing papers.
Nemaska intends to build a demonstration plant, and then later construct a commercial plant that will convert the mineral it mines at the Whabouchi property, near James Bay, into high purity lithium hydroxide and lithium carbonate.
Lithium is used to makes batteries for rechargeable electronic devices and portable tools as well as electric car.
Nemaska Lithium had originally planned to build its Phase 1 plant and Hydromet plant in Salaberry-de-Valleyfield, Que. The company says the decision to instead build these plants in Shawinigan was made based on several key factors including:
– reduced construction time because of the high quality and state of the existing buildings, significantly reducing capital costs;
– existing and ready-to-use infrastructure required for the operation, including natural gas, electric power station and railway; and
– the fact that Shawinigan is closer to the Whabouchi mine site, thereby reducing concentrate transportation costs.