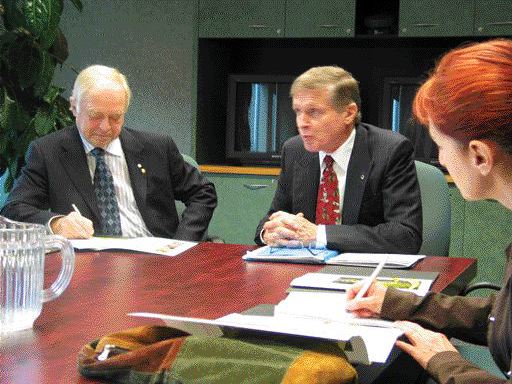 Domtar’s president and CEO Raymond Royer is the first official recipient of the newly created FSC Winds of Change Award.

The Forest Stewardship Council established the honour to recognize exceptional contributions made to the safeguarding of the future of forests, and all the players who will subsequently rely on them.

At a press conference held in Montreal at the end of September, FSC president and CEO Antony Marcil noted that as participation in the FSC’s certification process is entirely voluntary, “it’s something special that people elect to do this.”

Domtar, under Royer’s direction, sought to have all of its forest management and forestry operations certified by a third party in accordance with FSC Canada’s exacting Forest Management Standards. To date, three million hectares of Domtar-managed private and public land in Ontario and Quebec has been certified. The company plans to have an additional 3.1 million hectares certified by the end of 2007.

“This is an investment that allowed us to be very transparent, Royer said. “This will help to protect the durability and the biodiversity of our forests for a long time to come.”

Marcil additionally pointed out that the stipulations of the award do not imply that a company has to be on the receiving end of the honour. “But, we decided they set an example no one else did. It’s true that we need to cut our forests. The paperless office isn’t something that will happen. Our paper consumption is increasing, and so, this needs to be done properly, and we are working to make our forests healthy. Mr. Royer and Domtar decided to jump in and do this; they were the first. No one else has done what Domtar has done.”

letter to the editor