News
Don’t Be A Target 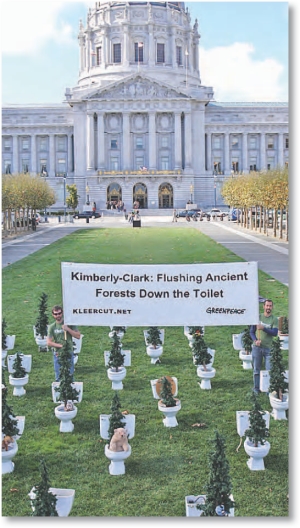 Flushing ancient forests down the toilet was the theme of a Greenpeace campaign that targeted Kimberly-Clark. K-C has since revamped its procurement policy to specify fibre from Boreal forests should be FSC-certified

Jim Lopez, president and CEO of Tembec, nicely quantified the benefits of forest stewardship certification at the company’s annual meeting in January. Tembec began pursuing certification almost a decade ago, and all of the forest that it manages is certified to a Forest Stewardship Council standard.

“We are the company with the largest certified forest base in the world,” Lopez said. That certification, for Tembec’s pulp business, “has opened up doors to preferred accounts and preferred markets.

“In lumber, it has allowed supply contracts with big box stores. We have a great position with both Home Depot and Lowe’s, and a lot of that is attributable to our FSC position.”

And there is a quantifiable bottom-line benefit as well, he stated. “It has also provided improved margins. We estimate that those improved margins amount to about $10 million per year, mainly in pricing because of the premiums we can obtain.”

Other benefits of certification, such as good PR, are not so measurable. Lopez continued: “And of course, the big intangible benefit that’s hard to quantify -but there is a very real value to it -is that we’ve avoided the highly publicized attacks by environmental organizations that we’ve seen against some of our competitors.”

Forest certification in Canada has seen rapid growth in the last 10 years, and has brought the country to a leadership position in this sector. According to Paul Wooding of Canfor Pulp, 45% of the global total of certified forest is in Canada.

Sstatistics from PEFC (Programme for the Endorsement of Forest Certification schemes), reveal that Canada has 74.8 million ha certified to the CSA sustainable forest management standard, and 47.9 million certified to the Sustainable Forestry Initiative (SFI) standard. Other nations leading the PEFC chart are the United States with 33.8 million ha and Finland at 20.8 million ha. FSC claims 39.4 million ha of certified area in North America.

Contrary to the situation Lopez describes for Tembec with its business clients, Wooding cited studies that show consumers are not willing to pay a price premium for stewardship-certified goods. In a study undertaken by Oregon State University, eco-labelled products outsold non-eco-labelled by a margin of two-to-one, as long as the price of both products was the same. A $0.50 price premium on the eco-labelled product almost reversed the ratio.

Wooding’s conclusion is that certification will be the price of entry to key markets.

Comparing the three most widely-used certification organizations, Wooding noted that the CSA standard is the most widely used in Canada. It was developed with the input of forest industry associations, and has a strong commitment to involve public opinion.

The SFI standard, he said, has been more successful in Canada than in U.S. markets. FSC is a strong player in global markets, and is supported by major environmental groups.

Also speaking at PacWest, Lyn Brown, vice-president, corporate relations at Catalyst Paper, explained that her company has turned to logos to make consumers aware of the ecological benefits of its products.

Catalyst uses a Paper Facts label, similar to a nutrition label, and notes the percentage of renewable energy used in the manufacturing process, because, she said, it is a quantifiable claim that can be proven scientifically.

“Is that enough? No. It plays out against headlines of conflict and criticism,” she commented. “Consumers want a “feel good” purchase. Urban people have an emotional connection to trees.”

Catalyst Paper recently obtained chain-of-custody certification from PEFC for its four Canadian paper mills. The certification replaces the PricewaterhouseCoopers chain of custody which the company implemented in 2004. Unlike the previous system, PEFC enables Catalyst to label select paper products as originating from forests managed to specific certification standards. In turn, customers are able to give their support for certification greater visibility with on-product use of a PEFC label or an SFI logo.

“Catalyst has a well-established environmental management system at all our mills,” says Richard Garneau, president and CEO, “and this extends to our preference for certified fibre. Converting our B.C. mills to PEFC -a widely recognized chain of custody -lets customers know our fibre sourcing, tracking, and verification also measure up to high standards.”

Catalyst will allocate and track available fibre supplies using the credit system so as to ensure that select paper products contain 100% certified fibre.

Pressure through the supply chain

While appealing to eco-conscious consumers and staying off the evening news are two primary motivators for pursuing forest stewardship certification, another driving force can be compliance with clients’ purchasing policies.

Patrick Armstrong, president, Moresby Consulting, notes that customers may specify certification as a way to mitigate risk, respond to or avoid conflict and controversy, protect their brand, and boost employee morale.

For example, when Home Depot was under attack by Greenpeace in the late 90s, Armstrong recalls, store employees were on the receiving end of protests, so the company moved quickly to develop a forest products procurement policy.

Consumer confidence is sometimes a motivator, as are relations with regulators and corporate social responsibility.

“I think it does give you a competitive advantage,” he concludes.

“This updated standard is a result of nearly three years of effort by a technical committee made up of forestry academics and researchers, forest companies, environmental groups, consumers, labour unions, Aboriginal people, and government regulators,” says John Dunford, chairman of the Forest User Group representing the CSA certified forest companies in Canada. “The additional requirements will further validate our commitment to sustainable forest management.”

The CSA standard is internationally recognized for delivering on a full suite of sustainability criteria including:

• Contributions to carbon uptake and storage; and

• Recognition of and respect for Aboriginal rights and title.

Trouble on the horizon

With certification well established in Canada, Tembec’s Lopez counsels pulp and paper companies to be wary of public sentiment on the greenhouse gas (GHG) issue. “We believe this subject is going to be very, very topical, not just in Canada, but in North America. Indeed, it’s already very topical in Europe.”

Lopez told participants at the Tembec annual meeting that his company has benefited from its efforts to reduce its greenhouse gas emissions. The company decreased its GHG emissions by 35% over the last three years, and can show a steady decline in the cost per tonne attributed to fossil fuels and electricity over that period, at a time when energy cost
s were rising quite sharply.

Catalyst Paper’s Lyn Brown also identified some emerging issues that should be on the radar of forest products companies: water availability and management, social justice, transparency, waste management, and toxics.

Keeping ahead of environmental issues could open doors for proactive companies, and keep protestors off the case.