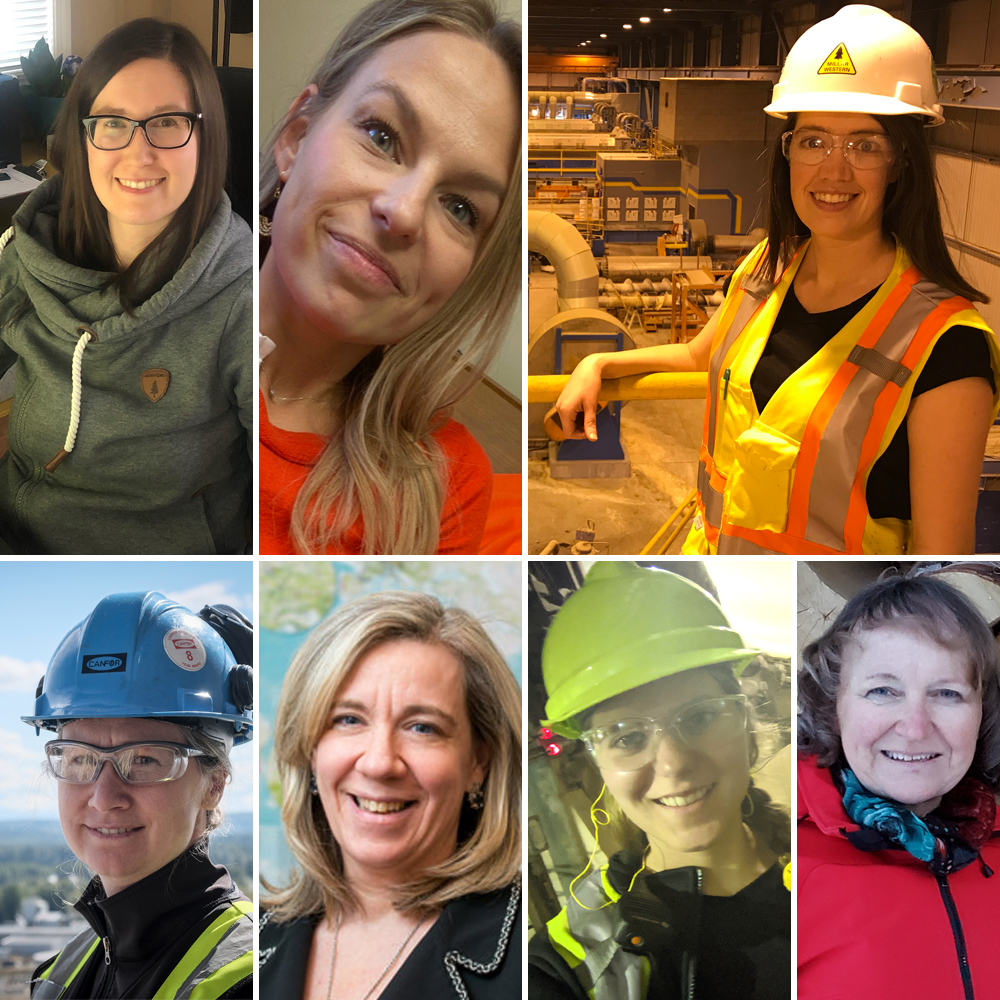 Change is happening in the forest products sector. The global events of this past year in particular – the toll of COVID-19, the pandemic’s impact on physical and mental health, and the momentum of the Black Lives Matter movement among them – have led to difficult and necessary workplace conversations across all industries, including this one.

From a gender diversity standpoint, it’s been amazing to watch the transformation in forestry. In 2016, Statistics Canada reported that women comprised 17 per cent of the forestry workforce. In an effort to increase the visibility of these roles, Canadian Forest Industries, Pulp & Paper Canada and Canadian Biomass have been regularly sharing stories on the sector’s efforts to recruit, retain and advance women.

Over the past three years, we’ve also teamed up to profile women working in pulp and paper, logging, wood products and biomass for Women in Forestry – a weeklong celebration commemorating International Women’s Day on Mar. 8, as well as Women’s History Month.

During this short time, we’ve seen the development of a government- and industry-led national plan for gender equity, which has since implemented several sector-wide initiatives, such as detailed data collection on demographics and the creation of an online hub for gender equity resources.

We’ve witnessed the tireless work of organizations such as the Forest Products Association of Canada (FPAC) with its #TakeYourPlace campaign highlighting women in the industry, the Alberta Forest Products Association with its own #WomenInForestry project recognizing women working in that province, and the Sustainable Forestry Initiative with its Project Learning Tree Canada program that encourages youth to join the sector.

We’ve reported on industry leaders such as Cascades and Kruger Products earning parity certification from the Women in Governance organization for their workplace policies that support career growth for women. We’ve watched the conversations expand to show how men play a role in women’s success, and how hiring more women in forestry makes good business sense. We’ve seen the community rallying in large numbers to discuss these topics at industry conferences – including our upcoming Women in Forestry Virtual Summit on Mar. 9, which is approaching 600 attendees as of Mar. 1.

Knowing how far forestry has come, even just in the past few years, gives us cause to celebrate. But we must acknowledge there is still a lot of work to do concerning diversity, equity and inclusion. The fact remains that women are underrepresented in the industry, as are marginalized groups such as Indigenous people (comprising seven per cent of the total workforce, inclusive of women) and Black people (comprising five per cent, inclusive of women).

Aside from the need for better representation, why should this matter to business leaders? Diversity of thinking in an organization increases innovation by about 20 per cent, according to the 2018 Deloitte report The Diversity and Inclusion Revolution.

The report notes that a diverse organization with an inclusive culture is six times more likely to be innovative and eight times more likely to result in better business outcomes. In an industry like forestry that’s been hit with a labour shortage as well as declining revenues in certain segments, product innovation and market expansion are critical. Diversity of thinking is necessary for survival.

Knowing how far forestry has come, even just in the past few years, gives us cause to celebrate. But we must acknowledge there is still a lot of work to do concerning diversity, equity and inclusion.

One of the people I interviewed this year for Women in Forestry was Jenna Strachan, Indigenous relations superintendent at Mercer International’s Peace River mill. She had some wise words to share from a former mentor – that “intention is irrelevant.”

“I didn’t understand completely what he meant at the time,” she says. “But I think about it often and understand now that although good intentions are a great start, what matters the most is the impact.”

So having good intentions to promote diversity of thinking and to recruit more people from underrepresented groups is different than developing and maintaining the supports needed to retain and advance those hires.

Increasingly, leaders are recognizing that the recruitment practices of the past might not cut it anymore. Workplace policies established at a certain point in time may have been designed for a certain group of people, and, as the workforce is changing, no longer necessarily apply across the board.

Throughout this year’s profile series, I asked women about the challenges they’ve faced in the industry because of their gender. Several said they hadn’t experienced any, zeroing in on the lack of sexism in their workplaces. Overtly sexist incidents are certainly less frequent in 2021, which is why forestry’s gender equity leaders are looking far beyond them.

Now, leaders are aiming for gender equity and inclusion as they assess the structures that prevent women from advancing in their careers at the same rate as men – or that discourage them from entering the industry in the first place – to find solutions that will accommodate everyone.

Pamela Cowan, TAPPI’s Women in Industry Division chair emeritus, agrees that the conversations have been changing to focus on the “subtle barriers.” She spoke to me for an upcoming episode of Pulp & Paper Canada: The Podcast, airing Mar. 5. “We’re at the stage where we have to really dig deep to understand,” she says. “It has a lot to do with cultural bias.”

“The work/life balance thing is an extremely difficult thing for women in the industry [if] they start having children,” Cowan said in our conversation. “The expectation of the mill is you’re there 24/7 at their beck and call.”

Unconscious bias is much harder to uncover, and much harder to challenge – which is what makes #ChooseToChallenge, the theme for International Women’s Day (IWD) 2021, so timely. IWD organizers say that “from challenge comes change,” and call on everyone to not only celebrate the successes of women, but also to identify and denounce gender bias and inequality in their daily lives.

Here are a few challenges in the forestry sector worth considering: familial and home-life responsibilities still fall disproportionately on women, according to Statistics Canada – and it’s been widely reported that the pandemic has caused an even bigger burden of duty on women. As a result, women may not be able to put in the same amount of “time” to advance their career – so when the time comes for a promotion, they might be looked over.

“The work/life balance thing is an extremely difficult thing for women in the industry [if] they start having children,” Cowan said in our conversation. “The expectation of the mill is you’re there 24/7 at their beck and call.”

Persistent wage discrimination is also a challenge. Data collected by the steering committee of the Gender Equity in Forestry National Action Plan shows that women in the forestry sector earn, on average, less than men for the same job – and, in eight of the top 20 forest industry occupations, the salary spread is greater than 25 per cent.

Education is another key challenge. Pulp and paper is a science-based industry that relies heavily on STEM roles as well as the skilled trades – two fields that are traditionally underrepresented by women. Statistics Canada data from 2016 shows that women comprise 34 per cent of STEM bachelor’s degree holders, and 23 per cent of all science and technology workers aged 25 to 64. And women hold about four per cent of all jobs in the skilled trades.

When I talked to Teddy Townsley, energy manager at Canfor Pulp Products, for her Women in Forestry profile, she flagged available talent as a bottleneck. She said the lack of women in the sector could be tied to the hiring pool being so small – engineering is a massive field with many possible pathways, and pulp and paper is very niche. On top of that, women comprise just 12 per cent of all engineers in British Columbia, where Teddy is based. Canada-wide, it’s 13 per cent.

Unconscious bias is much harder to uncover, and much harder to challenge – which is what makes #ChooseToChallenge, the theme for International Women’s Day (IWD) 2021, so timely.

So, intentions are indeed different than outcomes if the hiring pool barely exists to begin with. We need to ask why there are not more women and underrepresented groups studying to enter STEM fields or the skilled trades. Are they discouraged from pursuing these pathways? Is there a lack of information about opportunities? What cultural groups have more available access to the kind of education required to work in pulp and paper? What biases or challenges exist in how funding is allocated to educational institutions? What about when it comes to people from underrepresented groups accessing loans for education?

This is far beyond a forestry–only issue at this point, but there are things this sector can do – and in some cases is doing – to encourage more women to join. For example, build the talent pipeline as early as possible by presenting to elementary schools and giving tours, or establish scholarships and internships specific to certain groups to encourage more people to join the field.

For more recommendations on how to recruit, retain and support women in the workplace, consult this recently released report by the Trillium Network for Advanced Manufacturing. Gender Diversity and Ontario Manufacturing: Lessons from Five Leading Companies outlines 10 lessons gleaned from five manufacturers, including Cascades, on how to shift workplace policies to be more inclusive.

We’ll be talking about all of this and more at the Women in Forestry Virtual Summit on Mar. 9, where notable speakers from across the industry will share stories and strategies on how to attract and retain women in the sector.

Sign up for free to hear about how the forestry industry is furthering its work on gender equity from HR leaders including Tolko’s Tanya Wick and Canfor’s Kara Biles.

Kelly Cooper, co-chair of the steering committee for Canada’s Gender Equity in Forestry National Action Plan, will give an update on that initiative, and Kate Lindsay, senior vice-president at FPAC, will lead a panel discussion on advancing women in their careers with four industry leaders.

Thank you to all of our summit speakers, as well as Jenna Strachan, Pamela Cowan, Teddy Townsley and the rest of the women who participated in this year’s Women in Forestry profile series (pictured above). You’ll see their stories posted throughout Mar. 8 here at pulpandpapercanada.com and on our dedicated microsite WomenInForestry.ca. Follow along with us on social media at #WomenInForestry – and let us know what you #ChooseToChallenge this year.

This post is part of CFI, Pulp & Paper Canada and Canadian Biomass’ Women in Forestry series celebrating International Women’s Day on March 8. Find more content here and follow on social media with the hashtags: #WomenInForestry as well as #IWD2021 and #ChooseToChallenge.

Remember to join us for the Women in Forestry Virtual Summit on March 9 at 11 am ET/8 am PT! It’s FREE to register. Sign up now!

Related
Editorial: #EachforEqual means opportunities for all in the forestry sector
Pulp and paper’s future leaders: Meet Vanessa Terwoort
Coming soon: The Women in Forestry Virtual Summit is Mar. 9!
Transforming pulp: Can TMP act like kraft pulp for use in N95 masks?