Energy psychology seems to ebb and flow depending on our state of anxiety around oil futures, environment, societal norms, technology, geo-politics and security; we are currently in the high anxiety zone. Energy is the biggest business in the worl... 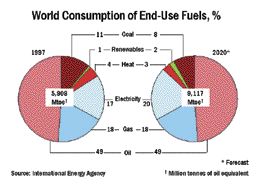 Energy psychology seems to ebb and flow depending on our state of anxiety around oil futures, environment, societal norms, technology, geo-politics and security; we are currently in the high anxiety zone. Energy is the biggest business in the world [approaching $2 trillion / year] and governments are intimately involved with rules, incentives, political spin and taxes. A “step-back” long view may be helpful for putting the energy issue in perspective and designing appropriate strategic positions. The important thing is to avoid knee-jerks based on junk science, hyperbole or agenda-driven politics. The long views are that energy costs have always been declining [in real terms], there is no shortage of fossil fuels [which may however be in inconvenient places] and evidence for man-made global warming / climate change is controversial [solar forces have been slowly warming us since the mid 17th century; we also had hot years in 1106, 1074, 1103 and the 1930s]. This is not to say that changes are not on the cards [CEOs of Shell and BP are calling for carbon dioxide emissions reduction], but they will be driven by social and local environment issues [read government involvement] rather than by the unregulated market forces of supply-and-demand.

Most of the low-cost oil is in unstable parts of the world and the number of new consumers in emerging economies is accelerating; the short-term results are higher oil prices and new emerging suppliers. Since it is price-shocks that are debilitating to the global economy, it has been proposed [Gary Becker, Business Week, June] that governments take a bigger tax bite to stabilize the consumer price and use the funds to direct energy-related social agendas, such as public transit, greater energy efficiency, alternate energy systems or distributed power. Sounds good in theory, but human nature being what it is, riots tend to occur when hefty fuel taxes appear and governments find other priorities for their newfound wealth. Nuclear, wind, tide, biomass, ethanol, hydrogen, solar all have their advocates and all must meet the test of life-cycle-analysis to get the true supply-cost picture, which is frequently distorted by government involvement. Notwithstanding the rhetoric from special interest groups or government support for local agendas, the real-world picture is projected to change little over the next 15 years [see figure]. The long-term price of all natural commodities [including oil and gas] has been on a downward trend relative to the cost of labor and consumer goods for the past 100 years [Julian Simon book: “The Ultimate Resource”]; nothing short of government intervention or mismanagement is likely to change the trends. Over the long-term, the supply of energy is abundant and the price declining; government involvement is the real driving factor for change.

Three powerful forces are now combining to shape the future of the energy industry: markets, greenery, and technology innovation [see The Economist, Feb. 8th 2001]. Together they exert strong pressure for changes, but long-lived fixed assets and positions will make any turnaround slow. However, the overriding driver for change involves governments. When it comes to clean technology, governments can be most effective by providing a level playing field and avoiding the picking of winners. This might be accomplished with measures such as carbon taxes that truly reflect total carbon accounting on the environment and human health, and incentives for investment in distribution systems and distributed generation. Lastly governments need to improve their record in helping developing economies leapfrog into the emerging clean technologies.

The forest products sector has an important role to play in an emerging energy-focused business world. It can help government shape energy policy with respect to carbon balance issues and play a leading role in the development of biomass-based energy systems. From a carbon accounting viewpoint, forest products offer favorable alternatives in a wide range of consumer products. These advantages need to be better recognized and promoted to consumers and their advocates — including government. The role of government needs to be continually monitored and counter-productive, special interest agendas must be vigorously attacked with credible data. The government / energy interface is the most critical, and volatile future trend driver. Energy deregulation increases volatility, but it also opens the door to venture capital and the possibility [some would say probability] for disruptive technologies. Given the uncertainty of the government / energy interface, a scenario approach with an early-warning signal protocol would seem to be the preferred approach for business planning. The only sure thing is that the global warming / climate change issue is very complicated, still an immature science and not given to simplistic solutions.

Alan Procter is an international consultant helping organizations understand future business trends. He can be reached through www.alanprocter.com