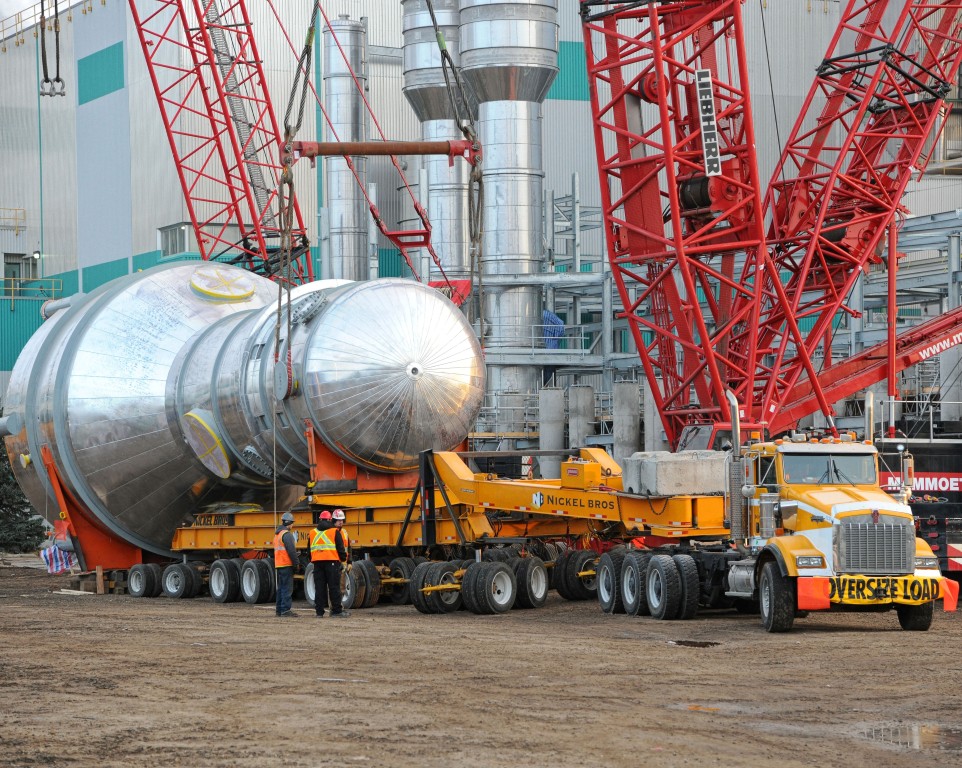 The new evaporator is the final stage of an upgrade that will allow the Grande Prairie mill produce about 23 MW of electricity for sale. Photo: Rob Ganzeveld - FX Photographic Inc.

Imagine 18 separate loads, travelling more than 1200 kilometres, by truck. After crossing the ocean and being barged up a river. This is the epic voyage of the evaporator bound for the Weyerhaeuser pulp mill in Grande Prairie, Alta., about 450…

Imagine 18 separate loads, travelling more than 1200 kilometres, by truck. After crossing the ocean and being barged up a river. This is the epic voyage of the evaporator bound for the Weyerhaeuser pulp mill in Grande Prairie, Alta., about 450 km north of Edmonton. The largest load, the seventh effect portion of the seven-effect evaporator, was 55 m (182 ft.) long, requiring one tractor and several extended trailers to bring it through the mountains. At 7.5 m (25 ft.) wide, it occasionally needed the road all to itself, so the load travelled by night, under strict instructions to minimize disruption to other traffic.

In all, the evaporator project involved 12 oversize loads, requiring special permits and accommodations by the transport authorities in Idaho, Montana, and Alberta. The complex move was handled by Nickel Bros., a Vancouver firm that specializes in moving large objects.

The vessels for the evaporator were manufactured in China and Thailand. They landed in Vancouver, Wash., and were barged to Lewistown, Idaho. The route from Idaho to Alberta is one that has been the subject of some controversy when used for oversize loads bound for the Alberta oilsands.

The size of the evaporator components also causes some challenges at the mill. Wayne Roznowsky, spokesperson for Weyerhaeuser in Canada, notes that portions of the administration building had to be evacuated as a safety precaution when some of the parts were lifted into place.

The evaporator is the final stage in a series of upgrades that revamped the 39-year-old Grande Prairie mill.

A new turbine installed in 2011 was funded in part by the federal government’s Pulp and Paper Green Transformation Program with support from Alberta govermment green energy programs. The evaporator also benefits from some provincial government programs.

Weyerhaeuser also invested in a new recovery boiler for the mill in 2007.

With the exception of the digester, “we’ve basically rebuilt the mill,” says Roznowsky. “The evaporator is the key. It allows us to take full advantage of all of our earlier investments.”

The high-efficiency unit will capture much more steam than the previous evaporator, and coupled with the new turbine that came online this year, will allow the mill to produce about 23 MW of excess electricity. That will give the mill a total of about 27 MW to sell onto the Alberta grid.

Roznowsky explains that the electricity sales are a second revenue stream for the mill, and also act as a currency hedge since the power revenue is in Canadian funds, while pulp is generally sold in U.S. dollars.