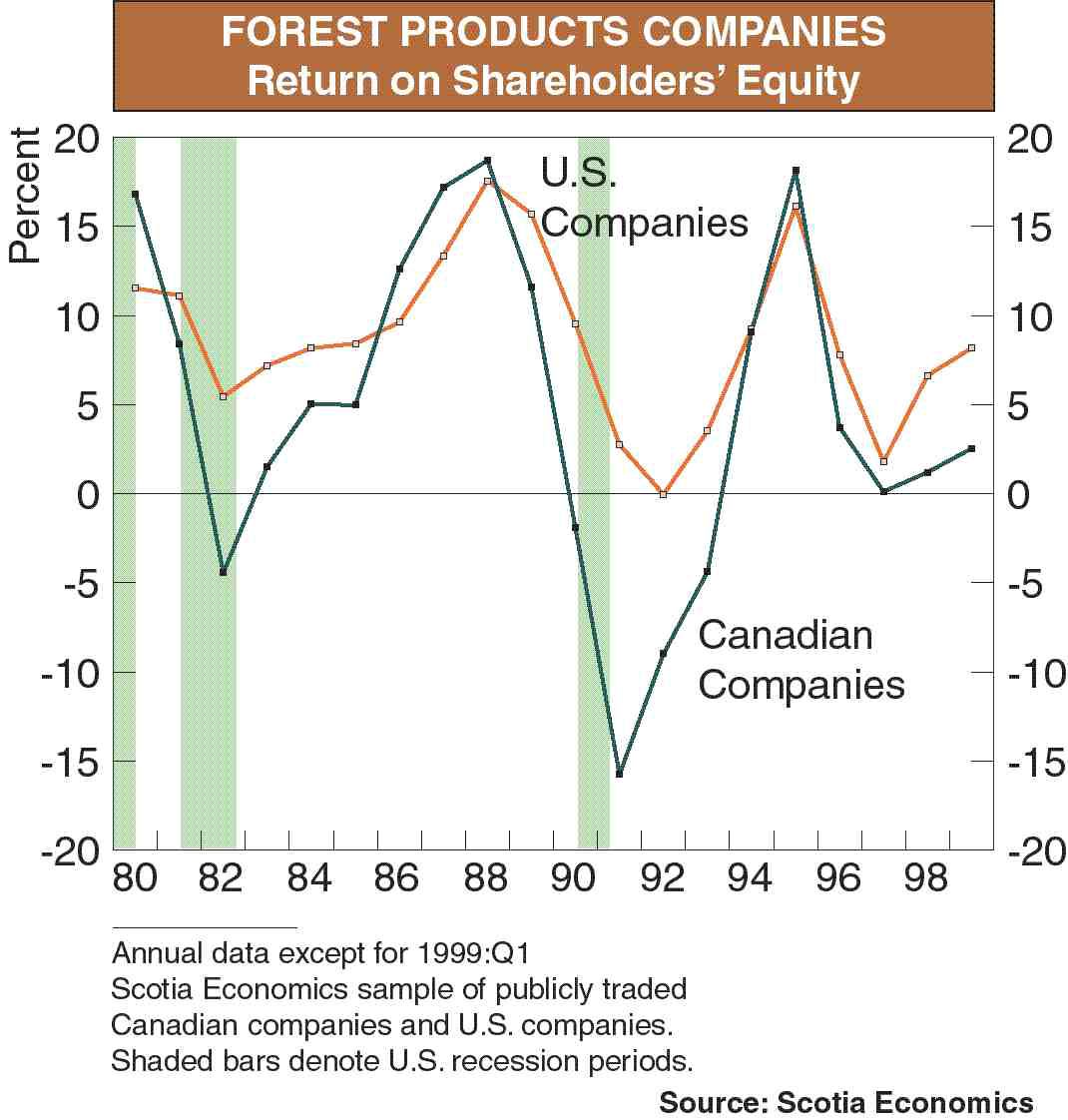 The Canadian forest products industry posted slightly stronger financial results in the first quarter of 1999, after a weak performance last year. However, earnings were mixed, with strength in North …

The Canadian forest products industry posted slightly stronger financial results in the first quarter of 1999, after a weak performance last year. However, earnings were mixed, with strength in North American building products just offsetting a weakening performance in the newsprint sector. With newsprint prices still under pressure in May and very competitive US paper markets, a major turnaround in overall profits probably awaits next year.

The return on shareholders’ equity for a sample of 25 publicly traded forest products companies edged up to 2.5% in the first quarter, after a small loss in late 1998 and only a 1.2% return (after extraordinary items) for 1998 as a whole. However, profitability remains well below the 19% peak of 1995 during a period of very strong pulp and newsprint prices.

In a major shift in the first quarter, Western Canadian companies slightly outperformed firms in Ontario and Quebec, largely due to a product mix centred in lumber and oriented strandboard (OSB) rather than newsprint. The strongest return (20%) was recorded by a BC company selling structural and finishing components for traditional Japanese houses as well as specialized wood products for US, German and Japanese markets. The company has recently benefited from low purchased log costs.

US earnings also strengthened in the first quarter, with an 8.6% return on equity for a sample of 16 integrated companies. As in Canada, the biggest turnaround from the fourth quarter occurred in companies whose product mix is concentrated in OSB and other building products. However, two large tissue and consumer product manufacturers posted the highest returns on equity (36 and 44%). Spectacular returns in consumer tissue account for the stronger overall financial results in the United States.

US wood product prices were still rising in late May. Western spruce-pine-fir 2×4 lumber prices have climbed to US$356 per mfbm – well over US$271 a year earlier — yielding solid profit margins of 35% for BC interior sawmills. OSB prices in the US north central region – the bellwether market for North America – have been even more robust, with prices three times cash costs for new mills in eastern Canada. US residential construction has been exceptionally strong this year. Housing starts averaged 1.77 million units annualized in the first quarter – buoyed by unseasonably warm winter weather, affordable mortgage rates (still only 7.2% for a 30-year term in late May) and solid personal income gains. An unemployment rate of 4.3% represents virtual “full employment”. Home ownership rates have been at record highs.

While US housing starts slipped back to a more sustainable 1.57 million units in April, single-family starts – so important to lumber and panelboard demand – were still a robust 1.2 million. If the Federal Reserve Board follows its recent leaning towards a tighter monetary policy with higher interest rates (to head off any re-emergence of inflation), it would pose a growing risk to US building activity later in the year. However, lumber prices are likely to stay fairly firm through August. US dealers have kept lumber inventories low, anticipating an eventual fall off in demand, and will likely have to replenish supplies until the summer building season is over.

Housing starts in Japan also inched up to almost 1.3 million units annualized in March from November’s 1.08 million low. However, Japanese buyers continue to be cautious and orders for “baby squares” from the West Coast were still light in mid-May.

Pulp prices are rallying, with transaction prices for northern bleached softwood kraft up by more than US$30 per tonne in the US market from February to May (a combination of a higher list price and reduced discounts). A further increase is likely in June as US list prices move from US$520 to US$540.

The recent tightness in world pulp markets has been triggered by pulp stocking to supply more than two million tonnes of new wood-free paper machines that started in Indonesia in late 1998 and are starting up in China this year. Indonesian pulp producers have reportedly withdrawn some hardwood pulp from the European market to supply these new machines. Recent pulp re-stocking in South Korea – where GDP growth rebounded by 4.6% year-over-year in the first quarter – has also contributed to a much firmer tone to Asian markets. Finally, some bleached hardwood kraft pulp capacity has been closed in the US due to tougher environmental regulations and poor profitability.

Nevertheless, there are a number of risks to pulp prices in the late summer and early fall. European consumer inventories of pulp are high and orders could falter in coming months. The recent re-stocking in Asia will also taper off. On a brighter note, pulp prices should rally strongly by late 1999 alongside a substantial slowdown in world capacity expansion and ongoing improvement in Asian demand.

In contrast, sharply lower newsprint prices continue to pressure earnings. Newsprint will be underpinned by a seasonal pick-up in US demand this fall, with strong retail advertising related to the new millennium. However, a recovery in newsprint prices is unlikely until next year.