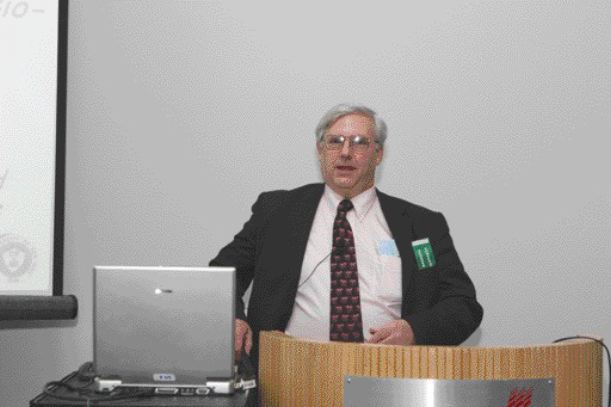 A certain amount of zeal and faith marks all new technologies. Technologies, however, advance the greatest when the need is the greatest. Most assuredly, the North American forest-products industry fa…

A certain amount of zeal and faith marks all new technologies. Technologies, however, advance the greatest when the need is the greatest. Most assuredly, the North American forest-products industry faces such a need, contending with low prices, rising costs and ferocious global competition. Its saviour might be biorefining – a fairly new business model that promises to truly transform the pulp and paper industry, and in the process return it to its glory days of sustained profitability not seen since the late 1970s.

Such is a summary of the cheery sentiments at the Forest Biorefining session on Thursday morning, led by one of its chief enthusiasts, Paul Stuart of cole Polytechnique in Montreal. If interest is a sign of future success, then biorefining will transform the industry for good. (The organizers could have doubled the size of the room to seat all the people standing at the back of the room.)

One of the chief advantages of biorefining is its promise to make higher value-added products like biodiesel and ethanol while at the same time reduce production costs and emissions of greenhouse gases. To be sure, scientists have to overcome a few technological challenges, but the largest challenge might be persuading industry executives to view the current commodity-based business model as outdated.

It’s a leap of faith, but a necessary one. “The North American industry desperately needs new revenues,” said Tom Amidon, chairman of State University of New York’s Faculty of Science and Engineering and director of Empire State Paper Research Institute. “But we have to act quickly. Or else, other areas like Latin America and Asia will catch up.”

Amidon walked the audience through the potential that biorefining holds. Using a straight economic model of inputs and outputs, a biorefinery would have as inputs logs, fibre, chemicals and biomass. Outputs would be pulp and paper, as well as bioproducts like biodiesel, bioethanol, biochemicals and green power that the mill could sell to the grid – generating profits in the process. Among the first products that mills can easily make, with low capital investment, are acetic acid and ethanol, the latter a replacement fuel for gasoline. In the biorefinery, by adding a new processing stage between chipping and pulping, a mill would first extract acetic acid and some hemicellulose, which is water-soluble, and then ferment the hemicellulose to ethanol. The combined market for acetic acid and ethanol is an estimated $6-billion a year. Some companies like Tembec Inc. have taken steps toward biorefining and ethanol production (see PPC, July/August 2005.).

Ethanol, in particular, has a lot of potential to replace gasoline, an oil derivative. BP, a leading petroleum producer, reported that although oil reserves are large — about 1,200 billion barrels of oil, and consumption at about 31 x 10 billion barrels a year – the reserves are finite. Currently, North Americans consume 390 million tonnes of gasoline and 10 million tonnes of ethanol, a fraction of the fuel market. Cellulose, however, is the most abundant organic chemical on earth, with an availability of about 90-billion tonnes per year, said Arnie van Heiningen of University of Maine in Orono. “Managed forests have enormous potential to reduce GHG emissions by producing liquid fuels and bio-products,” he said, referring to his paper, Converting a kraft pulp mill into an integrated biorefinery. As to ethanol’s potential, he said, “You cannot saturate the market.”

In addition to ethanol, van Heiningen said that scientists have identified 12 chemical building blocks derived from hemicellolose. A biorefinery has the potential, given the right market conditions, to not only produce bioproducts like ethanol and diesel fuel, but also carbon fibres for the auto industry as a replacement for steel. “The main idea is to market everything that is processed at the pulp mill,” van Heiningen said.

Product analysis and development is the key, said Ulrika Wising of cole Polytechnique in Montreal. Wising cited the possibility of converting tall oil to biodiesel, which would add another revenue stream for kraft pulp mills at a low capital cost. Canada has 50 kraft mills, half of them integrated, and one-quarter built in the 1960s. Only four kraft mills have been built in Canada in the last 25 years, she said in her paper, Identifying the Canadian forest biorefinery. Yet, the age of Canada’s mills could actually be an advantage. “Canada has an opportunity, because it can now upgrade to the newer biorefining technologies,” Wising said, without having to justify the huge capital costs that newer mills are still recovering.

The development of better ways to separate lignin from the lignocellulose matrix during bioconversion has created the possibility of developing value-added lignin-based products as well as other chemical products, according to John Saddler of the University of British Columbia. His paper, co-written with colleague Warren Mabee, was entitled the Potential of bioconversion to produce fuels and chemicals and stated that the bioconversion platform has the ability to serve as the basis for full-fledged wood-based biorefining operations, generating value-added bioproducts as well as fuel and energy for the forest sector.

Time has come for both research institutes and industries to follow an environmental sustainable path and develop new technologies based on renewable biomass, independent of fossil fuels, was the idea presented by Mohini Sain. Together with co-author Muhammad Pervaiz of the Centre for Biocomposites and Biomaterials Processing, Earth Science centre/Forestry, University of Toronto, the paper, entitled Biorefinery: Opportunity and barriers for petro-chemical industries, stated that, among various products, the bioplastics and natural fibre composites represent a significant potential of growth and success by utilizing renewable feedstock. In the review paper, both these industrial sectors have been chosen for a critical study on the current R&D efforts, opportunities and challenges.

To be sure, the possibilities that biorefining holds are manifold. Executives and key decision-makers have to consider such criteria as economic, environmental, technological and market forces, using what Wising calls a multi-criteria decision-making approach, or MCDM, before going ahead. It’s a matter of persuasion and faith working together. The consensus at the biorefining session, however, was that forest-products companies had better see the light. Those that do might see a sustained cycle of profitability. Cheery news, indeed.