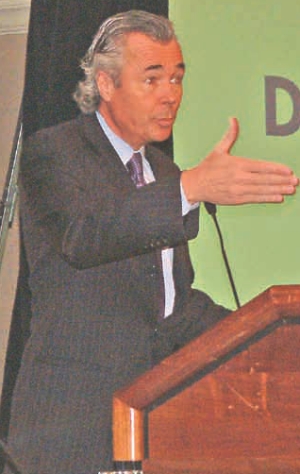 Industry experts at Deloitte delivered cautious optimism tempered with realism on the subject of global markets and increasing competition during the first day of the PAPTAC Annual Meeting in Montreal. Opening the session, Pierre Pettigrew, executive advisor -international for Deloitte, pointed to a “fragile hope” and a net improvement in the economy across the board in 2009. Commenting on the global geopolitical situation, Pettigrew told PAPTAC delegates that the financial crisis accelerated trends that had already been emerging before the crash, such as the rise of Asia. Despite the acceleration, he claimed that China is not ready for prime time, and that global leadership would rest with the United States. Pettigrew highlighted as well the return of “big government” and the often overlooked role of governance in economic matters.

Sbastian Lavoie, assistant chief economist with Laurentian Bank Securities, confirmed in numbers what Pettigrew had suggested in generalities. A modest recovery over all, but GDP growth in Asia is projected to outstrip North America by a factor of at least 3 in 2011. Lajoie closed by noting that credit remains a problem, and that diversification into emerging markets (naming China, India, and Brazil, specifically) is key to a successful future.

Climate change and carbon credits were the topic of a presentation by Skip Willis, senior advisor for climate change with Deloitte. Willis discussed problems with, and potential benefits of, the carbon credit system and specifically with biosequestration (the capture and storage of greenhouse gases by biological processes, achieved through measures such as reforestation and algae production). If handled properly, he said, biosequestration represents potential low cost compliance units in the credit system. Potential disparities between U.S. and Canadian regulations, and a weak industry lobby complicate the potential benefits, however.