Innovation in Canada's forest products sector received international acclaim this week as a Montreal researcher was presented a prestigious award at a gala event in Stockholm, Sweden, for his ground-breaking work. 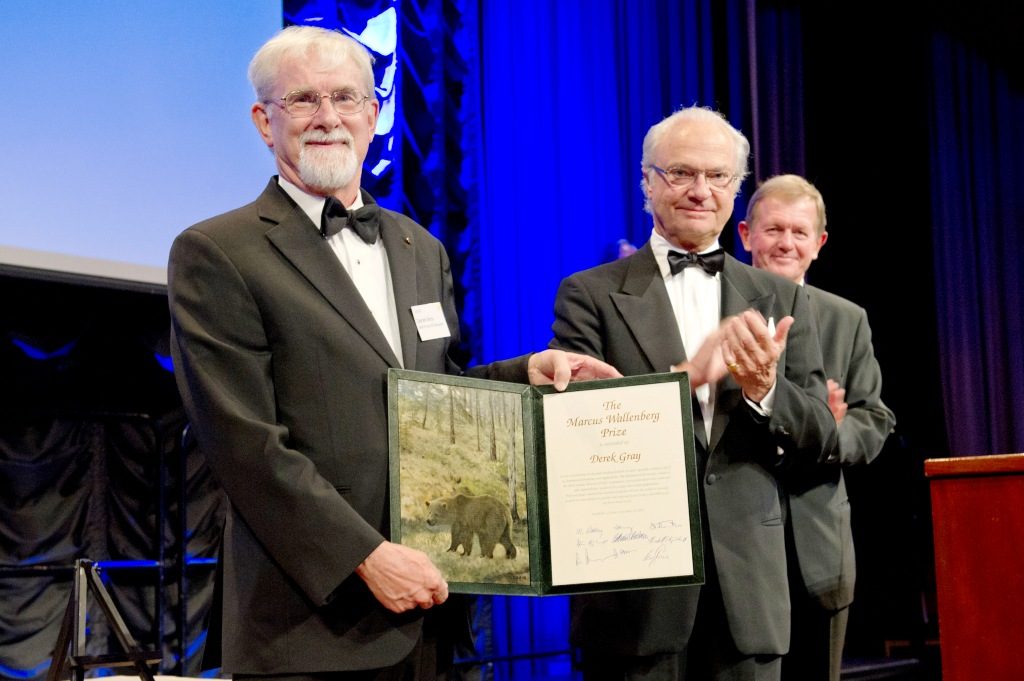 Dr. Gray received the Marcus Wallenberg Prize from His Majesty

Innovation in Canada’s forest products sector received international acclaim this week as a Montreal researcher was presented a prestigious award at a gala event in Stockholm, Sweden, for his ground-breaking work.

Dr. Derek Gray is receiving the Marcus Wallenberg award in recognition of his cutting-edge research on nanocrystalline cellulose (NCC) fibre during his career with McGill University and FPInnovations. NCC is also referred to as cellulose nanocrystals.

The prize was awarded by His Majesty the King of Sweden at a ceremony held in Stockholm on September 23, 2013. A symposium on the award-winning theme and its importance to the forest industry and society took place the next day.

The research carried out by Gray and others on the chiral nematic structures and subsequently into the broader field of nanocrystalline cellulose and its properties has paved the way and facilitated exploitation of wood cellulose in several kinds of value-added applications. The nanoscale dimensions and surface chemistry of NCC and the many forms in which it can be utilized create the potential for its use to enhance the properties of a wide range of products.

The work by Professor Gray and his colleagues helped result in a pioneering NCC pilot project at the FPInnovations lab in Montreal and in the opening of a world first commercial plant, Celluforce, in Windsor Quebec in 2012.

“On behalf of the Government of Canada, I would like to extend my congratulations and thanks to Dr. Gray for his pioneering research and for furthering Canada’s leadership in sustainable forest management practices,” said the Honourable Joe Oliver, Canada’s Minister of Natural Resources. “Thanks to the transformative work of Dr. Gray, as well as that of many Canadian researchers and developers, our country is increasingly being recognized for innovative forest products and technologies.”

According to the Marcus Wallenberg Foundation, Gray’s research has inspired researchers all over the world to intensify research on nanocellulose in general, thus opening future business possibilities for the forest-based sector. The purpose of the Marcus Wallenberg Prize is to recognize, encourage and stimulate path-breaking scientific achievements which contribute significantly to broadening knowledge and to technical development within the fields of importance to forestry and forest industries.

Related
Smithsonian scientists compare environmental impacts of biofuels
BRIEFLY (May 01, 2001)
ARE YOU FED UP WITH THE Y2K BUG?
CEO SERIES: Meeting the Leaders