Dr. Derek Gray, holder of the NSERC/FPInnovations Industrial Research Chair at McGill University, is the 2013 Marcus Wallenberg Prize (MWP) recipient, it was announced at the FIBRE Network research conference. Dr. Gray receives the... 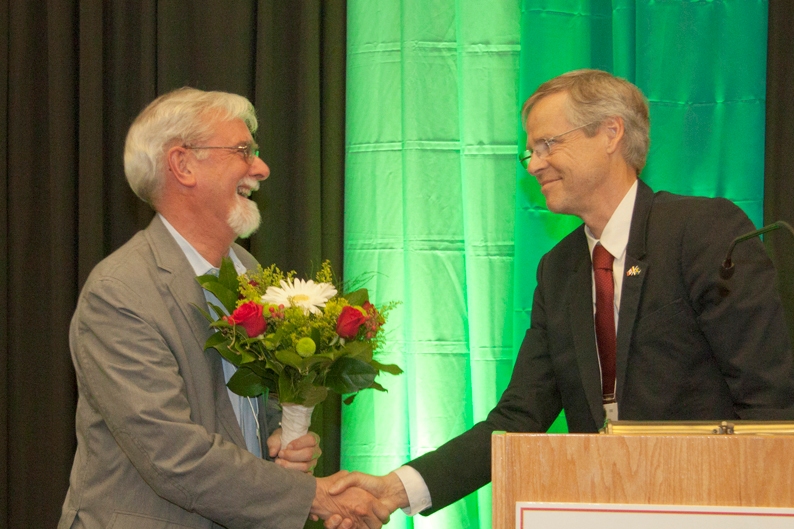 Dr. Derek Gray, holder of the NSERC/FPInnovations Industrial Research Chair at McGill University, is the 2013 Marcus Wallenberg Prize (MWP) recipient, it was announced at the FIBRE Network research conference. Dr. Gray receives the international award from The Marcus Wallenberg Foundation for his pioneering study of cellulose nanocrystals (CNC).

Gray will travel to Stockholm in September to officially receive the prize from H.R. Carl XVI Gustaf, the King of Sweden. Dr. Gray will also conduct a symposium on CNC and its importance to the forest industry.

“Through his research, Dr. Gray has shown that cellulose crystals in water suspensions align spontaneously in a specific pattern, in turn creating unique optical properties”, said Kaj Rosén, executive secretary of the MWP Foundation. “This discovery has extended the boundaries of the uses of forest raw material and in doing so has created the potential for a series of new products in the forest industry such as applications of films in “intelligent” packaging materials, printed electronic circuits on paper, surfacing and filler materials for paper and paperboard, inks and cosmetics and iridescent or magnetic films.”

“The fact that Derek Gray receives the Marcus Wallenberg Prize is fantastic news and is a great way to begin the FIBRE Network Conference. The MWP is considered by many to be the “Nobel Prize” in forest products”, said Theo van de Ven, Chair of FIBRE.

“Derek is always the first to point out that his invention was a joint collaboration with other researchers, such as Jean-François Révol and Louis Godbout, and many of his students. He definitely deserves the credit. Not only was he one of the inventors of cellulose nanocrystals, but worked with his industrial colleagues to move the product to a small pilot scale in FPInnovations and to a larger scale at CelluForce.”

Gray’s discovery originates from basic research findings reported in 1951 by Bengt Rånby at Uppsala University and in 1959 by Robert Marchessault and others at McGill University, Montreal. In 1992, Derek Gray and his now deceased colleague Jean-Francois Revol resumed work on extracting NCC from wood. The basic findings of their work were published and patented between 1992 and 1997, inspiring intensive research into other possible applications of nanocellulose. Since 2003-2004, in particular, this has led to an explosion of publications by various research teams around the world.

The Marcus Wallenberg Prize (MWP) recognizes a single research breakthrough that, in the view of the Prize Selection Committee and the Board of the Foundation, will have a significant effect on the forestry and forest products industries. The Prize sum is 2-million Swedish Krona (SEK) or the equivalent of more than Cdn$300,000.