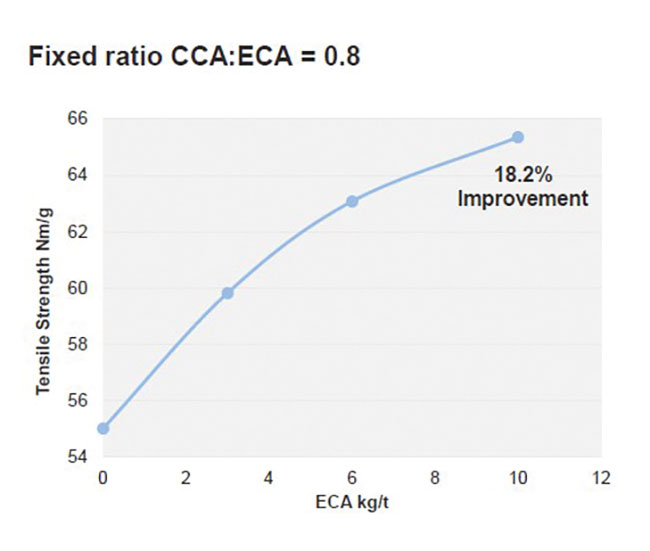 At PaperWeek Canada 2020, held in Montreal this past February, there was a common theme to several of the papers presented in the papermaking sessions – papermaking additives based on renewable, bio-based products.

It’s said that the easiest place to sell a new product idea is in a market you already know, and that’s certainly the case here – the paper industry already understands bio-based raw materials, and will adopt such a solution rapidly if there are economic or quality benefits as well.

It was first introduced to the market in 2013 by the research labs of AkzoNobel (acquired by Kemira in 2015). This cellulose-based product can replace synthetic polymer-based dry strength additives, which are not only petroleum-derived, but can have a limited shelf life and give variable performance in furnishes with high conductivity or calcium content.

Kemira is offering the product as part of its EcoFill Lite program, which is aimed at reducing basis weight without reducing strength. This program combines the ECA with a cationic polymer or charge control additive (CCA), since the cellulose derivative is anionic in nature. The ECA can be shipped as a stable, dry powder and made down into a pumpable form onsite.

Lab tests showed that the use of 6-10 kg/t of ECA can lead to a 15-18 per cent increase in tensile strength. When the technology was taken to a mill making containerboard grades with high levels of anionic trash, not only was there a 10 per cent improvement in STFI compression and ring crush strength, but drainage and retention improved, and it was possible to decrease basis weight and increase machine speed. (See Figure 1, above).

Next, a paper by Marc Foulger of Valmet discussed the addition of microfibrillated cellulose (MFC) on the surface of paper using a curtain coater over the flat boxes of a Fourdrinier machine.

The MFC used here is made using an entirely mechanical treatment of cellulose fibres. In both pilot-plant and on-machine trials, MFC has been applied, alone or in combination with fillers, starches, or other additives, at a one to two per cent consistency with the objective of producing 2-8 g/m2 of coating on the surface of paper or board.

Due to the very fine cellulose material, significant improvements in surface smoothness and barrier properties of the top side are possible. This could be interesting for several grades including packaging, graphics, release and specialty papers.

Valmet has built one commercial unit that has been running for over a year, and is building a second. It also has two pilot units with widths of two metres and 4.5 metres that can travel to mills for trials complete with pumping systems.

For trials in North America, the MFC can be made at the University of Maine’s pilot plant and shipped at low consistency in a tote bin, but Valmet’s vision is to commercialize the MFC production process so that it can be made onsite at a user’s paper mill.

Because MFC is made of cellulose, this technology could be an interesting way to make greaseproof papers for food packaging grades without using polyfluoroalkyl substances (PFAS), which in recent years have flagged some health concerns.

An even better target, if the MFC coating can develop enough gas impermeability, would be to replace poly-coated or laminated food packaging grades, making them not only sustainably sourced, but recyclable. See Figure 2, below. 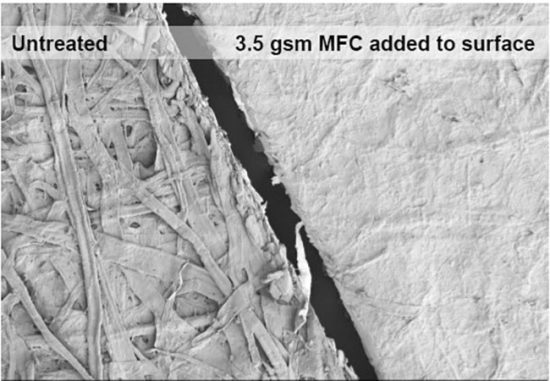 Next, Lucie Mandanici of Roquette and Gilles Beaulieu of Quadra presented a product based on pea starch that is new to North America. Roquette is a French-based company specializing in plant-based ingredients, especially starch. Roquette has a marketing arrangement with Quadra for its business in Canada.

The pea starch is aimed at the niche application of adhesives for double-wall and triple-wall corrugated containers. To understand why this is an appropriate application, a basic understanding of starch chemistry is required.

When a starch slurry is heated, it undergoes an extremely rapid increase in viscosity as the starch granules gel and become tacky. The temperature at which this occurs is called the gel point. While the gel point of a corn starch product is about 55 °C, it is 40 °C for pea starch.

This is particularly important for double-wall and triple-wall corrugators because the heat to bond the plies together is applied from the outside surface and is not conducted easily to the inner plies. With the lower gel point of pea starch, bonding is more rapid and complete than with cornstarch. See Figure 3, below. 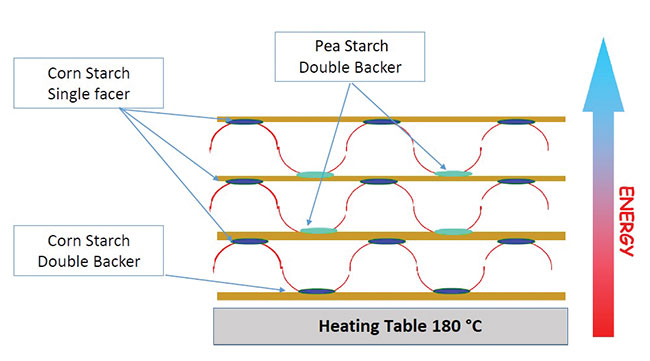 Pea starch has already been extensively trialed in both Europe and North America, and it has been shown that the lower gel point and faster bonding of pea starch also lead to other advantages, including reduced time before conversion into containers, reduced waste and improved printability.

At one North American triple-wall customer, a glue containing pea starch to replace a corn starch formula resulted in a 42 per cent speed increase from 300 to 425 ft/min, and the use of additional resin and bonding in the starch formula could be eliminated, giving a large payback for the slightly higher cost of the pea starch.

Other advantages are better penetration of the adhesive into kraft liner with a resulting increase in stiffness and improved water resistance of the bond.

Roquette is planning to start producing pea starch in Manitoba, and perhaps the most interesting business aspect of this project is that pea starch is actually considered a residue from the extraction of pea protein, for which there is a growing demand from consumers that want plant-based protein instead of meat-based due to health and global warming concerns.

Elisabeth Lackinger-Csarmann of Kemira gave the final presentation at PaperWeek to fall under the category of green chemistry, on green ASA technology.

ASA (alkenyl succinic anhydride), a common internal sizing agent for water resistance of paper and – unlike its rivals rosin sizing from pine trees and AKD from palm oil – is a petroleum-based product.

Kemira undertook a research project to find a product similar to ASA, but from renewable materials. An initial scan of vegetable oils led to a particular variety of sunflower oil with high oleic acid content.

They call this new product MSOHO, for maleated sunflower oil high oleic, which looks like a branched version of the original ASA molecule (figure 4).

As well as being made from a renewable raw material, MSOHO turns out to be much more stable to hydrolysis.

When ASA is re-circulated in white water, it breaks down to the acid form, which can combine with dissolved calcium to produce deposits. Tests show, however, that the MSOHO half-life at 70 °C is 100 min versus 30 min for ASA.

Unfortunately, the initial material is much more viscous than ASA, presenting some challenges for handling. For now, Kemira is marketing a 30/70 mixture of MSOHO/ASA that can be handled with existing ASA equipment.

They have obtained approvals for use of MSOHO in food contact paper grades, research is ongoing to reduce viscosity, and equipment is forthcoming to handle sizing at higher temperatures, which will allow easier flow.

Martin Fairbank has worked in the pulp and paper industry for over 30 years and is currently a consultant and technical writer.

This article originally appeared in the Summer 2020 issue of Pulp & Paper Canada.