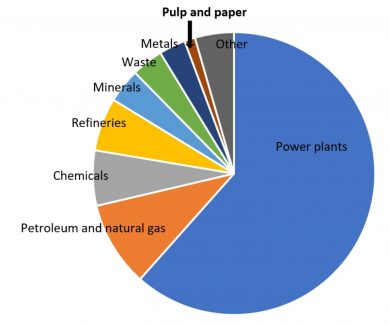 The pulp, paper and print industry is one of the lowest contributing industrial sectors to global greenhouse gas (GHG) emissions at only one per cent of emissions worldwide, but consumers don’t know it.

One of the reasons for the relatively low GHG emissions of the forest products industry is its use of renewable fuels. For example, bioenergy use by paper and wood product mills in the U.S. prevents the emission of 181 million metric tons of CO2 equivalents, by merely using waste wood from manufacturing operations. This practice produces the same reduction in GHG emissions as removing about 35 million cars from the road.

In Canada, the forest products industry has made great strides to reduce GHG emissions in production, by cutting the use of coal and cutting oil use by over 90 per cent since the year 2000. In fact, 57 per cent of the industry’s energy use in 2015 was generated by bioenergy.

Forest products also play a key role in global carbon sequestration (absorption) and the mitigation of GHG emissions. As they grow, trees remove CO2 from the atmosphere and they release oxygen, allowing us to breathe and sustain life on the planet. By managing our forests sustainably for the long-term we can ensure that they continue to provide economic, social and environmental benefits, including climate change mitigation. For example, forests in Canada removed 150-160 million tonnes of CO2e from the atmosphere annually (between 2005 and 2016).

A recent scientific paper has shown that the regeneration of forests through sustainable practices in the paper industry may lead to more carbon sequestration. Globally, younger forests (those growing for less than 140 years) store 1.17-1.66 billion metric tons of carbon per year while old-growth forests sequester 950 million-1.11 billion metric tons.

Forest products like paper continue storing carbon even as a finished product and beyond their life in the forest. It is only if paper is landfilled, burned or left to decay that it begins to release CO2 again. In 2016, forests and wood products in the U.S. captured and stored roughly 10 per cent of all carbon dioxide equivalents emitted by the U.S.

But then why do people assume that going digital is greener? The “hidden” life cycle of our massive electronic infrastructure may be one reason. The fact is that many of us don’t think much about what goes into the manufacture and operation of our computers, smartphones, the energy needed to operate server farms, store massive amounts of digital information, and send emails. It is significant, but largely out of sight and out of mind.

The digital revolution is having a growing impact globally. Let’s explore a few key facts.

The ICT industry and infrastructure still relies heavily on fossil fuels and although it seems harmless to send an email, the world’s emails generate close to 300 million tonnes of CO2, equivalent to the CO2 emissions of over 63 million cars.

This growing environmental impact of “going digital” is not going unnoticed by consumers who were specifically asked to rank several materials and products based on how environmentally friendly they are (Figure 2). Wood and paper ranked at the top and electronics and plastics at the bottom (i.e. having the most environmental impact). 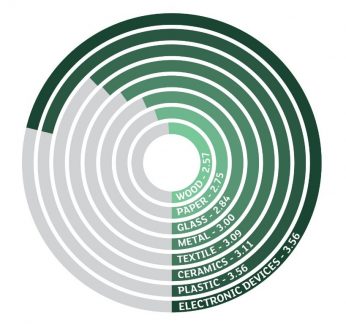 Clearly many people are recognizing some of the unique features of paper such as its renewable raw material and high recycling rate, especially compared to electronics.

The reality is that paper has a great story to tell when it comes to renewable energy use and low GHG emissions compared to other materials. In addition, North America is among the world leaders in sustainable forestry practices, which are vital to reducing our society’s impact on climate change.

Read more about consumer perceptions of the print and paper industry in the Two Sides Busting the Myths reports for the U.S. and Canada.

This article was reprinted with permission from Two Sides North America. Read the original, including all references, at Two Sides.