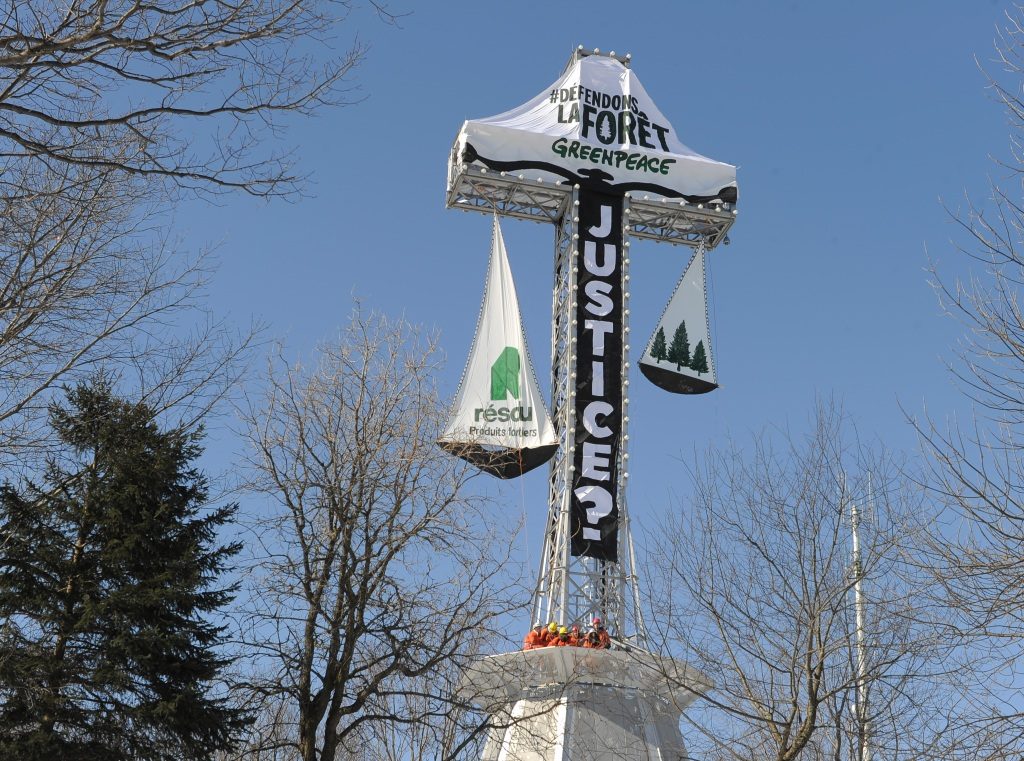 Greenpeace and Resolute Forest Products have stepped up their public relations battle again, with the environmental group staging a display on Mount Royal in Montreal, and the forest products company defending itself with information about…

Greenpeace and Resolute Forest Products have stepped up their public relations battle again, with the environmental group staging a display on Mount Royal in Montreal, and the forest products company defending itself with information about forestry practices in the Boreal region.

On March 18, Greenpeace activists decorated the Mount Royal cross to look like scales of justice, with one side displaying the logo of Resolute Forest Products, and the other representing the Boreal forest, its communities and wildlife.

“Today we’re seeking to restore a healthy balance in the Boreal by standing up for the future of the forest and against Resolute’s destructive logging practices,” said Nicolas Mainville, Quebec director for Greenpeace Canada. The group alleges that “Resolute is responsible for logging in First Nations’ territory without consent and destroying critical caribou habitat.”

The statement continues: “Greenpeace has even acknowledged making untrue statements about the company and has issued a retraction. Since then, they have persisted in promoting misinformation concerning Resolute.”

“Our industry has clearly committed to the responsible use of a renewable resource that is widely available across our territory. Moreover, collaboration between our businesses, environmental groups and Aboriginal nations is often cited as an example,” remarked André Tremblay, CEO of the Quebec Forest Industry Council (QFIC).

“Considering these facts, how is it possible to claim there is an imbalance between protection of the forest and industrial forest activity? Deplorably, Greenpeace has relied on practices from the past to denounce one of the sectors that has made the greatest efforts in the environmental area over the last 20 years,” the QFIC’s CEO asked.

Claude Dupuis, president of the Fédération québécoise des coopératives forestières (FQCF, or Québec Federation of Forestry Cooperatives) lamented the extent to which Greenpeace is disconnected from the reality of forests and the people who work in them. “This blanket outburst belittles all workers in the sector as well as Quebec’s forest regions. By steering public opinion in this direction, Greenpeace devalues wood as a material that could likely play a vital role in greening Quebec’s economy.”

“Canadians have much to be proud of when it comes to the sustainable management of our forests,” said Richard Garneau, president and chief executive officer. “This site will offer a wealth of information about the boreal, the forest products industry, and the future of this renewable resource upon which so many of us depend.”

According to the Boreal Forest Facts site, less than a quarter of one percent of the boreal is harvested each year, with five times that amount affected annually by natural disturbances such as fire, disease and insects. Well over 40% of the boreal is wholly out of bounds for the forest products industry in both Ontario and Quebec. Of the area available for harvesting, additional portions (38% in Quebec, and 34% in Ontario) have been set aside for conservation or other purposes.

Resolute Forest Products produces newsprint, specialty papers, market pulp and wood products. The company owns or operates more than 40 pulp and paper mills and wood products facilities in the United States, Canada and South Korea, and power generation assets in Canada. Resolute has third-party certified 100% of its managed woodlands to at least one of three internationally-recognized sustainable forest management standards.