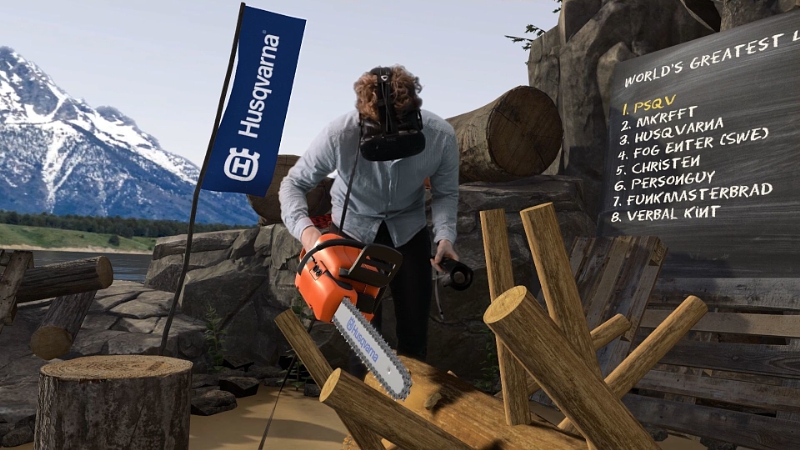 The Husqvarna VR experience brings the player to a beautiful mountainside with a lake where the player has to use a Husqvarna 359 chainsaw to remove 24 branches from a 2.7 meter long log.

For all armchair lumberjacks, Husqvarna has released the first virtual reality (VR) chainsaw game – Husqvarna Limberjack. Via the Steam platform, the game is now available to download world-wide for anyone that wants to test their limbing skills and compete for the new world championship title.

“VR limbing combines two extremes, one of the oldest professions in the world together with the newest technology available,” says Lars Strandell, multiple medallist from the bi-annual World Logging Championship. “Husqvarna Limberjack is fun and educational and just like limbing in the real world, technique, precision and speed is crucial for productivity and a good result.”

The Husqvarna VR experience brings the player to a beautiful mountainside with a lake where the player has to use a Husqvarna 359 chainsaw to remove 24 branches from a 2.7 meter long log. The player needs to pick up the chainsaw and remove the branches as accurately and quickly. Just like a professional logger, the player needs to limb fast, and with precision. If branches are not removed properly, the player will need to go back and re-do, losing time.

The exhilarating game includes a local as well as a global high score list, making it fun to compete both in groups at home and online against other VR limberjacks around the world.

Limbing is a difficult and time-consuming part of professional logging that requires good technique. It refers to the process of removing branches from a fallen tree before the log is transported away. Husqvarna Limberjack is inspired by one of the five disciplines from the World Logging Championship, a bi-annual competition that gathers the best 150 best loggers from around the world. The current world record in real limbing is less than 9 seconds.
Instructions and availability

The game is optimized for HTC Vive and can be downloaded for free on Steam and is also available via www.limberjackVR.com