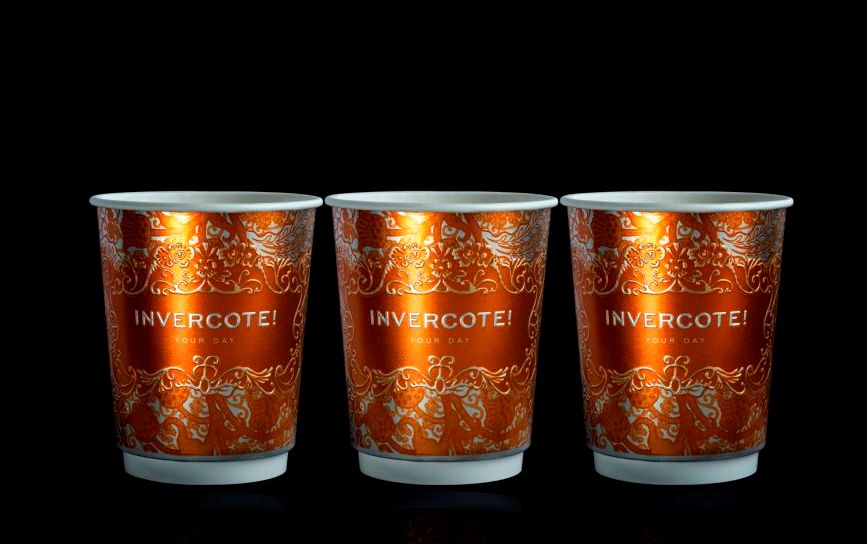 Printed in one colour but with an embossed pattern and message

How elegant can a beverage cup made of a paper material be? Iggesund Paperboard wanted to test the limits of what is possible and decided to create a large, decorative cup with a double-walled construction. The double-walled construction means it is possible to use one material inside the cup and another for the outer wall, which functions as both a heat shield and a brand carrier.
“For the cup’s inside we chose Invercote coated with polyethylene (PE) and for the outside we used Aluvision, which is Invercote extrusion coated with a thin layer of aluminium foil plus PE on top of the foil,” explained Anna Adler, who is in charge of the project for Market Communications at Iggesund Paperboard. “We wanted the metallic feature in order to achieve elegance and shine even though we only printed with one colour, vintage orange.”
The project used an ornamental pattern that framed Iggesund’s Invercote brand. The plan was to cover everything except the pattern with the orange colour and then get the pattern and product name to shine by giving them a raised embossing.
“We did a number of tests to find out how much we should emboss but finally decided to emboss the entire pattern and brand name,” explained Iggesund’s Technical Service Manager Alex Guglielmi. “It was interesting to see how the embossing made the metallic tones that weren’t overprinted with orange really shine. A real eye catcher.”
Matching the printed and embossed areas was a real challenge. To be certain of avoiding any misregister, it was decided to reduce the number of cup blanks per printed sheet from 27 to 24.
“Invercote has fantastic dimensional stability but sometimes it’s better to be on the safe side,” Guglielmi said. “Instead of going with 27 we decided to be cautious and only do 24. It’s still a fantastic result for anyone who wants elegance and a visual impression that can convey a brand.”
The Swiss toolmaker SMR Stanztechnik AG supplied the high-precision embossing tool and the printing was then done by the Italian paper cup specialists SDG, Scatolificio del Garda S.p.A.

The paperboard’s printability and ability to be finished to a high level of elegance are not the only reasons why Iggesund believes in a renaissance for paperboard-based beverage cups. Competing materials such as traditional plastic or polystyrene foam cups create a much higher carbon footprint than a cup made of paperboard with a thin PE coating.
“A cup made of PE-coated Invercote has a carbon footprint that is scarcely a quarter the size of the one left by the same cup made of plastic – just comparing the weight of the materials used,” Adler emphasized.
Iggesund Paperboard is part of the Swedish forest industry group Holmen.