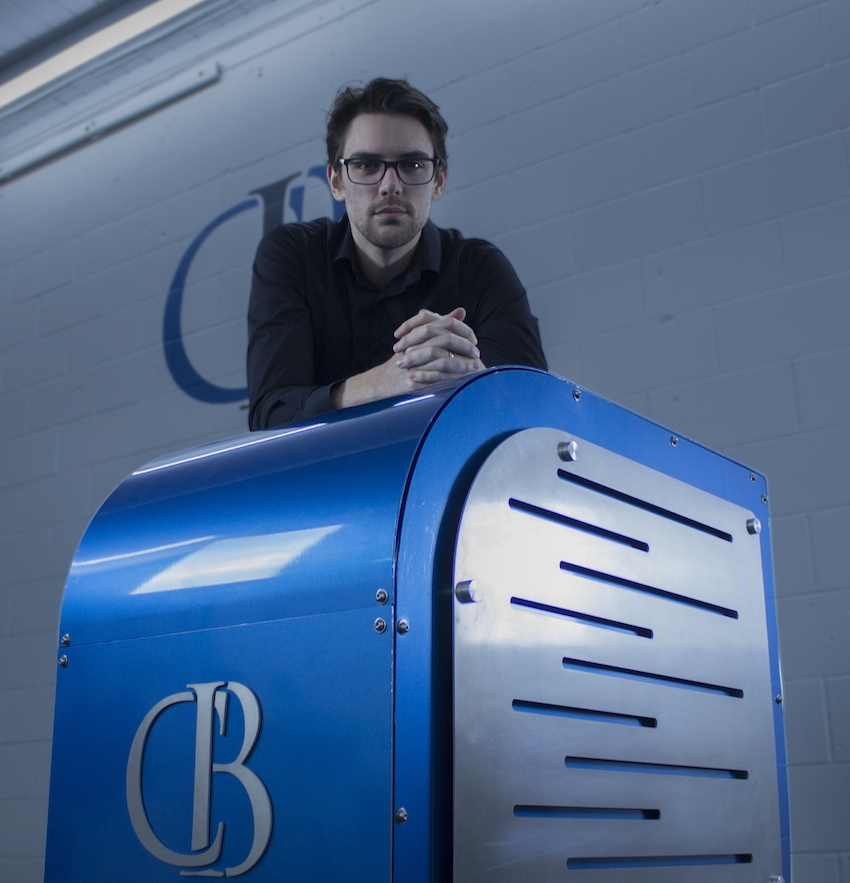 It calls its mobile ice-blasting machine the IceStorm90 because it produces what looks like a storm of ice pellets that can be focused into a stream as narrow as two inches wide. Although it operates along lines similar to earlier technologies that blast a medium such as pressurized water, sand, sodium bicarbonate, or dry ice pellets onto a soiled or contaminated surface, Coulson Ice Blast vice president Foster Coulson says ice blasting represents a major advance in environmentally friendly cleaning.

“As far as I know, we’re the only ones doing it, and we’ve spent a lot of time and energy filing new patents to protect the technology. It’s something unique and special, and we’re very excited to bring it to market and really try to advance the state of industrial cleaning — which hasn’t really seen any innovation in the last 70 years since dry ice blasting technology was invented in 1947. Over the same time period, environmental regulations have significantly increased, yet innovations in technology have been lacking.”

How it works
Coulson says ice blasting technology exceeds almost every environmental regulation that has been set. “It involves no added chemicals, no environmental contaminants, negligible airborne contaminants, and minimal residual water waste. It’s pretty much the most environmentally friendly way you can clean.”

“On average, our system uses 95 per cent less water than a pressure washer,” he specifies. “By contrast, pressure washing varies with the technology, but it can use up to about 1,200 U.S. gallons of water per hour. Depending on what you’re blasting, trying to treat and dispose of that amount of water can be very costly.”

He explains that the environmental advantages of cleaning with ice derive partly from the fact that it is the only medium that can exist during blasting in all three phases of matter: solid, liquid and gas.

“It hits the surface it’s cleaning as a solid, then half of it turns into a gas which evaporates, and the other half stays in a liquid form which pulls airborne contaminants down to the ground instead of releasing them into the atmosphere.”

“On average, blasting at three pounds a minute you’ll have around 10 gallons an hour of water residual waste.” In terms of media costs, ice is also cheaper than, say, dry ice blasting pellets, which cost from 90 cents up to two dollars per pound. According to Coulson, ice costs less than one cent per pound to make or 12 cents per pound when purchased.

Coulson says other factors that make ice attractive as a cleaning medium are that it is natural and readily available. “For other chemical processes and dry ice blasting, you need to buy artificial media in the form of premade chemicals or dry ice pellets. But ice is natural and bare-bones basic. If you wanted to, you could make it inexpensively yourself from any type of water source — tap water, for example — and store it indefinitely in a freezer. Contractors often store ice in 300-, 400-, or 500-pound totes where it lasts for four or five days.” As alternatives to making ice yourself, Coulson Ice Blast also sells ice-making machines and offers ice distribution through its partnership with Reddy Ice (U.S.A.), an ice manufacturing company.

He adds that ice is one of the only cleaning media that can turn corners during blasting. “If you needed a cleaning agent that can travel, say, along a 30-foot hose with S-curves and a 90-degree corner, few media could do the job, because most of them lose energy travelling around corners and get stuck. But ice would be able to clean perfectly throughout the whole length of the hose.”

Success in the industry
Ice blasting is suitable for a range of industries including aerospace, plastics, power generation, printing, and pulp and paper.

One example is the AFCO Denso/Bosch plant in South Carolina, which uses the equipment to deburr copper motor parts. “Since 1995, AFCO has continuously operated an Ice Blast machine to deburr copper motor armature faces for fuel pumps. The use of Ice Blast to deburr has been crucial to producing our high quality fuel pumps…for the North American automotive industry,” wrote AFCO project engineer Jack Engram in a statement. “Ice Blast technology continues to be a cost-effective solution for our deburring and precision cleaning needs. Aside from normal maintenance, the Ice Blast equipment has performed reliably for the last 20 years. The ability to rely on this machine eases our minds in production because we are confident that the Ice Blast will achieve the necessary standard of clean every time.”

Rich Canadian roots
Coulson Ice Blast grew out of a family business started by Coulson’s grandfather, Cliff, when he launched a small logging company in Port Alberni on Vancouver Island in 1960. Coulson’s father, Wayne, subsequently grew the company into The Coulson Group, a conglomerate whose other activities have included manufacturing wood products and aviation. Within the last two years, they sold off the logging and lumber operations to concentrate on aviation and ice blasting. While Wayne continues as president and CEO of The Coulson Group, Coulson’s brother Britton is vice president of the aviation division, which involves overhauling aircraft components and aerial fire suppression.

The natural surroundings of Port Alberni yield such local attractions as salmon and sport fishing, provincial parks, hiking trails, mountain climbing, Cathedral Grove (an old-growth forest of towering Douglas fir trees, some over 800 years old), and Della Falls (Canada’s highest waterfall). Given this superb environment, it is not surprising that environmental friendliness is a key value underlying The Coulson Group operations.

Its association with ice blasting equipment began in 2012, when it wanted to remove paint from a Martin Mars aircraft it had acquired and repaint the plane in their fleet colours: red and white. The paint removal task raised technical problems, however, since the Martin Mars can only take off on water, it had to stay situated beside a lake. This complication ruled out pressure washing, which requires more water than was available at the plane’s site. Sand blasting was equally impractical, since the Martin Mars is the world’s largest flying water bomber, too big to permit the full containment that sand blasting requires.

Instead, an engineer at The Coulson Group suggested and built an ice blasting machine using technology he learned at a previous job at Universal Ice Blast, an American company that manufactured ice blasting equipment until it went bankrupt in 2001. The Coulson Group was so pleased with the machine’s results that they tracked down the former owner of Universal Ice Blast, purchased the technology from him, and have been refining it and planning the future of Coulson Ice Blast ever since.

This article was originally published in the Fall 2017 issue of Pulp & Paper Canada.