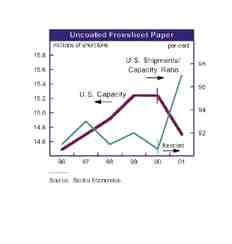 Despite the slower pace of US growth now underway, considerably tighter North American supplies will underpin and likely boost prices for uncoated freesheet paper in the coming year. The world’s large…

Despite the slower pace of US growth now underway, considerably tighter North American supplies will underpin and likely boost prices for uncoated freesheet paper in the coming year. The world’s largest manufacturer has recently announced closure of 820 000 short tons of outdated high-cost capacity in the United States — probably intended to cut costs, keep paper supplies in line with demand and generate greater shareholder value. These machine closures amount to 5.4% of overall US capacity. Potential mergers among key producers in the United States may also be accompanied by further capacity rationalization.

The announcement of a major round of US capacity closure comes in a year of surprisingly lacklustre demand for bond and copy paper. Though US GDP growth advanced by a robust 5.2% in the first half of 2000, apparent consumption of uncoated freesheet paper actually dropped by 1.1% from the second half of 1999. A slowing in US GDP growth to 2.4% in the third quarter was accompanied by a further reduction in demand. Buyers have been working down inventories — possibly anticipating a slower pace of economic growth. Corporate replacement demand for personal computers — usually associated with strong demand for cut-size paper — has also been softer this year, following Y2K-upgrades in first-half 1999. Forms bond consumption was particularly weak in the second quarter — likely hurt by the growing use of electronic media.

However, market conditions will close the year on a stronger note. Combined buyer and producer inventories have fallen to the lowest level in three years and US forms bond producers have reported a sharp pick-up in orders since September. Commercial printers in Ontario and Quebec also have solid order backlogs into January.

Closure of 820 000 short tons of capacity may overstate the effect on US market conditions, because the company involved is already taking mill downtime. Some output may also be shifted to more efficient machines. Nevertheless, this capacity shuttering should still result in a permanent output reduction of more than 600 000 short tons (equivalent to 4% of US consumption). Even if US apparent consumption only rebounds by 2% next year, with some re-stocking by consumers, the shipments-to-capacity ratio will soar to about 96-97% (one of the highest levels in the past 20 years) from 92% in 1999 and 90.6% this year. This assumes a significant increase in imports from Asia, following huge expansions, especially in China.

Market conditions will also tighten in Europe. The shipments-to-capacity ratio will rise over the next 12 months as three uncoated freesheet machines are converted to coated paper. Roughly 665 000 metric tonnes of capacity (two machines in Finland and one in Sweden) will be converted or 6.3% of overall capability totaling 10.5 million metric tonnes.

While these developments point to stronger prices for uncoated freesheet paper in the United States — Canada’s main export market — the outlook is not without risks. Key among these are the possibility of a flood of cut-size paper imports from China and South Korea and the potential for lower pulp prices in the opening months of 2001. However, indicators for the US economy still suggest a “soft landing” and a pick-up in activity in the second half of next year. While growth in Asia (outside of Japan) will probably also slow in the next six months, following a strong rebound from the Asian crisis, the outlook remains favorable. Any decline in pulp prices in early 2001 should be short lived.

Also, on a positive note, industry practice in pulp appears to be changing. Nordic pulp producers are announcing mill downtime — ahead, rather than after, a slowdown in demand — to steady market conditions and prevent mill inventories from building to excessive levels. US linerboard producers have also reduced output this year to keep prices at lucrative levels for their shareholders. US linerboard exports to Asia and Europe have been hurt by the broad-based strength of the US dollar. These initiatives point to a more disciplined approach by the pulp, paper and paperboard industry consistent with steadier prices and increased investor returns.