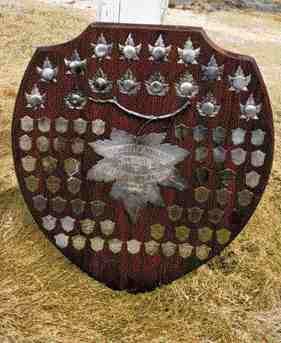 Abitibi-Consolidated Fort Frances and Kimberly-Clark Terrace Bay have been awarded The Safest Mill in Canada Contest Class A shield for 1997 and 1998 respectively.

MONTREAL, QC — Following a $23-million modernization program, Kruger has restarted the No. 1 newsprint machine at its Bromptonville mill, in the Eastern Townships, QC, after a 26-day shutdown. Major …

MONTREAL, QC — Following a $23-million modernization program, Kruger has restarted the No. 1 newsprint machine at its Bromptonville mill, in the Eastern Townships, QC, after a 26-day shutdown. Major improvements on this machine will lead to significant increases in paper quality and machine productivity. The investment covers a new headbox, modernization of the forming section as well as various improvements to the drying section, calender and winder.

“We are presently in a better position to serve our customers by offering newsprint with superior printability and runnability in the pressrooms,” said Daniel Archambault, general manager of the Bromptonville mill. This project is part of a comprehensive modernization program announced last June 5 and carried out with the support of Investment Qubec’s FAIRE program.

The company also held ceremonies July 10 to reopen the rebuilt No. 7 machine at its Corner Brook pulp and paper mill in Newfoundland.

EDMONTON, AB — Eight Alberta forest companies have joined forces to increase understanding of the science and practice of mixed wood management in Alberta’s boreal forests. Members of the Mixedwood Management Association will spend approximately $700 000 over the next three years to improve the management of mixed spruce and poplar forests, and to sustain fibre, biodiversity, social and ecological values.

KINGSEY FALLS, QC — Cascades announced that it has reached an agreement, through its subsidiary Perkins Paper, to acquire the Consumer Products Division of Plainwell, Inc., for a total purchase price of $US 64.2 million. The Consumer Products Division consists of two tissue mills, located in Eau Claire, WI, and in Ransom, PA, having a combined annual capacity of close to 110 000 tonnes of tissue paper made mostly of recycled fibres. Also included are the converting and distribution facilities for the Ransom mill, located in nearby Pittston, PA.

NEW ORLEANS, LA — Despite the economic challenges faced by the newspaper industry in the first quarter, the Newspaper Association of America’s annual capital equipment survey found that, overall, the responding newspapers plan to increase their technology investments this year. “Much of the spending is for multi-year projects which were already budgeted for or under way before the economy cooled,” explained Tom Croteau, the NAA senior vice president of technology.

WISCONSIN RAPIDS, WI — Stora Enso North America announced that it recently completed a paper order with Time Inc. using “Extensible Markup Language” (XML), an initial step in the evolution of e-commerce between forest and paper product producers and their customers. The June 13 paper order, made via the papiNet standard, is the first production implementation of a papiNet standard message in North America.

The Sustaining Members Group will again sponsor the New Technology Session at PAPTAC’s 88th Annual Meeting to be held at the Palais des Congrs in Montreal from January 28 to 31, 2002.

The object is to allow Sustaining Members to present brief sales-oriented papers which, because of their commercial nature, do not fit into other sessions at the meeting. The theme of the session is new developments relating to all aspects of pulp and paper production. The paper may be presented by:

the member and client jointly.

For more information, please contact the committee chairman, Dieter Kaschel, Nash Engineering at 302-459-3900 or e-mail dieter.kaschel@nasheng.com. The deadline for receipt of submissions is September 7, 2001.

Abitibi-Consolidated announced that given the continued pressure on the economy, the price for standard newsprint will be reduced by US$25 per tonne. The company anticipates that it will continue to take approximately 50 000 tonnes of market-related downtime per month in the third quarter, over and above the already-announced permanent shutdowns.

DRYDEN, ON — In late May, the Dryden pulp and paper mill pleaded guilty to four breaches of the Ontario Workplace Safety and Insurance Act. The mill had been charged with 19 offences under the Act, taking place between 1997 and 1999. Fines totalling $174 000 were levied. Also, $80 000 in contributions to the Workplace Safety and Insurance Board (WSIB) were made to establish programs to promote workplace safety. As a result of the ruling, the Dryden mill, which had won the Safest Mill in Canada Contest (sponsored by PULP & PAPER CANADA) in 1997 and 1998, Class A, has been stripped of the award. Abitibi-Consolidated’s Fort Frances, ON, mill, and Kimberly-Clark’s Terrace Bay, ON, mill, Class A runners-up in 1997 and 1998 respectively, are now recognized as the winners of the contest for those years.