Jul. 13, 2017 - When Irving Pulp and Paper of Saint John, N.B., started up its new continuous pulping operation in March 2016, it was a milestone in the Canadian pulp and paper industry. 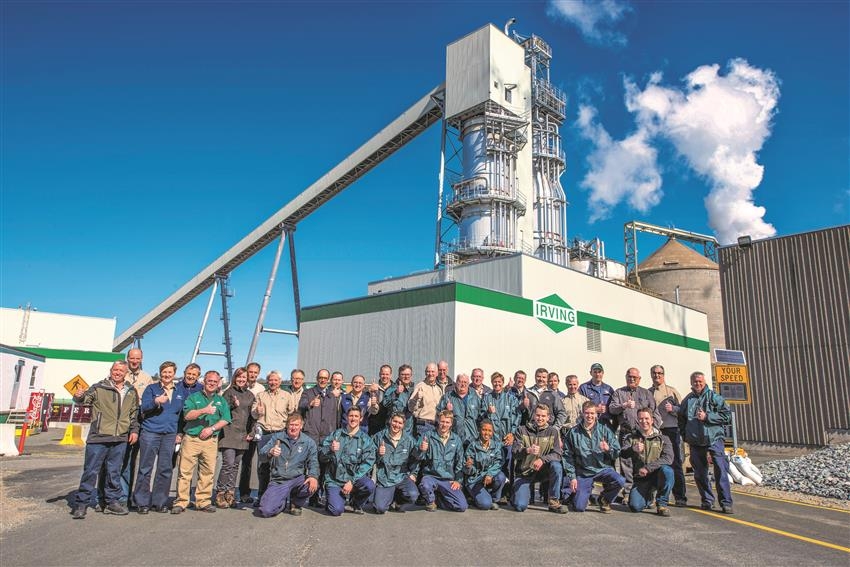 The two-phase modernization project for the bleached kraft pulp mill represented the largest investment in the Canadian pulp and paper industry since 1993. In addition to new chip screening and handling, the new continuous digester pulp line is based on Valmet’s CompactCooking technology which replaced 14 batch digesters. In a second phase following the fibre line startup, a new pulp dryer will replace three existing dryers.

For this major investment, Irving was expecting significant returns based on increased mill capacity now and in the future, higher yield, flexibility of operation for hardwood and softwood pulps, reduced maintenance and operating costs, and improved pulp quality. As outlined in a presentation by Irving’s senior project advisor Jim Brewster, now retired, at Valmet’s recent Customer Days in Sweden, that is exactly what Irving got, and some extra benefits as it turned out. The project was right on schedule and 10 per cent below budget, according to Brewster. The startup was excellent, reaching target production on the third day and running for 75 days continuously after which a recovery boiler washdown was scheduled. Most importantly, the 600,000 man-hour project was completed with only one lost-time accident. Irving Pulp and Paper was the general contractor for the project with Valmet providing valuable pre- and post-installation assistance as team members.

Good team design, operator training
The challenge in the design phase of the digester was to accommodate hardwood and softwood pulp swings, as the hardwood species (birch and maple) are much denser than softwood species (spruce, balsam fir and pine). Therefore, the residence times for hardwood pulp in the digester are considerably longer at the lower cooking temperature characteristic of CompactCooking.

“It was a very good team effort between Valmet and Irving to design the digester for maximum production of softwood yet sized also for the considerably lower hardwood chip flow,” said Brewster. The digester is sized for 1,866 adt/d of softwood pulp.

Operator training was another challenge since the 15 process operators had experience with batch cooking only, but none with continuous cooking. Process simulation and interactive multimedia training provided by Valmet were invaluable ingredients needed to bring the operators up to a high level of proficiency before startup.

Nice and steady operation
Brewster noted that one of the key features of Valmet’s two-vessel digester is the excellent liquor impregnation provided by ImpBin chip impregnation system. It combines the basic features of the traditional chip pre-steaming bin, impregnation vessel and flash system. Impregnation of chips at low temperature for a longer time has proven to be very effective at generating pulps with very low reject content.

Brewster noted, “We had significant problems with high rejects with batch digesters, now we have very few.”

Hemicellulose protection and high pulp yields are achieved as well at the lower temperatures. He said the cross-column uniformity is excellent, with no digester circulation required. Cooking temperatures are dramatically lower than the previous batch digesters, at 140 degrees C for hardwood and 148 degrees C for softwood. “The machinery is very robust and reliable. Everything runs nice and steady,” he concluded.

Expected results, plus more
Although some further optimization continues, Irving Pulp and Paper has achieved the estimated results plus more, and some unexpected side benefits. The mill is able to run at a 50 t/d higher production rate with constant recovery boiler solids loading. A good part of that is higher yield from the digester. Oxygen delignification effectiveness is up 5 to 10 per cent at lower reactor temperatures and there has been a 15 to 20 per cent decrease in chlorine dioxide and caustic soda consumption at the same pulp Kappa number to the bleach plant. Those savings are attributed to an integral pulp washing zone in the digester which reduces black liquor carryover. That lower carryover decreases chemical consumption in downstream delignification and bleaching operations. Even the mill effluent quality is better with BOD down 20 per cent and COD down 12 per cent.

Energy consumption is down as well. The mill electrical load has been reduced by 1.5 MWe. Process steam is down 40 tonnes/hour, which is then diverted to the condensing turbine, saving 80,000 tonnes per year of biomass.

“It has revolutionized the energy system in the mill,” Brewster said.

Softwood pulp strength has improved although there is some further optimization required. Surprisingly, improved runnability on the pulp dryers due to improved drainage properties was an unexpected benefit, with web breaks down 60 per cent. The pulp dryers are no longer a mill limitation.

The expected lower maintenance costs are being realized according to preliminary numbers. The mill-wide costs are down about 10 per cent, although the digester reductions are higher.

In summary, Irving Pulp and Paper is “delighted with the results,” according to Brewster. “We are looking forward to further optimization.”

Mark Williamson is a journalist engineer.

This article previously appeared in the Summer 2017 issue of Pulp & Paper Canada.