The winners of the Skills Awards for Aboriginal Youth were announced yesterday at the Conference Board of Canada’s National Summit on Indigenous Youth and Natural Resource Development in Calgary, Alta., by Forest Products Association of Canada (FPAC) and the Canadian Council of Forest Ministers (CCFM). 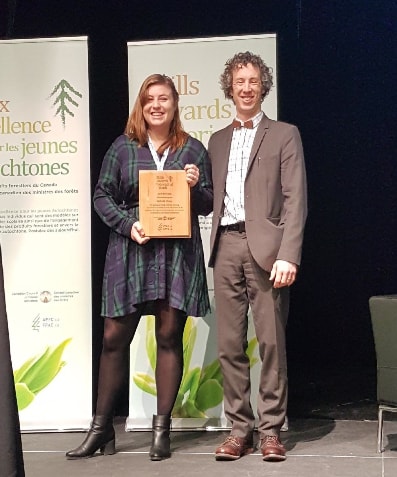 “Ms. Males and Mr. Flood are both exceptional youth working to improve and support their communities and the forest sector,” said Derek Nighbor, FPAC CEO. “The forest sector benefits greatly and relies on the enthusiasm and dedication of Aboriginal youth pursuing careers in the forest sector for its future success.”

Currently pursuing a Masters of Sustainable Forest Management at the University of British Columbia, Males intends on becoming a Registered Professional Forester (RPF). She holds a Bachelor of Science in Environmental Sciences, majoring in Resource management from the University of Guelph. As part of her undergraduate studies, she completed research with the Saugeen Ojibway First Nation Environment Department. Once certified as an RPF, Males intends on working as an Aboriginal Liaison in rural communities in Northern Ontario.

Flood is currently pursuing a Bachelor of Science in Forest Operations with a minor in Commerce at the University of British Columbia. In 2016, he created his own small wood operation business, combining his interest in entrepreneurship and the forest industry. He has previously volunteered with the Temiskaming Native Women’s Support Group and assists his community to plan Pow Wows. Upon graduation, he intends to continue operating his business in the forest sector.

“Both winners have shown strong commitment to their communities, an impressive interest in their fields of study, and should look forward to rewarding careers in Canada’s innovative forest sector,” said Margaret Miller, minister of natural resources for Nova Scotia, and chair of the Canadian Council of Forest Ministers.