An Ontario machine-building firm has developed the SafeBox, which automates lockout/tagout procedures 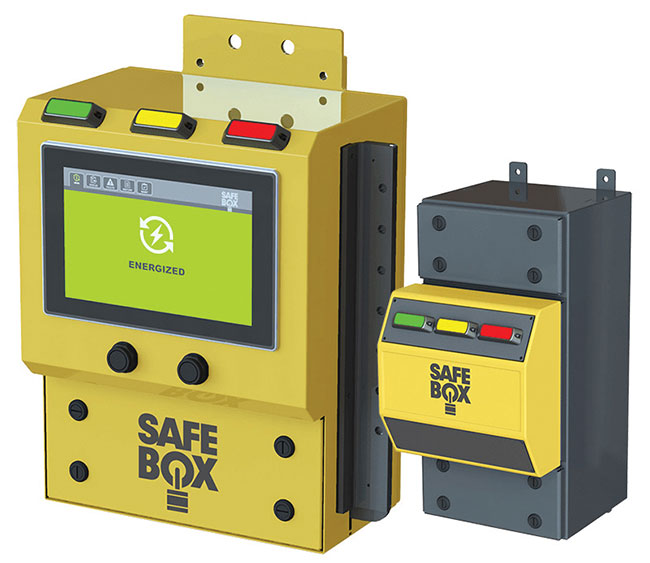 SafeBox is a lockout system for heavy industries that mechanically isolates energy sources from a single lockout point, reducing lockout/tagout time to under two seconds.

“The manual disconnect process still exists –isolation, disengaging contactors, checking the potential energy – all that’s still occurring mechanically, but it’s happening in these pre-engineered boxes,” explains Gabriel Janakaraj, business development manager at Ionic Mechatronics. “If your production system is only operating 45 per cent or 65 per cent of the time, where’s your downtime? Half of that is all lockout/tagout.”

The master control box is equipped with a screen to view vitals, a locking bar under the system’s SIL3 raiting, and “Isolate” (power off) and “Energize” (power on) buttons. The system detects if there are any moving parts in the system – even powered off equipment that is winding down.

The SafeBox system uses the same control standards as a robotic cell and includes continuous fault and zero-energy monitoring, which help to eliminate arc flash and shock hazards, as well as welded contact risk.

Janakaraj says it also helps to mitigate human error. “You rely on this person to go into this room where there are hundreds of disconnects and pull down the correct one,” he says. “With our device, everything is tagged and IDed so you know exactly what you’re locking out. You know who’s locking down at what time, and how long it takes.”

When Ionic Mechatronics began developing the SafeBox system in 2015, they had found there are, on average, around 10 lockout/tagout violations per day across all industries. “And you can just imagine how many near-misses there are that haven’t been recorded or spoken about,” says Janakaraj.

In 2010, Ontario’s Workplace Safety and Insurance Board (WSIB) recorded that lost-time injuries stemming from lockout/tagout were the fourth highest cause of occupational injuries, and that lockout injuries were often more severe than many other types of workplace injuries.

“The big gain outside of safety is return on investment,” Janakaraj says. Half of the 10 case studies Ionic Mechatronics has completed across various industries show an ROI of less than a year.

Janakaraj says that while workers at times have been resistant to the idea of a new lockout/tagout procedure, they quickly realize the increased safety benefits once they get accustomed to the new system.

In a lumber mill application, where profit is calculated on price per inch of wood, Janakaraj says doing a lockout procedure of 15 minutes, 20 to 30 times a day adds up to significant lost production time. “Any kind of production-integral system that requires lockout/tagout – a lot of that downtime can be capitalized on.”

The SafeBox has been recognized as an energy isolation system by the Ontario Ministry of Labour, and Ionic Mechatronics is currently working on meeting regulations in other provinces and countries. The company, which started commercially marketing SafeBox in October 2019, is now quoting larger installations with more complex disconnects, and developing a mobile app for remote monitoring.