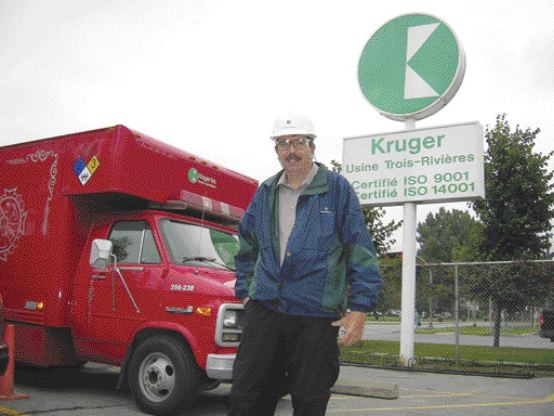 Three generations of the Kruger family being at the helm have made the Kruger organization one of the few family-controlled companies in the Canadian pulp and paper industry. Synonymous with productivity and innovation, the Kruger name, recognized…

Three generations of the Kruger family being at the helm have made the Kruger organization one of the few family-controlled companies in the Canadian pulp and paper industry. Synonymous with productivity and innovation, the Kruger name, recognized by its stylized green letter “K” logo, has come to represent employment to over 10,000 people in Canada, the U.S. and abroad. Since 1904 when Joseph Kruger first established a fine paper business in Montreal, the company policy has been to anticipate and meet the needs of its customers. After a century of operation, these customers are spread world-wide, and the Kruger organization offers an array of diverse products that would definitely make founder Joseph Kruger proud.

Gene H. Kruger, son of the founder, became president in 1927 and initiated expansion into the manufacturing of newsprint, paperboard and tissue. Joseph Kruger II, Gene’s son, has been the chairman of the board and CEO for the last 20 years. During this latter period, he initiated expansion into forest and wood products, specialty publication papers, tissue manufacturing, power plants, recycling and modernization. Expansion projects are aimed at ensuring continuous quality upgrading to meet the ever-expanding range of customer needs. This objective is achieved in the ‘Kruger way’, which respects the social and economic environments of the communities where the operations are located. While Kruger is huge in size and spread around the world, playing a role as a corporate citizen in the community has always been a significant concern. The company’s annual paper production exceeds 2.2 million metric tonnes.

The Trois-Rivires mill, acquired by Kruger in 1973, has been under continuous expansion. Production averages 1870 metric tonnes of paper per day, which is divided into 55% newsprint, 25% coated paper, and 20% specialty grades. A certain percentage of deinked pulp is added to the 100% TMP furnish, as required by particular customers. This is a large operation, and it is only from the air that one can get a true impression of the size of the mill, that extends over 100 acres of land on the banks of the St. Lawrence River. Trois-Rivires is a year-round all-weather port, that also offers easy access to markets world-wide.

With seven paper machines, two coaters and seven supercalenders, this Kruger facility produces all of its newsprint on twin-wire formers. The start-up of the PM 10 at the end of 1990 improved newsprint quality. Running at speeds of more than 400 feet per minute, this 300 trim machine produces 205,000 metric tonnes of newsprint a year. In the field of value-added products, the two coaters at the Trois-Rivires mill produce coated paper for magazines and advertising material. Supercalendered grades (groundwood specialty papers) account for 125,000 tonnes of production yearly, mainly destined for the Canadian and American markets. The three Kleinewefers supercalenders are each equipped with 12 rolls and operate at a speed of 2500 feet per minute.

“It is almost like running three different businesses all under one big roof,” said Stphane Rousseau, vice president and general manager of the mill. This is the largest mill operation east of the Rockies and, when he joined the operation in August 2002, Rousseau had large shoes to fill. In the past 25 years there have been only four other general managers at this Kruger facility.

Forty-three year-old Rousseau is a chemical engineer who has devoted his career to the pulp and paper industry. Since graduating from cole Poltechnique in Montreal, he has worked in La Tuque, Matane, Montreal, and now Trois-Rivires.

“There was a time when my family and I moved seven times over a ten-year period” reminisced Rousseau, “and I always thank my wife for keeping our young family stable.” Now settled in Trois-Rivires, Rousseau is enthusiastic about the unique challenges that his job offers on a daily basis. “When I was in Matane, I worked with 150 different people, so daily contact was relatively easy. Now it is over one thousand, and I am most proud of the fact that I know 100% of the faces of all the employees, and I am equally proud of knowing 75% by name.” This is not an easy task, but Rousseau spends many hours visiting the various operations within the mill.

Louis Sabourin, senior vice-president publication papers, referred to Rousseau as “a talented young man whose management style is respected throughout the mill.” Rolland Gurin, manager of technical services, has been involved with the paper industry for 25 years, concurred and added, “his skill as a manager involves always demanding continuous improvement, and what is special about him is that he never forgets to recognize employees who achieved special goals.”

Throughout the mill operation, there is the unanimous opinion that Rousseau’s managerial style, based on listening, initiating, motivating and encouraging has had an extremely positive effect on the operation in the past two years. Rousseau said, “I am never satisfied with myself, and I believe that there is always a new challenge that I, as the mill manager have to present to the employees.” He achieves this by creating an environment that is always developing and open to new ways of doing things. “I believe in trusting people and making them responsible, and in this way everybody becomes a leader in the area they know best.”

While the concept sounds logical, to apply it to a large operation such as the one in Trois-Rivires requires a special individual. Stphane is that person. His personality is open and aggressively friendly, making him very approachable. “With his personal qualities and strong leadership, Stphane can certainly assume the continuity of the Trois-Rivires mill’s success. (His) philosophy fits quite well with Kruger’s, which is focused on results and where a sense of partnership is highly valued,” said Gilles Dontigny, vice-president manufacturing at the Trois-Rivires mill & Kruger Wayagamack mill.

At the end of the day, Stphane is a happy man who revels in being a father to 15 year-old Julie and 12 year-old Phillippe. He makes time for at least one academic course every year, and as he put it, “I am always interested in meeting people from other fields and learning about their management styles.” He is also very proud of the success of the mill’s revitalized Social Committee, which allows employees and their families to organize and share events together as a unit. “When employees talk to each other, you would be surprised what can be achieved!”