News
Leading through a crisis 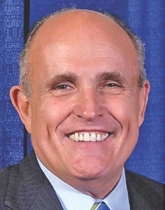 “You have to understand who and what you are,” Giuliani says. He gives as examples former President Ronald Reagan nd Martin Luther King Jr. Both developed their values over time and performed consistently as leaders. Based on personal beliefs – social, political or religious – leaders draw strength from core values to remain calm in a crisis. When there isn’t time to reflect and ponder a way forward, you have to rely on your consistent beliefs and values to guide you. “You can’t reflect,” he says, “you have to act.”

Not the Pollyanna view. Giuliani’s optimism refers to the ability to solve problems with a positive approach. “People follow solutions,” he says. “If I said to you ‘Things are very, very bad and they’re going to get worse … follow me,’ would you?”

For Congressional Medal of Honour winners in times of war, firefighters who enter burning buildings, astronauts who risk their lives in pursuit of human knowledge, courage is a common denominator. “Courage isn’t the absence of fear,” Giuliani says, “It’s the ability to overcome it and do what you have to do.”

Training ahead of crises helps leaders perform. Giuliani offers as an example the New York policeman who jumped into the icy East River to save someone from drowning, and then could barely make it through a subsequent news conference recounting the event. The officer was trained to serve and help people, he says, not to conduct press conferences.

Being put in charge of any group of people can lead to delusions of grandeur. Leaders must fight the urge to bask in their power and instead build a core team of skilled individuals and rely on them. “You have to say to yourself, ‘I have strengths and weaknesses and I know I’m going to need help’ when running any type of organization.”

The ability to communicate ideas and decisions during a crisis draws from all the qualities above. “You have to be able to communicate at all levels, then what you’re doing is speaking to people,” he says, as opposed to ordering them. In the end, leaders have to be present in times of crisis, be they national or personal in scale. Support of others will be returned. “Then if you face a crisis you’re going to get more out of people than you ever realized.”