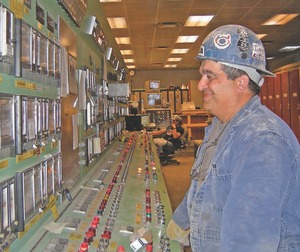 TERRACE BAY, ONT. — Some people believed it would never reopen. But they were wrong. Terrace Bay Pulp is back in business, a fact celebrated at a grand re-opening the afternoon of Oct. 4 as a forklif…

TERRACE BAY, ONT. — Some people believed it would never reopen. But they were wrong. Terrace Bay Pulp is back in business, a fact celebrated at a grand re-opening the afternoon of Oct. 4 as a forklift brought bales of fresh-made pulp into the operation’s giant warehouse. The mill has restarted only one line, with a capacity of 350,000 tonnes/year, producing northern bleached softwood kraft (NBSK) pulp.

“The mill is in good shape, so it’s time to rock ‘n’ roll and make some pulp,” mill manager Bob Bryson shouted out to a crowd of workers, company officials, retirees and local politicians. Bryson has worked at the mill for more than three decades.

The upbeat ceremony capped a grinding and often emotional effort to get the 62-year-old plant back on line 19 months after it sought court protection from its creditors while it restructured and paid off about $80 million in debt.

The frustration and angst took hold in February of this year, when a tight credit market was blamed for stalling the company’s restructuring plans and forcing it to postpone a planned restart. In May, another bump in the road resulted in the restart being put off once again.

With summer nearly over and a second lender having backed out of the plan to get Terrace Bay Pulp (TBP) back on line, the company hooked up with a little-known Toronto-based lender — Callidus Capital Corp. Experienced in rescuing cash-strapped companies that still look good on paper, Callidus agreed to provide Terrace Bay Pulp with $30 million.

With the $25 million TBP already had promised from the province, the green light went on and 350 workers — many of whom had run out of employment insurance and had become regulars at food banks — prepared to re-enter the inside of a mill they hadn’t seen for nearly two years. On Sept. 24, a tiny window that offers a peek into the mill boiler turned red-hot orange. The plant was being fired up. Steam billowed out of the stack, and the roughly 2,000 people who live in Terrace Bay and nearby Schreiber let out a collective sigh of relief.

“Nothing can beat the sight of coming down here again, and seeing smoke coming out of the stack,” remarked Ontario’s Northern Development, Mines and Forestry Minister, Michael Gravelle, who called the plant’s re-opening “the highlight of my political career.” Many workers who had spent the last two years making ends meet by commuting to contract jobs as far away as British Columbia couldn’t agree more.

“I’m happy for our town, and it’s just nice to be able to come home at night and see my two daughters,” said TBP boiler operator Jim Fournier, 39.

Terrace Bay Pulp founder Ken Buchanan Sr. paid tribute to Callidus president Sam Fleiser, who was among the crowd. “Sam worked diligently to help us get where we are today,” Buchanan said. “He helped lift this mill off the ground.”

Four years ago it was Buchanan himself who was seen as the saviour, after his company took over the Terrace Bay mill from former owner Georgia-based Neenah Paper, which was making plans to scrap it. At the celebration, Buchanan quipped: “This is the second opening we’ve had, and I hope it’s the last. It’s been a very hard grind to get where we are.”

Traditionally, Terrace Bay’s pulp has gone mostly into the U.S. -to the other side of Lake Superior, as locals like to say. That’s expected to change, with the company’s sales team seeking new customers overseas.