News
Looking West: Historical Overview of the Industry in BC 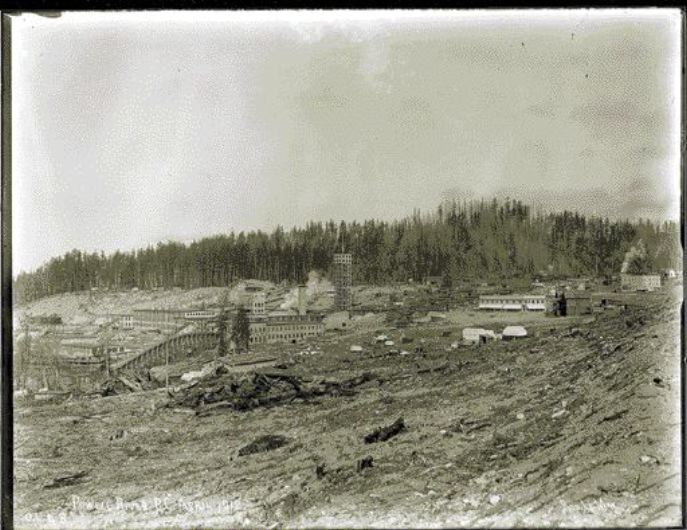 This article is an addendum to the historical review of the industry in eastern Canada which was presented in the May 2003 issue of this magazine. The industry in eastern Canada was built on the production of newsprint in the first half of the 20th century. The industry in British Columbia and in western Canada has been built largely on kraft pulping of sawmill waste, in the second half of the century. There are very few suitable water-power sites on the BC coast, and the development of the industry largely had to wait for the availability of electrical power at any location.

The postwar expansion of newsprint on the West Coast also had to wait for groundwood brightening technology and the availability of semi-bleached kraft pulp.

In 1945, there were only five mills on the coast, accessible only by water, and none in the interior. Newsprint was made at Powell River and Ocean Falls, bleached pulp at Port Alice and Woodfibre and unbleached pulp at Port Mellon. All of these locations were remote, accessible only by water, and none were connected to the power grid. In fact there was not really a power grid until the 1950s.

Except for the Fraser River, which has always been off limits, and the Skeena, which is a wide estuary, there are no long rivers which could provide the steady flow required for power. The drainage pattern of the coast and Vancouver Island is a series of short rivers with little hydro energy potential. With seasonal rainfall patterns, storage is required, in the form of snowpack or natural or man-made lakes.

Only four sites were ever developed on the coast for the power to run grinders: at Ocean Falls, Powell River (two systems) and Campbell River on Vancouver Island.

Link Lake at Ocean Falls provided all the hydro power there ever was at that site, not enough to support 300 tpd of groundwood. The catchment area of Link Lake is quite small, with no opportunity to extend it to adjacent rivers systems. Being farther inland, Link Lake also has a tendency to freeze up during January. Ocean Falls was never connected to the grid, which was a major reason for its ultimate abandonment.

The Powell Lake catchment area provided the power for direct-driven grinders for the original four-machine Powell River mill, producing about 350 tpd. In the 1920s, a second watershed was developed for Powell River, based on a system of rivers feeding into Lois Lake, about 20 km from the mill. This was captured as hydroelectric power and used for electric grinders for, eventually, four more machines. It was not until the 1950s that Powell River was connected to the grid, by overhead wires over Jervis Inlet, a notable engineering feat at the time. It took even longer to get rid of the 50 cycle motors which had been installed in the original isolated mill.

The Campbell/Buttle Lake system on Vancouver Island was not developed until 1952, in part to provide power to the original Elk Falls mill at Campbell River.

The first wood pulp mill in BC was at a place called Swanson Bay, operated by BC Pulp Company, which subsequently built Woodfibre and Port Alice. It presumably would have been the only mill running in 1903. It was located about halfway between Ocean Falls and Kitimat, on the mainland coast. The date and process are lost in the mists of time. Local folklore says it was abandoned when Port Alice was built in 1918 or so.

Port Mellon, in Howe Sound, started up in 1908, and had an uneven history. When Canfor (the present owner) took it over in 1950, it was a 160 tpd unbleached pulp mill, presumably either soda or kraft.

Ocean Falls started up in 1911 as a market groundwood mill. Two newsprint machines were added in 1917. Eventually the mill had both kraft and sulphite pulping and four more machines making liner, tissue and pulp.

Woodfibre started up in 1912. It was shut down in 1954 and then reopened in 1958 as a kraft mill. Some of the sulphite digesters are still there, lying on their sides as liquor tanks.

Powell River started up in 1913 with two newsprint machines, adding two in 1917. After Lois Lake was dammed in the 1920s, four more machines were added.

Port Alice was, and still is, a dissolving pulp sulphite mill. It was built in about 1918, right after the construction of the mill at Temiscaming, QC, and apparently to the same plans. The legend is that a disgruntled construction manager was passed over for the mill job he wanted there, so he brought the plans west. Both an island facing the Port Alice mill wharf and a street back in Temiscaming share his name.

The construction of the Port Alberni mill of Bloedel, Stewart and Welsh in 1946 was a seminal event in several ways. It was the start of the kraft revolution, the first BC mill to integrate sawmill residuals, and the first project of H.A. Simons. It was a 250 tpd unbleached chemical pulp mill. The federal ministry of fisheries mandated that the process to be kraft rather than sulphite. One result of this was that when, in 1957, two newsprint machines were installed, the paper runnability was so much in excess of that achievable by Powell River that the two companies eventually merged and Powell River was quickly supplied with kraft pulp from Harmac. Legend has it that Prentice Bloedel asked a contractor in Chicago named Simons to build a mill similar to those in Everett and Tacoma. Simons replied that he was too old to start a new venture, but maybe he could stake his son Hal to do it, and so the H.A. Simons organization was born.

On the other hand, Columbia Cellulose did receive permission to build a sulphite mill in Prince Rupert in 1948. This mill upset the marketing picture for dissolving pulps, because Celanese dropped the prices in order to have profits show on the books of the parent company in the U.S. Later forgetting what they had done, they abandoned the mill as unprofitable — the first step in the saga of Skeena which continues to this day.

The next seminal event was the Harmac mill of H.R. MacMillan Export Company which started producing fully-bleached kraft in 1950. In 1945, it was believed that kraft pulp from the West Coast species was not bleachable. In order to compete with the success of Bloedel in Port Alberni, MacMillan bought a bleach plant process, including chlorine dioxide, from Modo in Sweden. Bleaching was an eight-stage process: CEHEHDED. The ClO2 process was Holst, best described as a batch Mathieson process, later easily converted to standard Mathieson.

The capital cost of the first line at Harmac was $17 million and the profit of $7 million per year came from upgrading the value of sawmill waste which would otherwise have been burned. This meant that when the mill was twinned in 1953, the original investment had already been paid off. By that time, the Bloedel and MacMillan companies had merged.

As late as 1965, management seemed to pay undue attention to the cost of chemicals compared to the cost of wood. Historically, this made sense if one extrapolated the costs back to 1950. At that time, wood had been free, while electrical power was virtually free on a 25-year incentive. Labour was inexpensive, because the workers were drawn from a pool of unemployed coal miners. The highest costs were chlorate and chloralkali.

Even without Harmac, chlorine dioxide bleaching would eventually have developed on the west coast. Ten years after its inception there, Erco had consolidated the process and it was standard technology. Chlorine dioxide was being used at that time at Hawkesbury, (a former mill in Ontario) and Temiscaming, QC, in secret, as well as two mills in the US, but was still not in general use. St. Regis, which introduced the Kamyr digester to North America at Hinton in 1957, would surely have used it even if Harmac did not exist. Nevertheless, Harmac was the trigger for the explosion of kraft pulping on the coast and t
hen in the interior.

The first phase of expansion came about in 1955 to 1960. Crofton, Elk Falls, Hinton and Celgar started up kraft mills, Port Alberni added an SBK line with semi-bleaching to support its newsprint machines.

The third wave, the development of the BC interior came in 1965 to 1975 and overflowed onto the prairies. Kraft mills were built in Kamloops, Prince George, Cranbrook, Quesnel, Grande Prairie, Prince Albert, Mackenzie and The Pas. Amazingly, of all the giants on the coast, only Canfor and, later, BCFP had the foresight to invest in the interior, and Canfor is the only one to survive as such today.

In terms of newsprint, the Elk Falls mill at Campbell River started up with one newsprint machine in 1952. Subsequent newsprint projects on Vancouver Island required access to the mainland power grid, which came in the 1950s with an underwater tie line. MacMillan-Bloedel made the first big step with two newsprint machines in Port Alberni in 1957. A brown paper machine was also included in the project, which was very audacious for a 250 tpd unbleached mill.

In 1964, Crofton added newsprint, hiring expertise away from the existing mills. The mill featured slightly more grinder capacity and longer wire tables, which gave them the capability to pick and choose their market, and caused continuing envy in MacBlo.

To complete the saga of newsprint, the advent of TMP in the 1970s vastly increased the potential to develop the strength of mechanical pulp, and the twin wire machines in the 1980s gave the capability to use that strength. At the time TMP was justified on some rather specious considerations, but the real incentive was the ability to use sawmill residues, thus greatly expanding the fibre resource available for newsprint. In fact since that time the kraft mills at Port Alberni and Powell River have been shut down and fibre has been diverted from kraft pulp to TMP.

The key to TMP technology was to concentrate on the treatment of screen rejects and the biggest hurdle in that was convincing people who grew up with grinders that this was different than refining to hide the rejects. It was necessary to introduce the concept of single-fibre shives. One calculation showed that the tonnage of lint from paper was the same as the tonnage of TMP screen rejects.

A whole history could still be written on the technology and politics of the development of TMP and all its variations. This article only briefly touches on the history of the beginnings of the pulp and paper industry in British Columbia but shows how the production of pulp and paper differed in the west from the east to make the industry the important economical force in Canada that it is today.

Doug Christie is a process engineer, semi-retired from the industry. He graduated from University of Toronto 49 years ago, in chemical engineering and has worked in mills in Quebec and BC, and as a consultant in Canada, USA, France, and Southeast Asia. He can be reached at christie@mars.ark.com