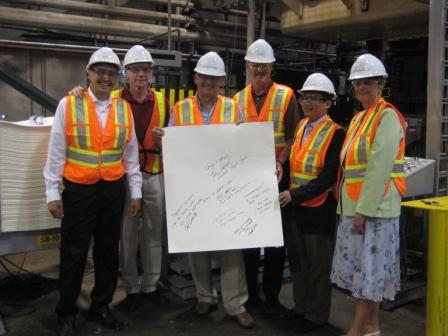 Celebrating the re-opening of the Mackenzie pulp mill are: Chief Derek Orr

Paper Excellence B.V. celebrated the official re-opening of the Mackenzie Pulp Mill in Mackenzie, B.C. on Aug. 17. More than 220 workers have been brought back to work to support the re-opening of the mill and an estimated 500 spin-off jobs will be created.
“I would like to thank Paper Excellence for their valuable investment in the community of Mackenzie, the Omineca region and the province of British Columbia,” said B.C. Premier Gordon Campbell. “I also want to thank Minister Pat Bell, the McLeod Lake Indian Band, the entire community and all partners for working together to ensure working families in this region have an opportunity to build a future right here in Northern British Columbia.”
Located in the Northern Interior Rocky Mountain Trench and strategically centered in the “fibre basket” of the B.C. interior, the Mackenzie Mill operates at a total capacity of over 235,000 tonnes per year. The unique characteristics of the fiber resources within the region make Mackenzie pulp one of the brightest, cleanest, and strongest pulps in the world.
“Our land is full of precious resources, so we are willing to endorse companies that have the expertise, commitment and willingness to work with us to manage our resources in an environmentally sound manner,” says Chief Derek Orr of the McLeod Lake Indian Band. “I look forward to working with Mackenzie Pulp Mill and exploring other opportunities that will benefit the McLeod Lake Indian Band, local communities and the province.”
The Mackenzie mill was built in 1972 and was significantly modernized in 1996 with the addition of short fiber softwood digesting production capabilities.
It had been shut down for two years prior to being purchased by Paper Excellence earlier this year.