There are many first-of-their-kind technologies being implemented by the Canadian forest products industry on its journey to transformation. 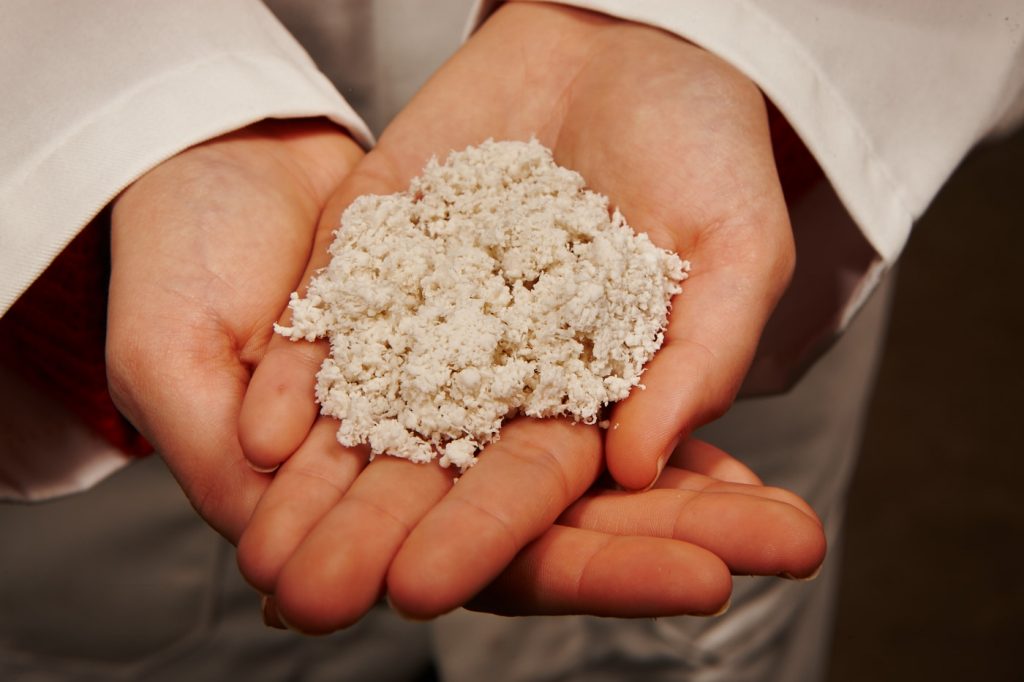 A handful of cellulose filaments.

And with that technological leadership comes a certain element of risk. Several Canadian bioproducts are flirting with commercial success, while others have not reached their expected potential.

Mixed results for biogas
After several years of operation, Alberta-Pacific Forest Industries’ project to manufacture and sell bio-based methanol produced from stripper off-gas has achieved only limited success. Jamie Percy, Al-Pac’s technical business unit leader, updated participants at PacWest 2015 on the status of the venture, which was intended to produce 11 tonnes/day of IMPCA-grade methanol for external sale and internal use within the mill’s processes. So far, said Percy, Al-Pac has not achieved the IMPCA specification, which is an international specification for the methanol market.
The methanol production unit operated for about 340 days during the period from August 2012 to May 2015. It is currently achieving about 6 t/d of production, she said, but the product is off-spec so it is being sent to the lime kiln. Al-Pac has achieved purity of 99.85% by weight, but the main problem is the sulphur content, explained Percy. The specification demanded for sulphur is less than 0.5 ppm, but Al-Pac’s lowest consistent result has been about 60-70 ppm. The mill has run several trials to solve the problem, including caustic addition upstream of the rectification column, sulphuric acid addition, and reverse osmosis.
A different sort of biogas project at Slave Lake Pulp is performing as expected. The mill is generating methane-rich biogas by anaerobic digestion to generate green energy. The anaerobic reactor had been operating for about half a year, and was handling about 85% of the mill’s wastewater flow when Shannon Fehr and Peter McCarthy provided an update at PacWest in May. This is Canada’s first low-rate anaerobic BVF® reactor treating pulp and paper wastewater.
Fehr is the engineering superintendent at West Fraser’s Slave Lake BCTMP mill, and McCarthy represents ADI Systems, the supplier of the anaerobic digestion system.
The biomethanation project converts COD to methane-rich biogas, which is then cleaned and transferred to reciprocating engine generators for the production of up to 8 MW of electricity. The reduced load to the activated sludge system results in lower nutrient use, sludge generation and electricity consumption, the authors report in “Slave Lake Pulp Biomethanation with Power Generation Project.”
At the time of the conference, the biogas scrubber component of the system had not yet been installed, but Slave Lake Pulp was already seeing benefits from anaerobically pre-treating mill wastewater. The mill experienced better overall wastewater treatment process stability. Variations in the organic load discharged to the conventional activated sludge (CAS) system have been mitigated since the start-up of the anaerobic reactor.
As a result of the reduced organic load sent to the CAS, two of the four aeration basins at the mill have been decommissioned. The existing CAS system was an energy-intensive process, and once wastewater flow to the BVF® reactor was increased to 85%, there was a 43% savings in energy use by CAS aeration and new wastewater treatment equipment.
As well, the lower sludge growth rate in an anaerobic environment results in lower nutrient requirements. Slave Lake Pulp has lowered its chemical usage for the reactor and CAS system by 50-75%.

West Fraser bets on lignin
One Canadian pulp mill has chosen to pursue lignin as a co-product, while another has declined the opportunity. West Fraser is installing Canada’s first commercial-scale lignin extraction system at its Hinton pulp mill in Alberta, using the LignoForce technology developed by FPInnovations and Noram Engineering. Resolute Forest Products, which housed the demonstration plant for the LignoForce technology at its Thunder Bay mill, has opted not to pursue commercial-scale production at this time.
Hinton will house a 30 t/d lignin recovery plant. The LignoForce process recovers lignin from kraft black liquor that would otherwise be burned for its heating value.
There will be no full-scale lignin recovery plant at Resolute’s Thunder Bay mill, vice-president Robert Dufresne said at PacWest earlier this year. The mill has housed a demonstration-scale lignin removal project for several years.
“The lignin value does not justify investment in a larger project,” he said. He explained that part of the reason for putting the project on hold is the softwood/hardwood mix of the mill’s fibre supply.

A new player: sugars
The newest Canadian project on the bioproducts scene is Cascades’ venture into wood-based sugars. The company’s Norampac-Cabano mill in Témiscouata-sur-le-Lac, Que., will be the first mill in Canada to implement a technology that uses hot water to extract hemicellulose from hardwood chips. The project will replace the existing soda-based chemical pulping process with a more environmentally friendly one.
Through this new process, hemicellulose will be extracted from wood chips. The hemicellulose stream can be used to make a number of products ranging from biofuels to a zero-calorie sweetener, reports Cascades. In addition to extracting hemicellulose, the new process will allow the facility to continue its current production of traditional corrugated paperboard product.
Therein lies the crux of the wood-based bioproducts industry in Canada: all of these projects are reliant on the core pulp and paper business. They may be achieving success, but they are not suited to independence.
(A longer version of this article appeared in the September/October issue of Pulp & Paper Canada, which you can read here.)