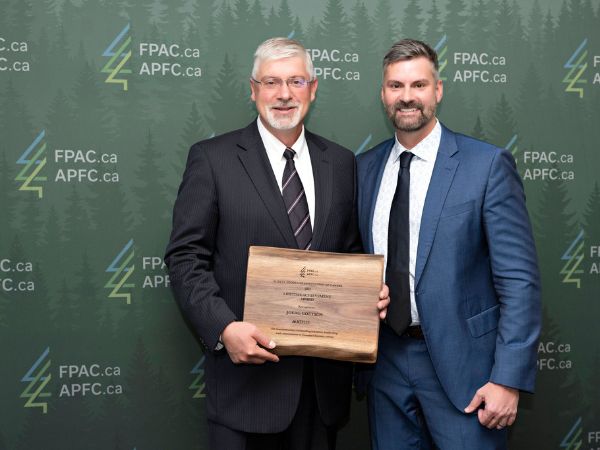 The Forest Products Association of Canada (FPAC) recognized Mercer International’s Joerg Goetsch with a Lifetime Achievement Award. FPAC presents this award to those who have been committed to the forestry sector during their careers and are invaluable for their long-time engagement, support and advocation.

Part of Mercer’s Vancouver team, Goetsch deserves to be celebrated for his support and outstanding work, according to Mercer.

Retired from the corporate team this past May as Mercer’s director of strategic initiatives for Western Canada, Goetsch’s forestry roots run deep in the Peace region of Alberta. After completing his first diploma with the Northern Alberta Institute of Technology (NAIT), he worked with the Alberta Forest Service in Fort Chipewyan as an Aerial Observer for forest fires. This launched his forestry career, opening the opportunity to become a forest officer in training. The training brought him to High Prairie Forest Products, managing different contracts there until he was approached by the Government of Alberta in 1989 to work as a forest officer based in Manning.

Goetsch oversaw the activities of Daishowa-Marubeni International Ltd. (DMI) – now known as Mercer Peace River (MPR) – within their Forest Management Area. He was approached to join DMI’s team in 1992. In a few short years, he became the  planning superintendent. With this new title Goetsch was expected to become a registered forester.

“I completed my Bachelor’s in Forestry, mostly through correspondence and some condensed summer courses,” Goetsch explained, “I was the first forester graduate at the time to complete the syllabus program requirements of the now-called Association of Alberta Forest Management Professionals through this alternate pathway.”

In 2005, Goetschwas promoted to woodlands manager, where he used his knowledge gained as a planning superintendent to grow in his ability to engage with external stakeholders, industry associations and Indigenous groups.

In 2010, however, Goetsch sought out a shift to production manager. Relying on the team he led to also mentor him established a different relationship than had been seen within that environment before.

Through his studies to coincide with the woodlands manager role and with his focus once again on the external, Goetsch saw an opportunity to build external relationships through the bioeconomy.

Goetsch served on numerous industry and government boards, including Alberta Innovates, for six years representing Alberta’s forestry interests. In 2013, Joerg became involved at the corporate level of the business, growing in external and government affairs to look at diversity, human resources, policies and procedures.

In 2015 Joerg also took on the role of president and a member of the board of directors for Peace River Logging (PRL). The role was rewarding and challenging, as it sought to balance the needs and relationships between PRL, the mill’s Woodlands and the production departments.

“This became complicated at times,” Joerg admitted but is a position he held for seven years throughout Mercer’s acquisition and up until retirement. His time in the position included meetings in Vancouver and Edmonton with five First Nations. As their traditional lands provide Mercer with the fibre they need to operate, these gatherings are paramount to strengthening the company’s relationships and determining what it wants to build for a future, together.

“With Mercer, I’ve found that, if you express a strong desire and confidence, you’re encouraged to find the results,” said Goetsch. “Going into forestry, I never thought I would end up in government relations or HR,” he reflects, “You go into your field of passion, but you can end up in different – yet related – fields.”