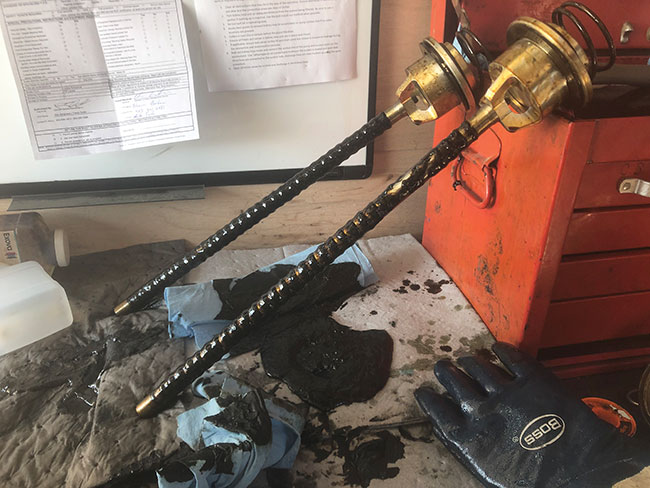 Aaron Chambers, CLS, the condition-based monitoring (CBM) coordinator at the Whitecourt mill, says that in September 2018, his team discovered the slab press’s hydraulic system had electrostatic discharge occurring as it filtered oil through a machine-mounted kidney loop.

“When the Millar Western maintenance team took the oil canister lid off, the filtered oil on the inside of the filter was blacker than the upstream – non-filtered – oil around it,” Chambers says. “So, we were going through filters very, very quickly.”

The cost to replace the oil altogether would have been approximately $28,000.

The mill’s mechanical maintenance superintendent was chatting about the issue to a friend, who said that Rotor-Tech – the company he worked for – might have a solution for the problem.

Rotor-Tech, a U.S.-based distributor with Canadian operations in Red Deer, Alberta, had been selling rotary-gear pumps for glycol gas dehydration systems primarily to the oil and gas sector before adding filtration services about four years ago to help preserve the life of its equipment.

The company has since started servicing several other process-based industries, including pulp and paper, with filtration systems including both permanent kidney loops and mobile units. 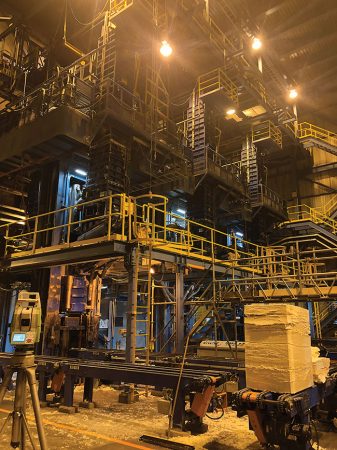 “We decided that, since we’d be facing a big cost for changing the oil out, it made sense to give Rotor-Tech a go, to see if they could get rid of some of the soot in the oil that was being created by this discharging,” says Chambers.

At the time they made the decision to go ahead, the Whitecourt mill was on a maintenance shutdown. Glenn Gorham, operations lead at Rotor-Tech, arrived in April 2019 with a mobile kidney loop system containing six stages of both magnetic and conventional filtration.

The unit, mounted on a trailer, is small enough to get inside the mill, with 50 feet of hoses to allow access to hard-to-reach areas.

Rotor-Tech has assembled its own mobile unit using magnetic filters from One Eye Industries in Calgary. A standard filter “restricts your flow, and it stops a certain size of particulate from going through,” explains George Bachul, general manager at Rotor-Tech.

“With a magnetic filter, it actually pulls the particulates out of the fluid, as opposed to stopping it from passing through. That’s how you get sub-micron filtration without any flow restrictions.”

On the first visit to the Whitecourt mill, the Rotor-Tech system removed about 95 per cent of the particulates from the oil.

“It was quite successful, despite the fact that the internal system hadn’t yet been corrected,” says Chambers. “We have since changed to another style of filter to eliminate the issue, and all has been good since.”

In early February 2020, the Millar Western maintenance team discovered that a component on the hydraulic system had failed. After changing parts on the system to rectify the issue, metal particles were discovered in the oil. It was cleaner than before the first mobile filtration, but still not at the mill’s set ISO levels.

Rotor-Tech returned at that time to do another pass. Gorham circulated 3,600 litres of oil through the mobile filtration unit for eight hours, with the total cost to the mill being about $2,800 – and since the filtration occurred while the slab press was running, there was no downtime or lost production. The system’s scrubber and dual-stage magnetic filters picked up the fine metal shavings.

Chambers used Millar Western’s in-house LNF (laser particle counter) to analyze the second-round results. Under ISO 4406 fluid cleanliness standards, which measure particulates per one millilitre, there was an average of 98 per cent less particulates across the 4, 6 and 14µm measurements eight hours after the filtration system had been deployed, compared to a sample from earlier that same day, before the system had been used.

“We started off in a better spot the second time, so the bottom line in our ISO cleanliness was far better than the first time,” says Chambers.

The maintenance team always completes an oil analysis every month to ensure the systems are working properly, and Chambers gets a high-performance test for foam tendency every three months for the larger-capacity oil systems.

Chambers says with the new hydraulic motor components and the new filter in place, the Whitecourt mill shouldn’t need to use the Rotor-Tech mobile filtration unit on the slab press again – but that there are still opportunities to deploy it in other areas of the mill where oil is used, especially because it allows for online filtration with no shutdown required.

Since the filtration occurred while the slab press was running, there was no downtime or additional lost production.

“When our online filtering systems can’t handle what’s going on with the system due to outside influences, then that’s when we would get them back to do extra filtering,” he says.

He points out that there are also environmental benefits to not needing to dispose of used oil. “If the oil is in good shape, there is no need to change it,” he says.

Millar Western uses about 15 filter carts to process the five types of oil used at the mill. Anything that fails the cleanliness count is re-filtered until it’s at an acceptable level. All equipment on site is sampled at regular intervals.

“We try to keep oil changes down to an absolute minimum,” Chambers says. “Cleaning instead of replacing oil saves us a big expense –and it contributes to the continuous improvement of our environmental performance.”

This article originally appeared in the Summer 2020 issue of Pulp & Paper Canada.