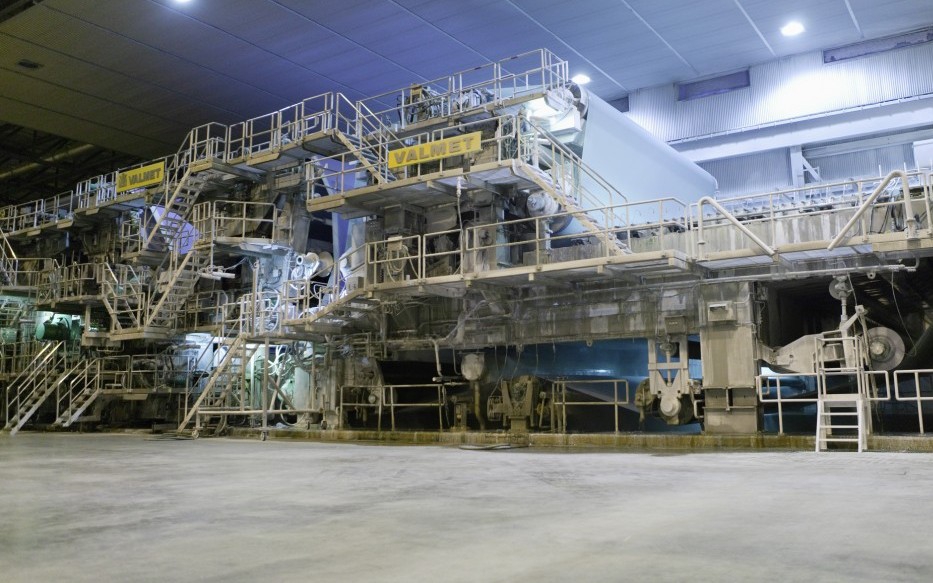 Moody's outlook for the paper sub-sector remains negative. Shown above is the paper machine at Domtar's Bennettsville mill.

The outlook for the global paper and forest products industry is stable, says Moody’s Investors Service. The ratings agency’s outlook reflects expectations that the consolidated operating income of the 46 paper and forest product companies that Moody’s rates globally will increase by zero to two per cent over the next 12-18 months.

Moody’s expects that the consolidated operating income of the 28 North American companies it rates will remain essentially flat, with zero to two per cent growth over the outlook period. These companies account for about 60 per cent of the global rated industry’s operating income. Flat to modest operating income growth from paper packaging, pulp, wood products and timberland producers will be offset by lower operating earnings from paper companies. Within this group, the eight North American timberland and wood products companies, such as Rayonier Inc., West Fraser Timber Co. Ltd. and Norbord Inc., will benefit as the demand for new US housing increases about 10 per cent in 2016.

“Outside of wood product companies that are positioned to capitalize on the US housing recovery, weaker prices across most grades will limit operating earnings growth for most rated paper and forest products companies,” said Moody’s vice-president Ed Sustar. “The continuing weakness in the euro, Brazilian real and other currencies against the U.S. dollar should boost exports from companies operating in these currencies into markets where the commodity price is denominated or pegged to the U.S. dollar, as the strong dollar erodes the cost competitiveness of U.S. producers.”

For example, Canadian exports will continue to rise with improved competitiveness from the weakening of the Canadian dollar, reports Moody’s.

The ratings company indicated that operating earnings growth for producers in Latin America will remain unchanged at one per cent to three per cent. The depreciated local currency will continue to mitigate weak international prices and support local operating margins.

The outlook for the paper packaging and tissue sub-sector remains stable, according to Moody’s. “Most companies in this sector will generate flat to modestly stronger operating earnings (zero to two per cent) in 2016. Product prices will decline as excess supply that entered the market last year is absorbed, offsetting modest increases in demand. Cost improvements and synergies from recent acquisitions will contribute slightly to operating income growth, offset partially by slightly higher recycled fiber prices,” says the report.

Moody’s predicts that secular decline in paper consumption will continue to weigh on paper producers. “Our outlook for the paper sub-sector remains negative as we expect operating income for most producers will decline due to both declining demand and product prices. Paper consumption will decline as electronic forms of communication, such as smart phones and tablets, continue to gain popularity,” writes Ed Sustar, in the report. “This will be compounded by weaker prices in regions where paper producers have not kept pace with declining demand by aggressively idling paper machines or converting them to produce other paper grades.”

In Europe, earnings growth for Moody’s rated European producers is expected to be zero to two per cent. The producers account for nearly 25% of the industry’s total operating income. Within the region, increased operating earnings from packaging and tissue operations will outweigh those from paper operations, which continue to face the continued secular decline of paper consumption in developed markets. Moody’s analysts said they expect to see an increase in operating income from European wood-based building producers as larger investments in homebuilding and renovations strengthen demand for lumber and panels. Packaging volume is also expected to grow as the European economy improves.