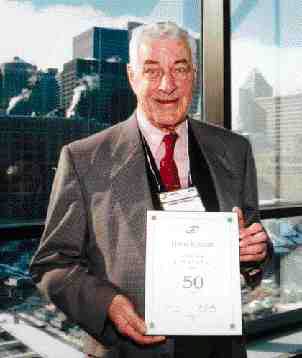 Henri Renault was honored for his 50 years of membership in PAPTAC.

DAVID EMERSON is a relative newcomer to the pulp and paper industry having been appointed president and ceo of Canfor Corp. in January 1998. But that didn’t stop him from telling his peers what he saw…

DAVID EMERSON is a relative newcomer to the pulp and paper industry having been appointed president and ceo of Canfor Corp. in January 1998. But that didn’t stop him from telling his peers what he saw as being wrong with the market pulp sector. He made his remarks during the first Open Forum sponsored by the new Market Pulp Producers Association.

Emerson said the market pulp industry looks like a standard commodity business with wild price swings around a long-term downward price trend. There is a tendency for the near term to be mistaken for the long term, he said.

The sector is a critical lesson in capital management. While real costs and prices are declining, “The industry has destroyed capital,” he said. The ROCE for Canada dropped below 0% in 1991 and got up to 20% in 1995 before dropping below 0% again for 1996 to 1998.

“We are now on the upside of the cycle,” he said. It is now that people “forget the need for change and lose the sense of urgency to establish a more stable basis for business.” He said the industry must focus on areas of potential strength, different pulps with different characteristics, and competitive threats which, he said, vary by business.

Emerson, who is the new chairman of CPPA’s board of directors, said that technology will not eliminate the use of reinforcement pulps of which Canada produces 5.8 million tonnes per year (Mt/y) or 98% of the world capacity. “There is a limited threat to our position from anywhere.” He said Canfor acquired Northwood to improve its position in NBSK reinforcement pulps.

Canadian BCTMP producers have struggled but now hold 61% of the world market and are establishing niches for their products. For example, he pointed to the use of aspen in printing and writing papers. Canada has about 11% of the world’s bleached hardwood market but our costs are out of line with those in Brazil and Indonesia.

“We mustn’t forget the fundamentals, “he said. He decried the loss of momentum in consolidation: “It’s a global business.” He also believes Canada has a technology deficit pointing out that R&D spending in the forests was US$11.16/ha in the US, US$0.84 in Canada and US$13.54 in Sweden.

He said it is a serious mistake to ease off when profits return. “We must walk the talk of fiscal discipline. We’re all in the same boat and the future depends on all of us.” Emerson said that Canfor’s goal is 18% ROCE before tax with a pulp price at US$550 and the Canadian dollar at 80 cents US. He closed by reminding his listeners that one in every four bales of market pulp is from Canada.

Next up was Mark Kennedy, senior equity research analyst for TD Securities Inc. He opened by saying that the average return for the industry is 12%: “It should be double.” He said the ROE has been about 3% over the past 10 years. However, he said there’s a possibility that could be 10% in 2000 and reach 15% in 2001.

The new chairman of the Market Pulp Producers Association is Eric Heine, vice-president, pulp sales and marketing, Domtar Inc. He outlined the focus of the new organization which is principally to advance the collective interests of Canadian market pulp producers and promote the competitive advantage of Canadian market pulp.