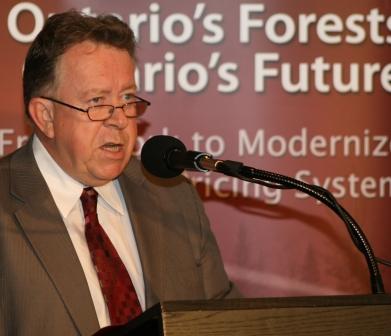 The Ontario government has released its proposed framework for modernizing the province’s forest tenure and pricing system. The cornerstone of the new system is the introduction of Local Forest Management Corporations (LFMCs) to manage Crown forests and oversee the competitive sale of Crown timber.
“The proposed new system would be flexible, transparent, and responsive to changing social, economic and environmental conditions and needs. It would also be designed to increase business opportunities for new entrepreneurs and promote market competition for allocating and pricing Crown timber,” says Michael Gravelle, Minister of Northern Development, Mines and Forestry.
The framework contains a proposal for five to 15 new LFMCs that would assume responsibility for management, marketing and sale of wood from Crown forests within their defined area.
According to the outline, the LFMCs are intended to stimulate competition in selling Crown timber. LFMCs are envisioned to be financially self-sufficient, managed by a board of directors. Net earnings of the LFMCs would be reinvested in the forest and paid as dividends to the government.
Timber sold by the LFMC could either be harvested by the LFMC itself, harvested and delivered by an entity operating under contract, or harvested by the buyers or for the buyers by entities operating under forest resource licences. Day-to-day activities of the LFMC would be directed by a general manager.
It is proposed that at least 25% of the wood supply in each management area be sold through tendered sales. The price from tendered sales would guide the prices for other negotiated sales. An information system to track the pricing information is suggested.
Comments on the proposed framework are welcome. Sessions for the public and stakeholders will be held across the province, or input can be submitted at www.ontarioforesttenure.ca.
Meeting dates are as follows: May 18 – Thunder Bay; May 20 – Dryden; May 26 – Marathon; May 28 – Toronto; June 1 – Hearst; June 3 – Timmins; June 8 – Pembroke; June 10 – North Bay.
A parallel series of sessions is planned with First Nations and Aboriginal organizations.
The review of Ontario’s tenure system began last summer.