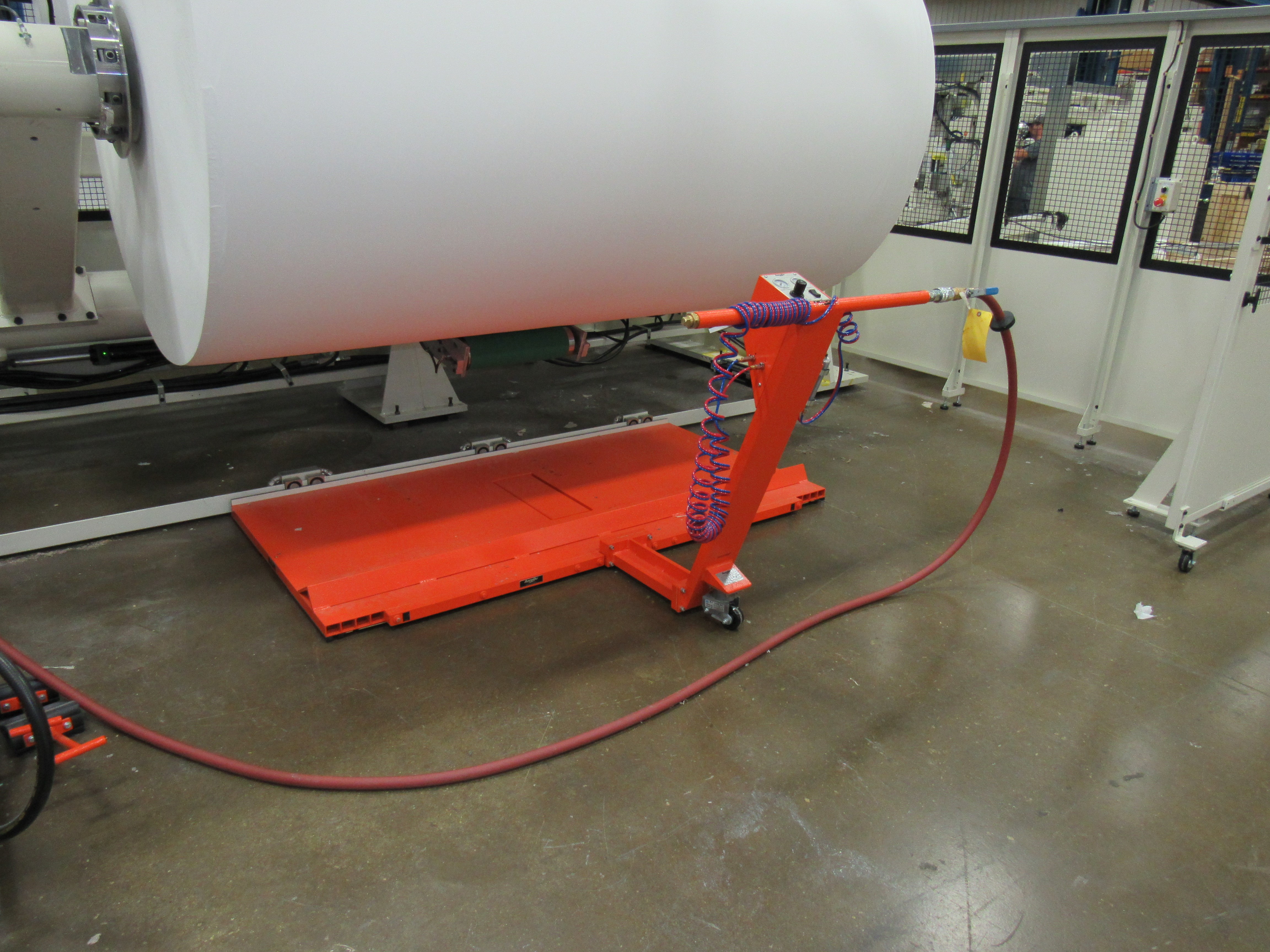 What do multi-million-dollar orbital satellites and million-year-old fossils have in common with paper manufacturers and converters? Hint: it has nothing to do with cost, size or age and everything to do with safe load movement.

Daily paper production and processing operations require the safe and precise movement of multi-ton paper, tissue, diaper and corrugated rolls. Bulky loads, such as three-metre wide, 5,000-kilogram (11,023-pound) parent paper rolls, must move from one station to another for conversion into smaller rolls. In addition to their sheer weight, these objects come in a variety of sizes and odd shapes, all of which require absolute precision when loading or unloading from converters and other machines.

Enter air bearing machinery, specifically an air caster rigging system capable of transporting mega rolls of paper products simply by floating them from point of origin to the intended destination, be it splitter, spindle or saw. First, operators load massive rolls onto a pallet. Underneath, standard factory-available compressed air then creates a cushion that lifts the entire load. As the load floats on this thin film of air, its movement is easily controlled by an operator with no risk of impact damage, vibration or friction of any type.

These are massive, cumbersome and oddly shaped loads, just like heavy but delicate, unwieldy satellites and fossils, but all are moved easily upon this cushion of air.

In general, air bearing-based equipment functions similar to a forklift pallet, with the exception of its legs, which are shaped in a 45-degree angle to slide under the paper roll. When operators turn on the compressed air, the air casters lift the pallet and engage the bottom edge of the roll. At that point, the casters can move any size roll via nearly frictionless movement, making it possible for a single operator to manoeuvre in all directions in an unrestricted manner for precise positioning of the roll at its final location.

Since each facility is likely to have unique requirements for load moving equipment, air caster systems have been developed in as many different shapes and sizes as paper production facilities might require. One example is an air caster mover composed of two independent pieces connected by a single small air hose. With two separate components interfacing with the rolls at either end, this mover can accommodate a variety of roll widths at weights up to 3,629 kilograms (8,000 pounds) using the same relatively small, inexpensive and unobtrusive equipment.

If a little more power and ease-of-handling is required, another type of air caster that connects the two independent components includes a handle with its throttle and controls at the operator’s fingertips.

The air casters can move any size roll via nearly frictionless movement, making it possible for a single operator to manoeuvre in all directions.

In some cases, facilities might install a small pit of a depth less than four centimetres (1.5 inches) in the floor underneath the paper loading area. An air-rigging pallet will then sit in that pit, flush with the floor around it. That enables the facility to place rolls in front of the paper machines, rolling them by hand onto the air pallet while a chock underneath locks the rolls in place.

Facilities can choose from a wide-ranging selection of air bearing equipment to accommodate a variety of roll widths and complete different operational requirements. Smooth operations require facility- and product-friendly equipment. Because air casters distribute heavy loads over a large surface area, they achieve low floor-loading levels that are impossible to duplicate by skates, rollers, wheels or other conventional methods. As a result, air casters do not create pits or scrapes in the floor surface. However, it’s not just the facility floor that is protected by the equipment – so are the loads.

Sometimes special steps may be needed to protect the load at the point of interface between the load-moving equipment and the roll. For example, tissue paper rolls are very delicate, so users will typically apply a protective layer, e.g. ultra-high molecular weight polyethylene (UHMW), to act as a buffer between the load-moving equipment and the paper roll.

Once the load has been moved to its destination, it’s time to put it to work. An air bearing system eases the process here. These paper rolls may be spinning at thousands of rotations per minute, so precision and balance are critical. Friction, vibration and even slight imbalances can place both machinery and people at risk, a clearly unacceptable situation. An air bearing system helps alleviate the risk because the load is literally floating and therefore frictionless. It allows operators to line the load up perfectly, so that the machine can then pick up the roll from the pallet and start to unwind it. 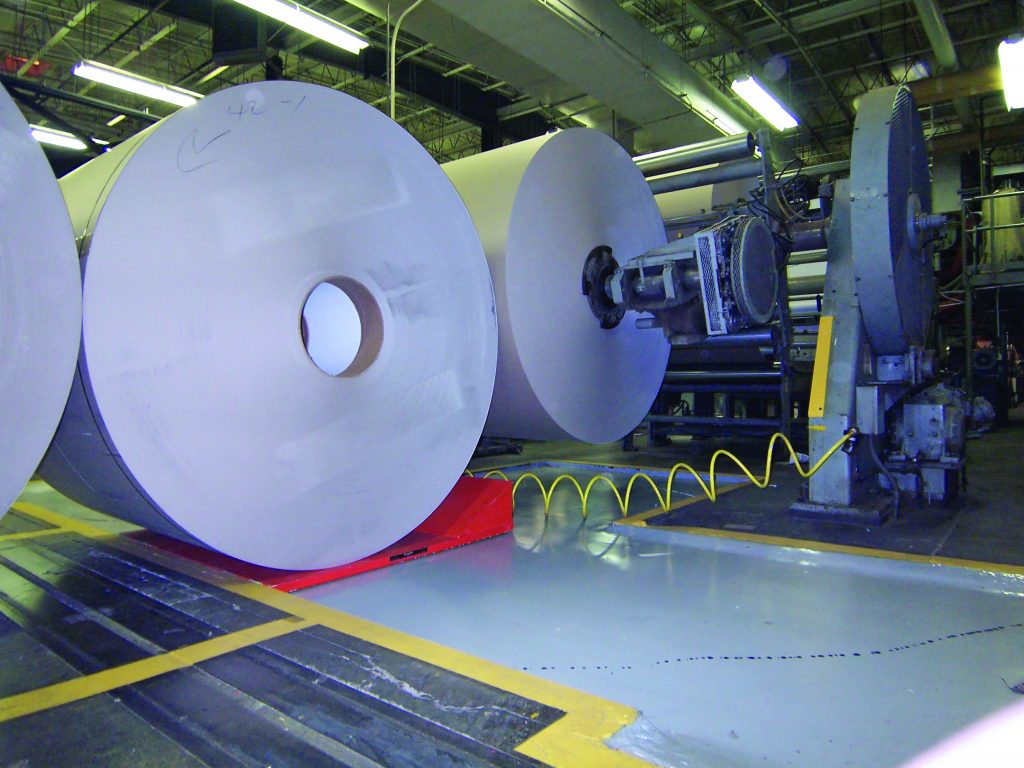 An air caster system in use at SmurfitKappa. Photo supplied by AeroGo

Long before the emphasis on ergonomics, rolls were loaded by people, which meant ongoing serious safety concerns. Only certain workers – very strong ones – were able to manipulate the loads, and they were not always able to complete their task safely. In 2017, Canadian workers suffered more than 56,000 back injuries in the workplace, accounting for the most injuries of any body part and 22 per cent of the total work injuries that year, according to the Association of Workers’ Compensation Boards of Canada.

Air-based moving systems greatly reduce the risk of these types of injuries. All the torque is eliminated because the load moves in zero friction. Also eliminated is the need for herculean-type strength. Virtually any team member can move the load. Strength requirements are unnecessary when a cushion of air is doing the work. Omni-directional movement requires only minimal force to move or turn up to a 5,443-kilogram (12,000-pound) load in any direction.

With an air rigging system, one person can smoothly transport, rotate and precisely position heavy paper, plastic, sheet metal or coil rolls without the use of a forklift or floor track system.

Randy Manus is a senior application engineer at AeroGo, Inc.

A condensed version of this article originally appeared in the Fall 2019 edition of Pulp & Paper Canada.