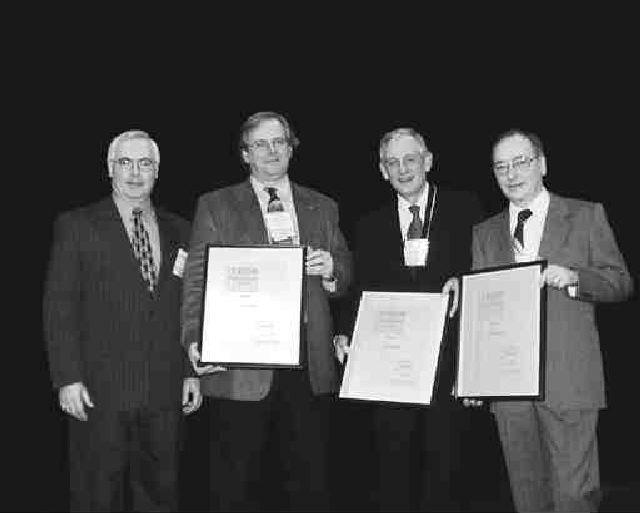 Ross Williams (left) presented the I.H. Weldon Award for the best paper presented at a PAPTAC meeting. The winners are (left to right): J.F. Houle

PAPER PLAYS A VITAL ROLE in preserving our national heritage. Published materials and written records are decomposing at an accelerated rate, prompting concerned individuals in and out of the paper in…

PAPER PLAYS A VITAL ROLE in preserving our national heritage. Published materials and written records are decomposing at an accelerated rate, prompting concerned individuals in and out of the paper industry, most specifically librarians, archivists and conservationists, to take action.

Sponsored by the Printing and Graphic Arts Committee, the Thursday afternoon session had four presenters, each discussing aspects of paper and printing to an audience of about 150 people.

Alan Bird, Degussa Corporation, presented the issues surrounding permanent papers and how they are being addressed.

“A large part of the inventories in most of the world’s libraries and archives are threatened with rapid decomposition,” Bird said. The reason being all papers manufactured between the 1850s to 1950s were acid-based. Libraries and other institutions have shifted to various methods such as microfilming, digitization of national collections, deacidifying books and archive materials or using simple preventive measures, such as copying on to stable alkaline-based papers, just to battle the widespread deterioration problem.

“Libraries and conservation communities are trying to ensure as far as possible that future materials are published on acid-free papers,” Bird said. “It is in the light of these latter concerns that there has been much discussion in defining permanent papers and in developing permanent paper specifications,” he added.

Past studies concluded that paper yellowing accompanies the development of brittleness and consequent loss of physical strength. This is especially true with lignin-containing papers, which yellowed rapidly when exposed to UV light.

“Although there was no definitive scientific work to confirm it, it was deduced by many that the yellowing of lignin-containing papers was an indicator of deterioration of strength,” Bird explained.

But new evidence suggested that previous assumptions about lignin were false, Bird said, as new research showed that yellowing and the loss of mechanical strength are two separate mechanisms. The research showed that the acidic nature of papers was the culprit, not the lignin.

“But these findings had failed to change the firmly held views of some of those concerned about paper permanence,” said Bird.

Recognizing the vital role of paper quality in preserving libraries and national archives of the future that will seal its national heritage, the federal government of Canada began an initiative to bring together various experts to find out the real issue and how they could address the problem. The United States government followed suit and began a campaign of its own.

The main findings of the Canadian program were:

Acidity, rather than fibre composition, is the most significant factor that affects stability of both lignin-containing and lignin-free papers in accelerated aging tests.

In terms of mechanical and chemical properties, there was no evidence to indicate any difference in the stability between alkaline lignin-containing and alkaline lignin-free papers.

The addition of calcium carbonate as a buffering compound is effective in improving the stability of both lignin-containing and lignin-free papers when exposed to air pollutants.

“It is important for all of you to know what we at the club are doing,” D’Alessandro said.

Established in June 1997, the club aims to promote reproduction quality at newspapers worldwide and to establish worldwide standards for acceptable color printing. Recently, the club has been tackling the issue of newsprint shade.

“Newsprint shade has been an issue of concern since process color printing in newspapers became an established way of doing business in the early 80s,” he said.

He explained that while several newspapers adapted USA Today’s newsprint shade standard, others developed their own.

“Soon, newspapers across North America were specifying their own unique newsprint shade specification and each became as unique as a company logo,” he added.

The tiles are now in the process of being evaluated and, according to D’Alessandro, they are in the testing stages of this project.

“We are now evaluating the tiles, sharing them with various newsprint suppliers and newspapers,” he said.

Finally, he announced that last year, 11 North American, one Latin American and 24 European newspapers were inducted into the International Newspaper Color Quality Club at the IFRA newspaper technology exposition held at Lyon, France, in October. More than 175 entries were received from newspapers worldwide, but only 36 garnered the 255 points needed to become a member of the club.

Poor web stability was the focus as he explained how it can contribute to slackness in the web, wrinkling and web brakes, not to mention how it can adversely influence print register resulting in excessive waste.

Lang, Valmet Automation, reported that Helprint Quebecor has found that on-line tension profiling has given the company an insight into the variability of its paper supply and how it affects press runnability and waste.

“The study has proved that tension profiles on the printing press are inherited from the paper machine or the supercalender,” Lang said. He further explained that as the tension profile cannot be controlled in the press, the correction of the profile must be done in the paper mill.

The study seemed to have found the key to avoiding waste and web breaks, according to Lang.

“To avoid waste and web breaks, the printer wants to avoid running rolls sequentially with very different tension profiles,” Lang said. “By knowing the typical tension profile characteristics of rolls cut from certain locations on the paper mill’s parent roll, the printer can identify and sort certain rolls so that they can be run in sequence without causing breaks or waste problems,” he explained.

“Application of water on paper during printing by heatset offset, conventional coldset offset, flexography and water-based gravure as well as during the coating process, distorts the surface of the paper,” said Grondin. He added that properties such as roughness and gloss deteriorate while caliper increases and swelling of the fibres in the surface, as well as weakening of the fibres occur. Parts of the fibres then protrude out of the plane of the sheet surface. This phenomenon is called “roughening by water.”

Grondin reported that Paprican has developed an improved method to determine the effects of water application on the caliper, roughness, and gloss of mechanical printing papers at water application levels comparable to those in offset printing.

“The technique can be used either for quality control within mills, or for preliminary evaluation of new furnishes,” he said.

Using the IGT printability tester, the properties of the paper are obtained with and without water application on the same strip to reduce the uncertainty in the determination. The same tester can be used to quantify the effects of water on the surface properties of commercially made mechanical printing papers. The same method, Grondin said, can also be used to evaluate the potential contribution of a mechanical pulp to sheet roughening by wate
r.