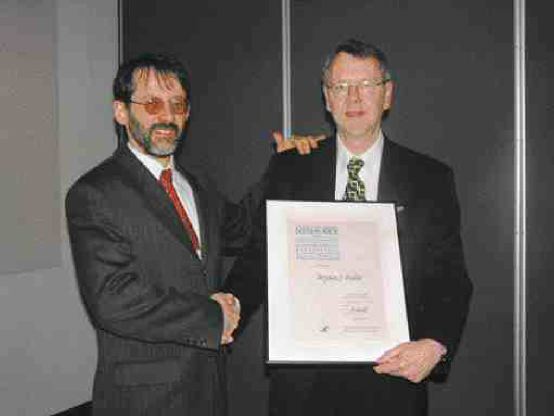 LEADING THE Mechanical Pulping Committee’s session was the presentation of the Douglas Atack Award, given for the best mechanical pulping paper at a previous year’s session. Daniel Ouellet of Paprican…

LEADING THE Mechanical Pulping Committee’s session was the presentation of the Douglas Atack Award, given for the best mechanical pulping paper at a previous year’s session. Daniel Ouellet of Paprican, the session chairman, handed the framed certificate to Bryan Fuhr of Alberta Research Council, who accepted it on behalf of his colleagues.

Created in 1990, the award, as PAPTAC put it, “recognizes the contributions of Dr. Atack, who has committed his working life to the science and technology of the mechanical pulping industry.” In his lifetime, he received many honours, including being elected a Fellow of the Royal Society of Canada in 1989.

Much of today’s research centres on better understanding the refining process, and thus achieving incremental quality and economic benefits. Such is the case with Oddbjorn Eriksen, a doctoral student at Norwegian Pulp and Paper Research Institute in Trondheim, Norway. Eriksen used a rather simple, yet high-tech, experimental set-up to find out what takes place during refining. “The purpose of the study was to establish rapid pressure measurements in the refining zone of a high-consistency refiner so as to gain more detailed knowledge about the refining action.”

To do so, he mounted a pizoresistive pressure-and-temperature transducer to a single-disc 510 mm (20-inch) pilot refiner, at a radial distance of 231 mm from the refiner’s center. The set up led to a sample rate of up to one million data points a second. Among his chief findings was that decreasing the plate gap increased the pressure, pressure changes happened during both chip feeding and step changes in refiner operations, and pressure peaks of up to 6 MPa took place at a small plate gap.

Marc Sabourin of Andritz in Springfield, OH, delivered a noteworthy paper on the effects of refining intensity — Characterization of paper properties from spruce and pine thermomechanical pulps: effect of refining intensity. While the TMP process has long been used, alternative methods are making their way into the industry. “High-intensity refining represents a growing trend in the industry,” Sabourin noted. “The process, which first started in Europe, has migrated to North America.”

His research focused on the effect of the RTS process at two paper mills: Stora Enso’s 300 000-tonne/year (t/y) SCA and SCA+ paper mill in Port Hawkesbury, NS, and Bowater’s 750 000-t/y newsprint mill in Calhoun, TN. The source material at the two mills reflected the areas in which they operated. Stora Enso’s was a 50:50 mixture of spruce and balsam fir, whereas Bowater’s was primarily juvenile loblolly pine with smaller amounts of Virginia pine and short leaf pine.

The results confirmed the chief benefit of the RTS process — mills use less energy and gain comparable paper properties to traditional methods like TMP. “Following the work, both mills converted to RTS from TMP in 2001,” Sabourin concluded.

Weaning the boiler of fibre

Energy reduction, particularly as it relates to steam recovery, was the theme of the presentation Fibre Accelerator: A new device for energy recovery in TMP and CTMP plants. K.-G. Ryrberg of Fiber Accelerator Sweden AB in Hagersten, Sweden, pointed out a new device, the fiber accelerator, to replace the pressure cyclone currently used in most TMP and CTMP mills. The main idea behind the accelerator is to reduce fibre carryover to the boiler. “The fibres in the dirty steam are accelerated by a high-speed rotating element in the fiber accelerator to achieve effective separation,” Ryrberg explained. “It achieves very low fibre carryover and operates at minimal pressure drop and with little sensitivity to changes in process parameters.”

A full-scale prototype has been installed at SCA Ortviken Paper Mill in Sundsvall, Sweden. From the operating information gleaned in eight months, the Swedish company fine-tuned the technology and developed two units. The first, installed at Holmen Paper’s Braviken newsprint mill in Sweden in March 2000, processes 260 tonnes/day of steam at an inlet pressure of 3.5 bar. “This unit replaced an old pressure cyclone located after the first-stage refiner in a two-stage single-disc TMP refining line,” Ryrberg said. “In this case, the backflow steam from the second-stage refiner was also connected to the fiber accelerator.”

A larger unit was installed last October at SCA’s Ortviken mill, which has been designed to process 500 tonnes/day of steam at an inlet pressure of 5 bar. It was installed after the primary refiner on a new double-disc TMP line. Both mills reported success, Ryrberg noted.