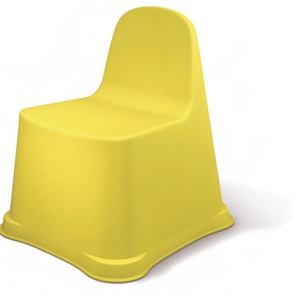 Sdra has developed a children’s chair made from pulp that is said to be both durable and waterproof, despite having the look and feel of ordinary paper. The chair has been named Parupu after the Japa…

Sdra has developed a children’s chair made from pulp that is said to be both durable and waterproof, despite having the look and feel of ordinary paper. The chair has been named Parupu after the Japanese word for pulp. It is recyclable, environmentally-friendly, stackable, and colourful.

The chair was designed in collaboration with design and architect firm Claesson Koivisto Rune, and made its world premiere at the Milan Furniture Fair in 2008.

The team’s objective was to make something that felt like paper but had the durability normally associated with materials such as steel, wood, or hard plastic. Working with Sdra and research company STFI Packforsk, Claesson Koivisto Rune experimented and tested the suitability of the material for use in a tough and practical chair for children.

The material is a specialty pulp from Sdra Cell combined with PLA, a biodegradable plastic made from maize starch and cane sugar.

The chair’s base material, which can be moulded and could potentially replace plastic in a number of applications, has been named DuraPulp. A piece of DuraPulp only a couple of millimetres in thickness is enough to support the weight of a person. It can be left outdoors for several years without degrading.

“DuraPulp is also suitable for producing quality packaging and labels, and can be run perfectly well in a normal paper machine. Our hope is that the chair will create interest and ideas amongst our existing customers as well as leading to discussions with new customer groups and new markets,” she says.

labour agreement and apply changes to its pension program that were to take effect on May 1.

Prior to seeking bankruptcy protection, AbitibiBowater unilaterally rescinded pension benefit improvements that had been negotiated in an earlier collective agreement and were to take effect on May 1. According to the Globe and Mail, lawyers for Abitibi told the court the company could not cover the cost of about $68 million to pension fund payouts to allow for early retirement at 57 instead of 58 for some workers.

Highlighting Abitibi’s reach in Quebec, the judge overseeing the company’s restructuring had to excuse himself from this pension motion because his father is among the company’s pensioners.

SFK Pulp felt the effects of Abitibi- Bowater’s restructuring immediately, as the insolvent company terminated fibre and bark supply agreements for SFK’s mill in St. Flicien, Que. Under these agreements, Abitibi supplied about 80% of the fibre requirements of that mill.

“We intend to continue our discussions with Abitibi to establish a fair price for black spruce and jack pine wood chips. During ongoing negotiations between the parties, Abitibi offered a minimum of 500,000 metric tonnes/year of wood chips and an adequate volume of bark to SFK Pulp. We are also firming up our business opportunities with other wood chip suppliers that are not already under contract with Abitibi,” reports Pierre Gabriel Ct, president and CEO of SFK Pulp.